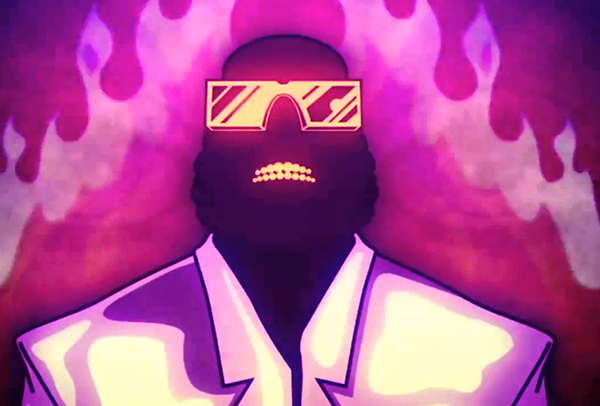 The recently unmasked rapping alter ego of Steven Ellison (better known as Flying Lotus) drops a debut mixtape which snippets from sent the hip-hop world abuzz earlier this year. With much speculation over the identity of the masked crusader (even Dublin rap upstart Rejjie Snow made a claim, and probably gained a few Twitter followers in the process), Duality sees FlyLo return to the airy playfulness of his early career, following the sombre and mature Until the Quiet Comes from earlier this year. Production wise, Ellison takes a back seat, only handling a couple of tracks as the crème de la crème of Brainfeeder (Jeremiah Jae, Samiyam, Teebs) handle most duties.

Exuding confidence on the mic from the get-go, the only thing hindering the budding rapper is the extensive use of a voice changer and pitch shifter, which disturbs the flow of the record, necessary as it is to preserving a hidden identity. Tracks like Mighty Morphin’ Foreskin feature some of the most impressive production of the year, while lyrically the record occupies the same universe as Odd Future, putting it at odds with Until the Quiet Comes (duality, geddit?). Tracks segue into each other seamlessly and an old-school hip-hop sensibility is present throughout; Just Blaze joint ‘The Ritual’ showcases some seventies funk that Huggy Bear might have grooved to. ‘Between Friends’ features crystalline production as a grown-up Earl Sweatshirt throws down a couple of verses, Murphy’s frenetic flow vibing perfectly with his lackadaisical style.

The comic book thematic that everyone on Brainfeeder seems obsessed with enters mid-way through; ‘The Killing Joke’ loops a haunting carol-like sample with dark undertones setting the mood perfectly for the ominous, low-pitch rant about hidden identities, complete with vocal samples from The Dark Knight. Murphy reaches for the heights of ghetto high life on ‘Immaculation’, with a grandiose beat and a cinematic scope that puts Good Kid, M.A.A.D City to shame. There’s a new-found passion here for the music that FlyLo had a huge part in founding, but always veered away from himself.

“I figure I’d do anything to keep my youthful innocence” we’re told at the mixtapes close. At a time when Ellison’s production career has matured to a staggering level of novelty and experimentation, Duality keeps it real. The record splices intermittent Jim Jones-esque samples talking about the allure of being a cult leader throughout. By the end; we’re convinced.