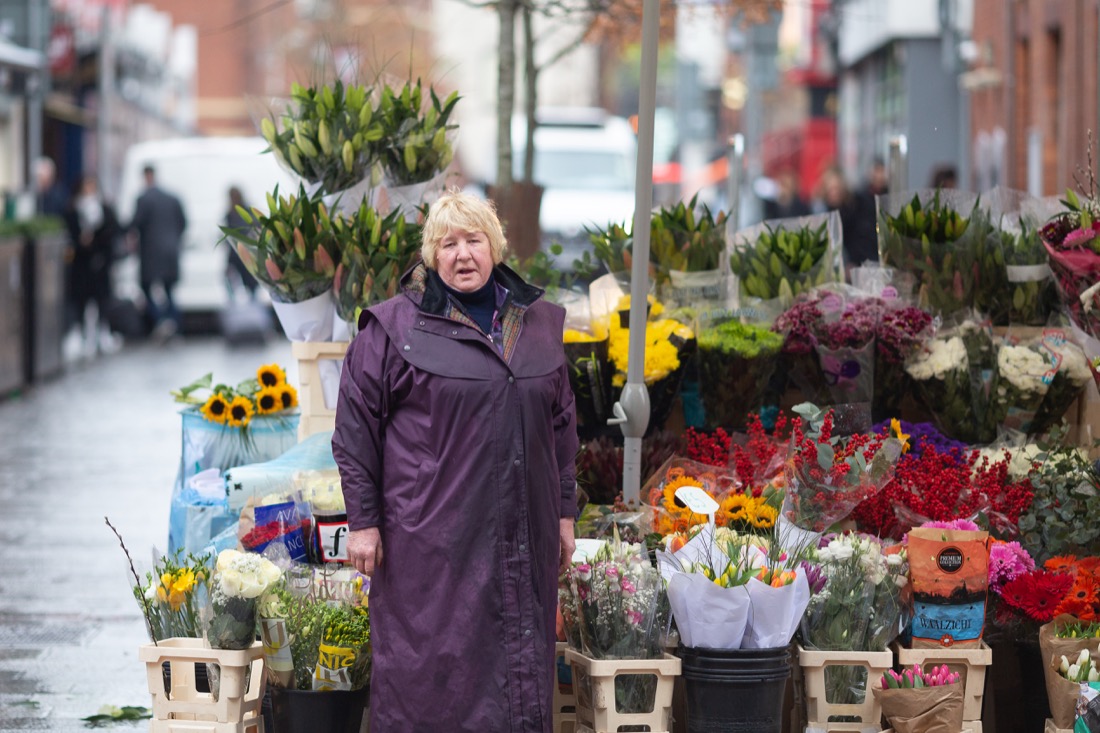 “Don’t mind them telling us to leave, sure they’re on drugs. I’m not movin’.”

The street flower sellers of our city came under threat last month but they are resilient in more ways than their detractors may think. We spoke to two of them and photographed three.

Back in August, the Hines Pan-European Core Fund made a complaint to Dublin City Council, saying that flower vendors on Grafton Street were cluttering up the street. Hines are one of the city’s biggest landlords, owning several premises on the street that including Claire’s Accessories, Fields Jewellers and Hickey’s Pharmacy.

After uproar from the vendors and the public, the complaint has been withdrawn, but it’s a scary reminder of how big businesses are stripping away Dublin’s soul. Many of these sellers are family businesses and a quintessential part of the city. To lose them, would not only further dilute our culture, but eradicate a tradition that has sustained these families through generations. 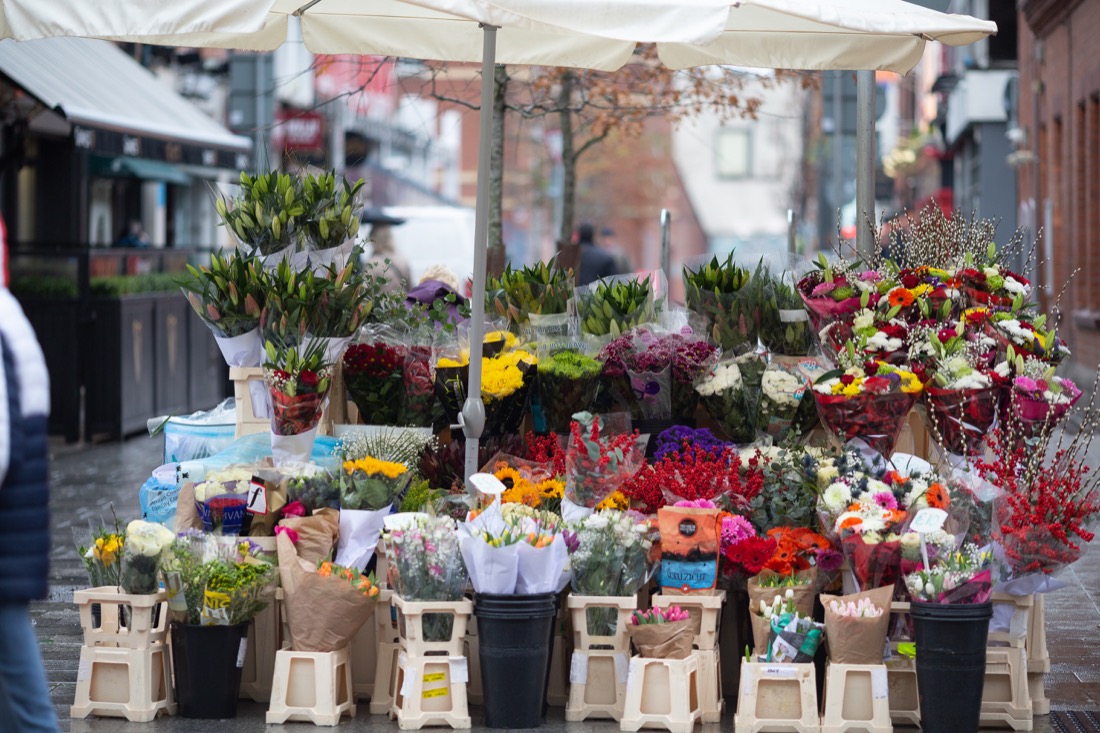 As the dust settled, Totally Dublin went on the streets to talk to these women, about their role in the city, their favourite memories and their fears about what the city is becoming.

“I do love it. Even if I’m ninety, I’ll still come down. Because I think when you give ‘er up, that’s when all your complications start. It’s me life, it’s all I know.” 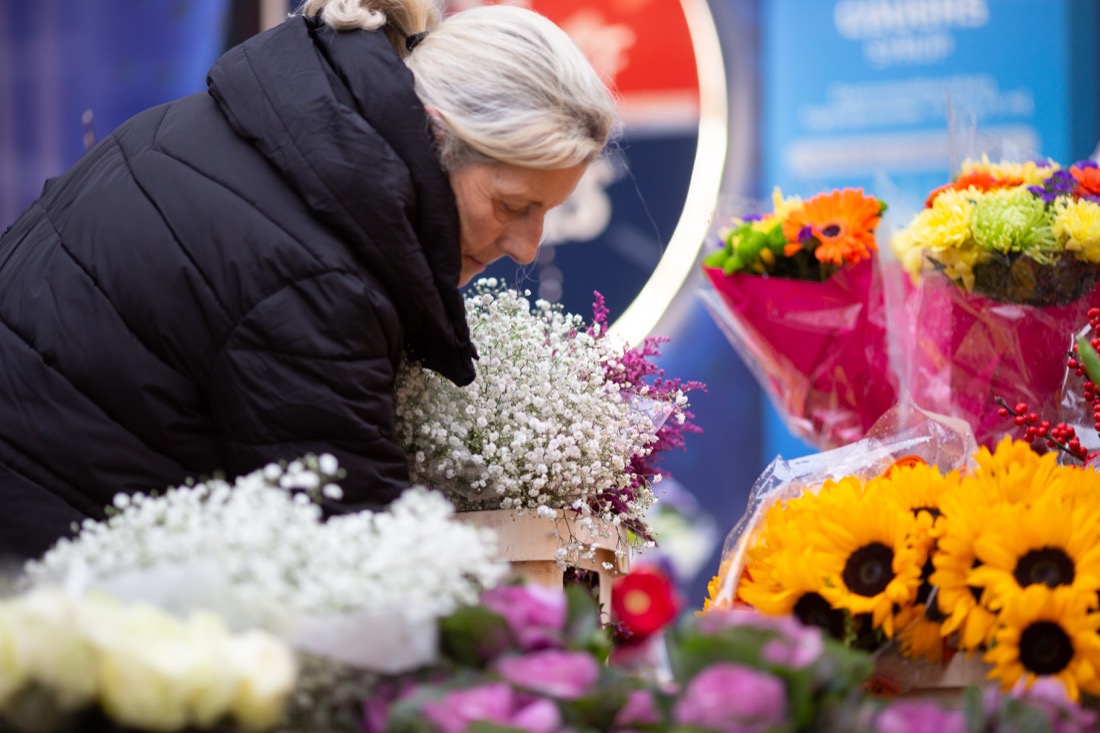 “I thought it was candid camera because I’m always getting stung. I was like ‘jaysus are they for real?’ when I realised what was going on. They put in a letter to the Council but I think they ignored it.

I don’t care. I’m all me life in here. I’m talkin’ over 200 years my family go back. It went down from me great grandmother, to grandmother, me mother to me. And there’ll be fuckin’ no one who’ll take me out. They’ll have to shoot me in the street. I’ll keep coming back.

I know nothin’ else. And how could you teach a 60-year-old dog how to chase a bone? That’s not gonna happen love, nah I swear, I’ll buy grenades and all. I’ll fuckin’ whack them out of it.

Men that don’t even live here are comin’ in and tellin’ us how to fuckin’ live. How dare they even have an opinion. Doesn’t matter, rich or poor, no way. As long as there’s a bit of breath in me body, it’s not gonna happen. 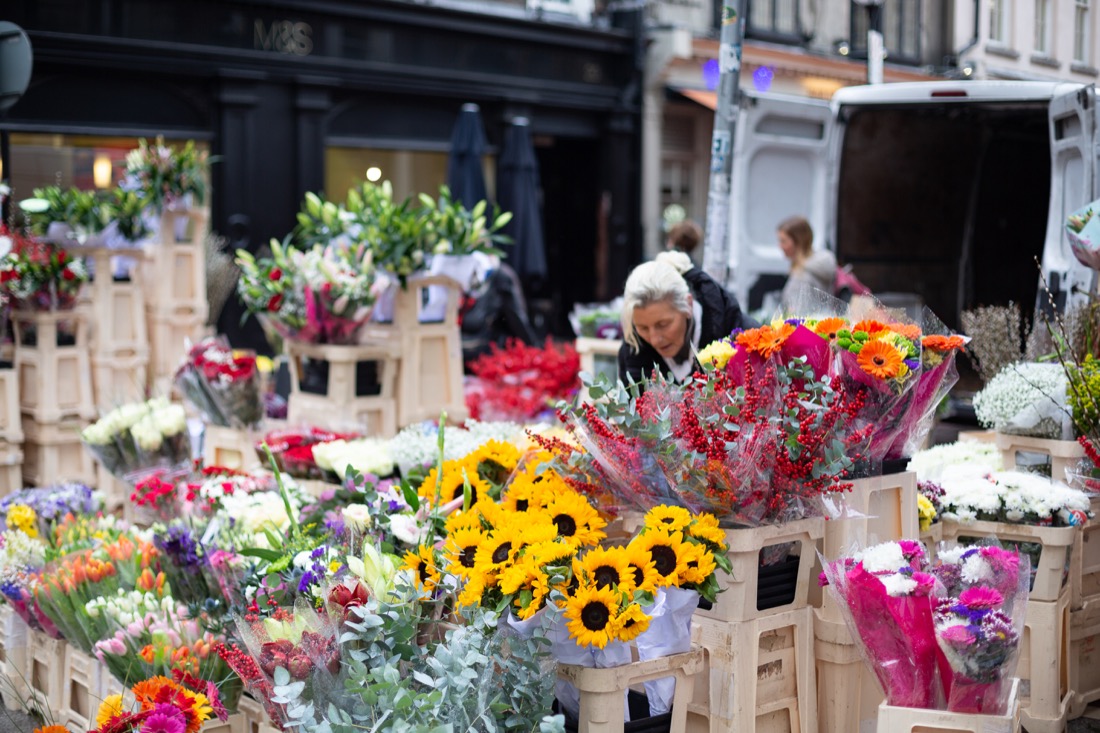 I met a lot of famous people. I was talking to this man, a gentleman, for a half an hour. He asked me if I was cold. I said ‘ah the bleedin’ weather’d do your head in. And I told him, there’s a fella over there after takin’ your photograph, but you wanna watch cuz he might have ya in the papers as selling flowers. He just laughed and said ‘would ya like a coffee.’ I said his coat was lovely, and he asked me if I wanted it, but I was only messin’

Then a fella said to me do you not know who he is and I said ‘no, I know his face but I think he drinks in the pub I’m in.’ And he goes, ‘that’s Eric Clapton!’

I think it was about six months later he lost his boy. I lost a boy through suicide ten years ago. These people think they can get to me, they can never break me but I’ve gone kind of very different because of the death of him.. 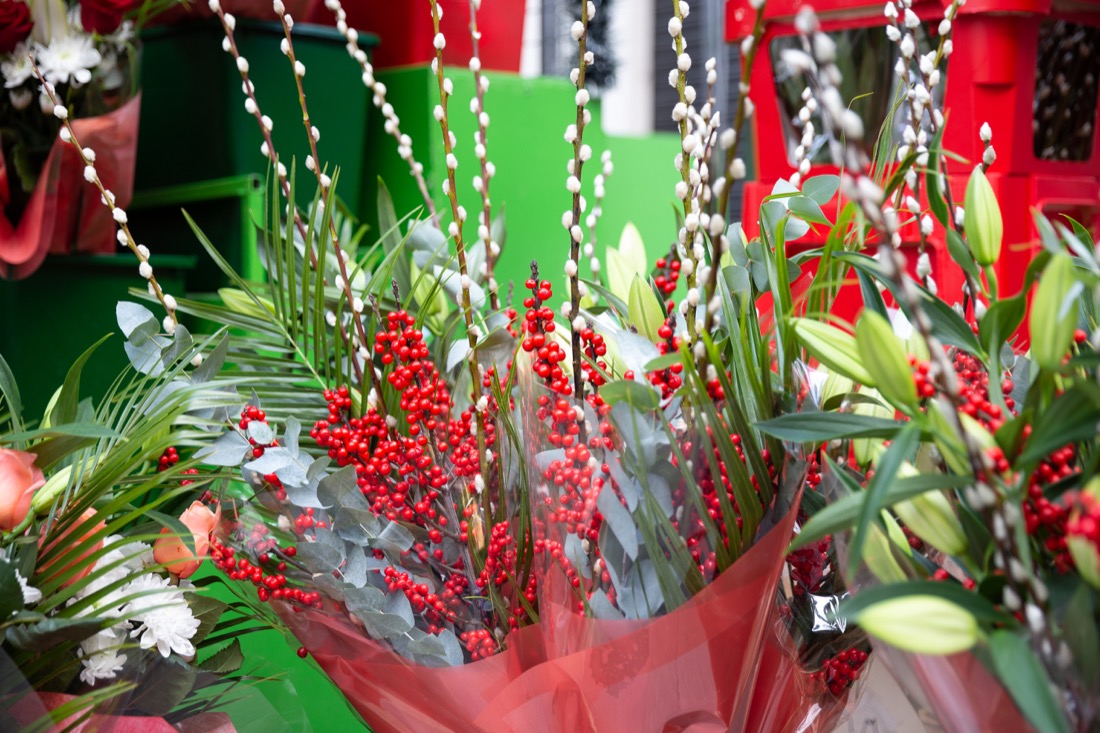 It took me a long while to come back out. People started sending me cards, telling me to come back and do me best. And I did eventually. It was horrible coming back. The death of him wasn’t nice, I’ll never get over him. Part of me is gone. But I have his little girl, she’s fourteen now. At least I have something of him. She stays with me on the weekends. She’s a lovely little kid.

I used to bring all me kids down here, they used to sit in flower buckets behind me. We used to have big boxes that we’d have hay in, and they’d fall asleep in them. They’d wake up and you’d run up, feed them, bring them down, change them, sit back, they’d be grand. 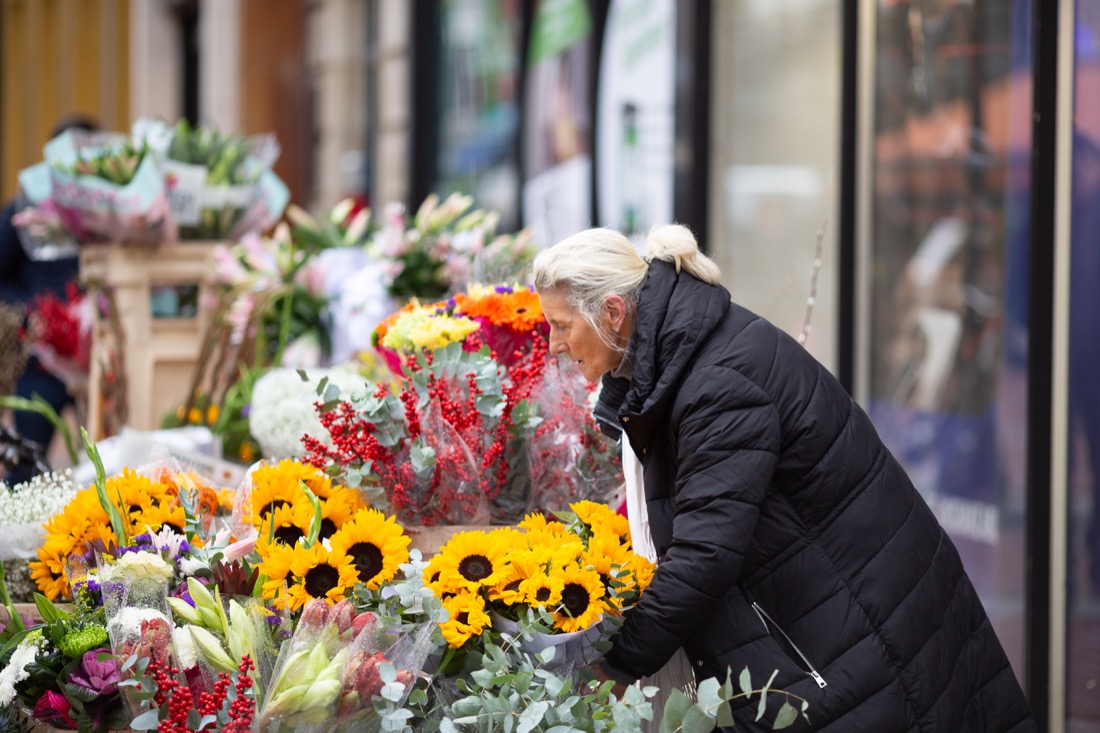 Kids used to just play all round the shops. Everyone knew them. Even the police used to bring them round the police car, because he used to love the sirens,

I do love it. Even if I’m ninety, I’ll still come down. Because I think when you give ‘er up, that’s when all your complications start. It’s me life, it’s all I know.” 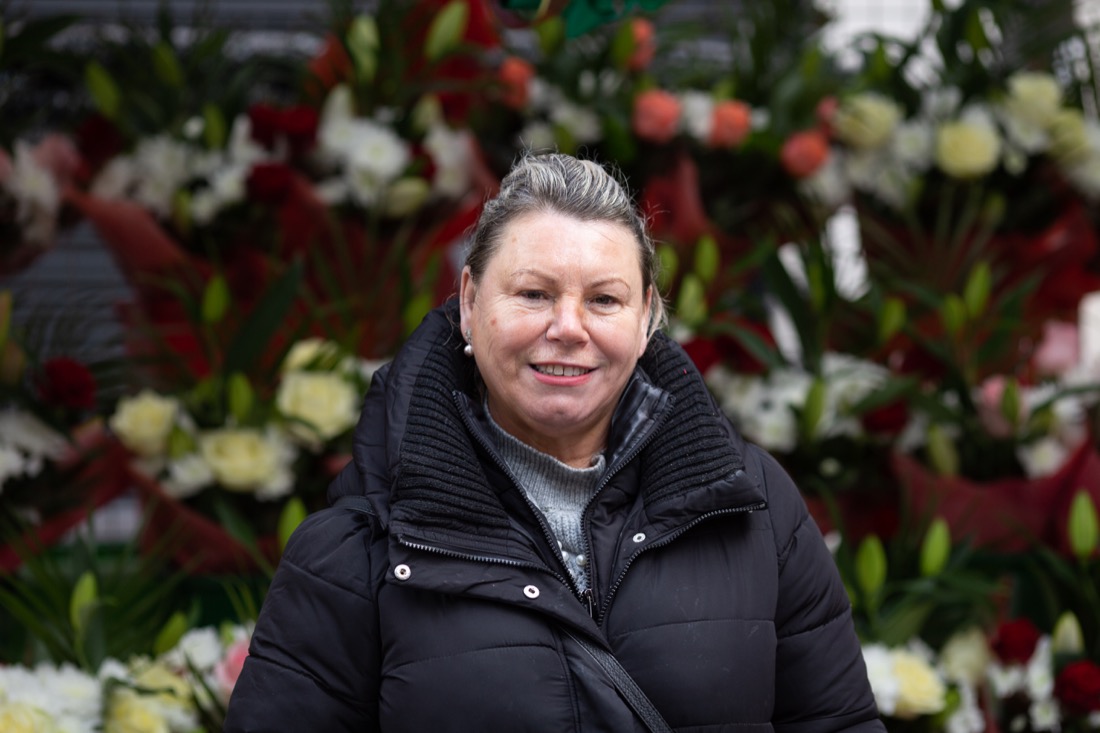 12 years ago we’d have people on prams sellin’ everything. Apples oranges, pears, on the prams. And it brought culture to Dublin. Everyone would be takin’ pictures of the prams, they just thought it was amazing that people could wheel prams into town and sell off them. That was the way it was but it’s died out now.

They want it to be an Eastern European city, so they want to make it beautiful and there’s just no room for it in this place anymore. All the big buildings, all the big shops that are after comin’ in. That’s it, you just have to make way. We’re only little people, we’re only goldfishes in a big shark bowl.

We don’t have a say in it, we’d never be able to fight them. We’re backed into a corner. It’s very very hard, even for the shops and ourselves. Everyone is shopping online. They say 300,000 people pass through this town every day. Well I’d love to see even 50 of those 300,000 buy off me. I’d be one happy, lucky bitch if they did! 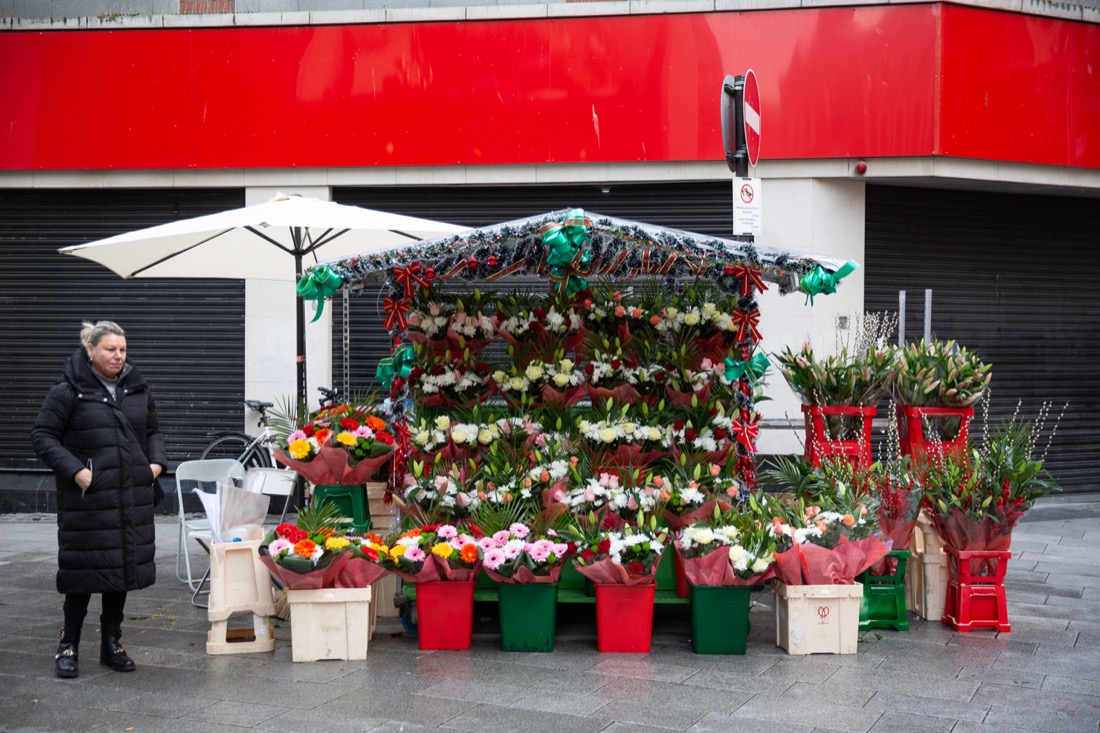 [This flower stall] was me husband’s auntie’s, and she gave it to me daughter. It is a family business. That’s the way it is. I have great memories, you’d never buy them again. We had a stall here when we were kids. Used to have to stay out all night to get your pitch out on Henry Street for the first of December.

We’d sell balloons, balls and tinsel, because at that time, there were no pound shops. You’d get all your decorations on Henry Street. That’s where you came for all your stuff, you’d get your chains, tinsel, Christmas trees, wrapping paper, gift cards, everything. 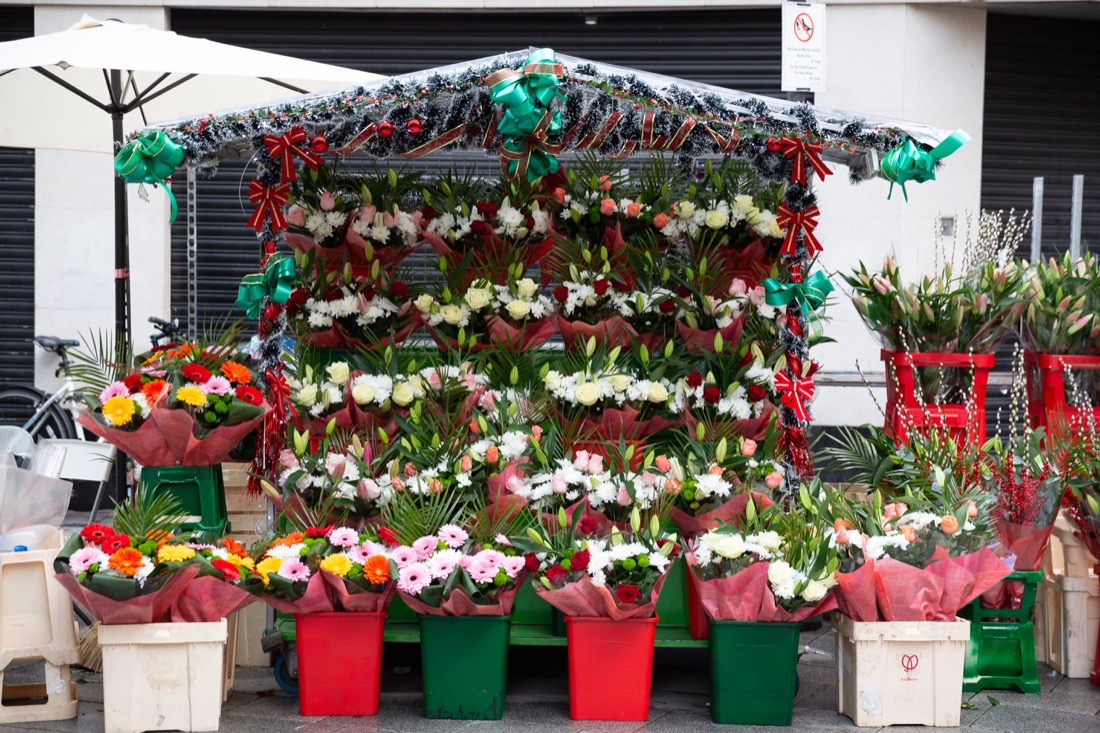 Everybody helped one another and looked after one another. If you finished, then someone else would help ya, and that would go along the street.

It was selfless days. Money didn’t matter. You needed it to survive but when you had it you didn’t think about it. And if you didn’t you just went out to get more.