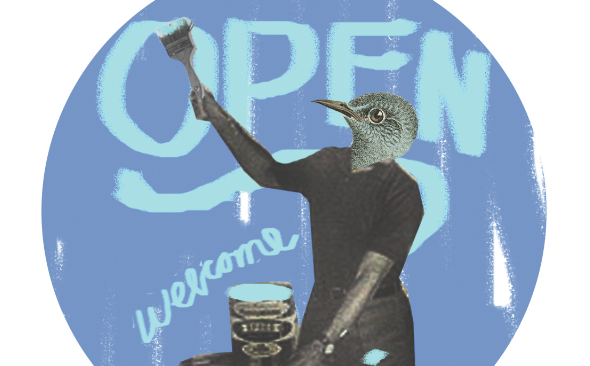 “Our culture has been dumbed down, aesthetically especially.” So says one of the many charismatic, paint-stained talking heads that make Faythe Levine and Sam Macon’s curio of a documentary, Sign Painters, such a convincing rally cry for the revival of the almost-lost craft of manually-made shop signs. The irreplicable nuance of hand-drawn type cuts through the film’s chosen swathe of dodgy vinyl-cut signs, placing the painters in the same league as tattoo artists, jewelers, carpenters and the whole slew of other craftspeople whose human touch we depend on to reassure us that the industrial and technological revolutions didn’t entirely mechanise the production of the stuff we want to spend our money on.

Like all documentaries, of course, the agenda of the film-makers is quite obvious in its directorial selectivity. While the valorisation of hard-working folk clinging to their craft is perfectly honourable, the nostalgia somewhat monochromises the question at hand. For one, there’s a reason 95% of new shop-owners go for the cheap fix: because it’s cheap. And while vinyl-cut shop signs on the one hand appear a lazy man’s option, it’s not as if a sentient computer somewhere in an industrial estate is churning out rote, one-size-fits-all signs. Vinyl signs allow just as much scope for personal flourish – Lincoln Place’s Makeshop, the Lighthouse Cinema’s monolith and Block T’s multicoloured logo all stand as proof of this.

The dangers of our current fetishisation of the artisanal are nakedly apparent across the city as an economy of faux-craftsmanship and pseudo-ethical sourcing has quickly poked its way through the debris of the crash. I will refrain from naming one recently opened café whose hand-painted shopfront and upcycled furniture smokescreen a bandwagon hop of the most cheeky. As per the shadiness of ‘guaranteed Irish’ pork that earns its brand through loopholes, we are all too willing to buy into these distortions to maintain a quasi-rural lifestyle that is all too much effort to actually keep up. Those laudable restaurateurs who visit the farms where their pork bellies are swelled and butchered, the furniture makers who make a loss for five years before building up enough buyers willing to pay significantly more for their expensive designs and the brewers who aren’t buying in ready-distilled alcohol and pretending the bottling is the entire process all face being mired in the artifice of cottage industry – in the supposed escape from homogenisation, we risk becoming bound right up in it again.

The only solution, of course, is to ask questions, and to meet the maker. In this regard, props are due to Colin Brady and Toejam for putting together their own mini-documentary on Dublin’s sign-painters, Gentlemen of Letters. Amongst a dozen choice quotes, sign-painter Kevin Freeney surmises the situation best: “if more shop-owners took a look at the street around them we’d have a better city.” To extrapolate: if more shoppers take a look at the shop around them, we’ll get it right.

Gentlemen of Letters is streaming here.