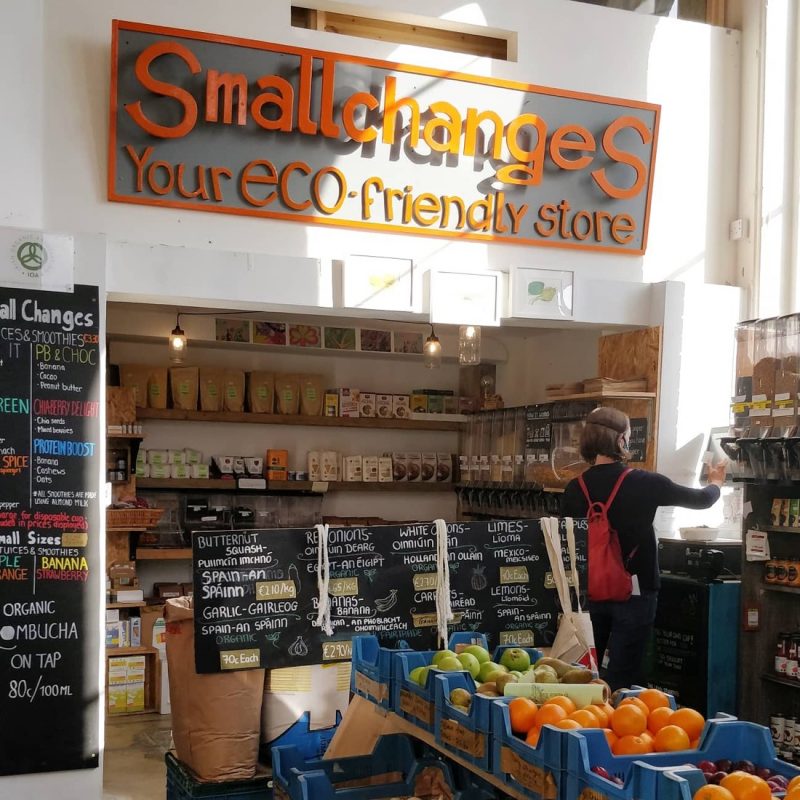 Great news for Inchicore with this week’s announcement that the popular organic wholefoods and household refill store Small Changes is getting ready to open a new outlet there in April.

Small Changes is in the business of zero waste products, taking in surplus produce grown by locals in their gardens, in exchange for store credit. They also refill old bottles with olive oil, apple cider vinegar and even washing detergent. They launched their first shop in Gorey in 2010, moving to Drumcondra in 2015, where they opened their first Dublin based store.  As we look forward to seeing them open their second premises in Dublin ahead of their eleventh birthday celebrations this July, we revisit our 2017 interview with founder Peader Rice, who spoke to us about the small independent business and the importance of re-igniting the idea of community and sustainability. 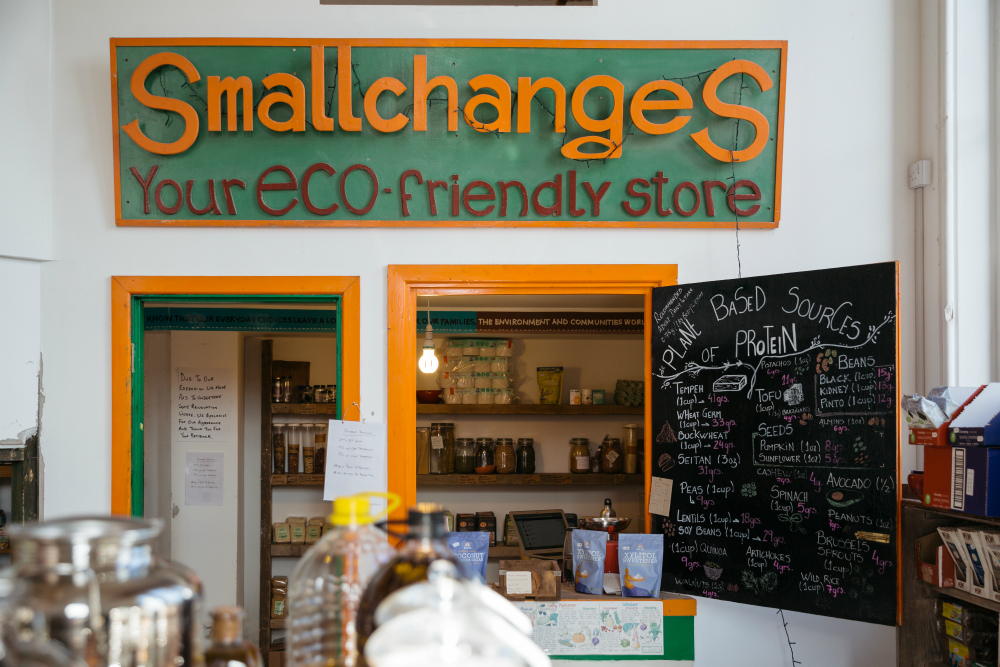 On the weekends, the Arts and Business Campus (ABC), a community centre in Drumcondra, holds an outdoor arts and crafts market. One recent rainy Saturday afternoon, while vendors were winding down and tables were being folded up and carried inside, Peadar Rice was outside, sanding a piece of wooden scaffolding. It was to become a shelf for Small Changes, a wholefoods store of which he is the founder and co-owner, located within the ABC. When he came in to wash his hands and answer a few questions, children were out in the hallway, getting picked up by their parents after ballet.

He started Small Changes in Gorey and transplanted it to Drumcondra in 2015. Two months ago, Naomi Sheridan joined the business, as a partner. She had previously worked for various multinational companies. “When you’re a part of a multinational or a big chain, you’re so far removed from the end user,” she said. And so far removed from the end product, too. “Where did it [the product] come from? You don’t know.” She eventually left to do something else. 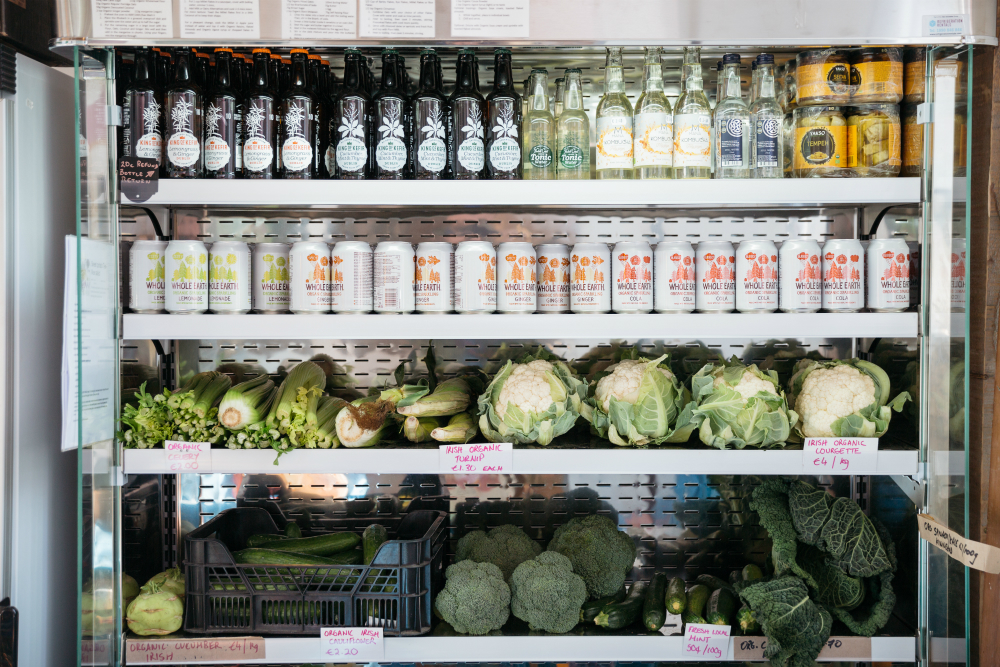 The blueberries on sale at Small Changes that afternoon were from a customer. She had been picking them at Derryvilla Blueberry Farm, in Co. Offaly. Of the two kilos that she picked, only a handful remained. “It’s actually quite difficult to get Irish, natural, chemical-free berries,” Naomi said. Ditto for bananas. Fyffes is the biggest supplier. They have organic bananas, but sell them at volumes too big for a small shop.

The courgettes and the garlic were from the NCAD Community Garden. They came in small bushels. The potatoes, spinach, kale, corn, turnips and cabbage were from Spring Cottage Organic Farm, in Co. Westmeath. The cooking apples were from a woman in the area who had an excess of them in her garden.

Small Changes takes in surplus produce grown by locals in their gardens, in exchange for store credit. They will also refill old bottles with olive oil, apple cider vinegar or even washing detergent. 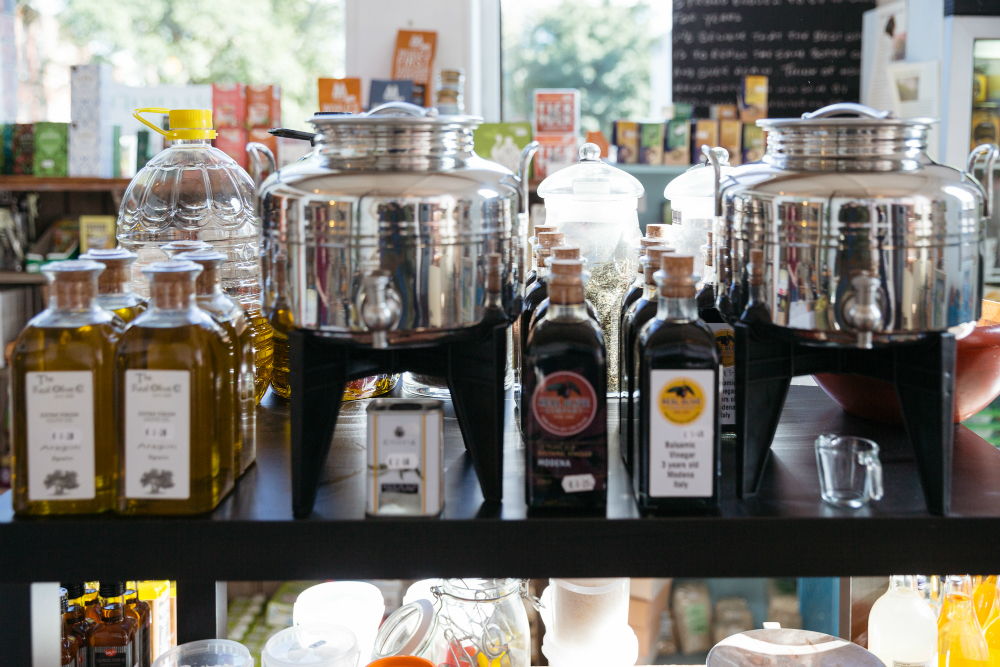 “What we’re trying to do here [in Drumcondra] is we’re trying to re-ignite the idea of community [throughout the country],” Peadar said. He chose to locate the business in Drumcondra precisely because it had a sense of community, because it had facilities like the ABC. (The building was an orphanage before it became a school for deaf children. The space now occupied by Small Changes was the chapel. Naomi told me that it was only by chance that she entered the ABC, the day she met and got to talking to Peadar. “This building kind of has a habit of drawing people to it,” she said.)

Small, independent businesses like Small Changes are only as vital as the communities that sustain them—communities that are, in turn, sustained by the small businesses. At work here is a self-reinforcing feedback loop, like a customer who brings berries to a shop and buys garlic from it.