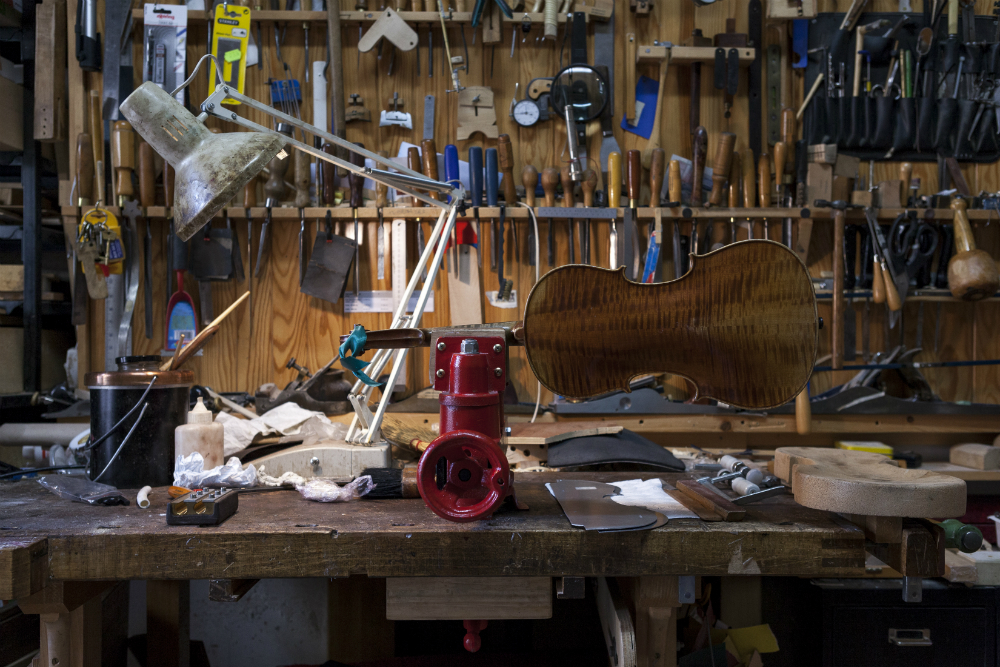 A niche profession in some instances, a vanishing trade in others; we talk to the master craftsmen who serve dwindling demands with pride and passion.

“I started off playing the mandolin when I was 7, and played the tenor banjo for 30 years before I started on the violin. There was always music in the family: when I was a kid growing up in the 60s, I would listen to my older brother play. He was a member of a show-band called the Statesman, and they used to practise in the small parlour-room. There was a table in the room that took up most of the space, and I’d be sitting underneath it listening to them. They could never get a drum kit in, so the drummer used to come in and play his sticks on an old banjo. Before then, my father would be playing the banjo-mandolin – he was a very good singer, a tenor, and my mother was a singer as well. They enjoyed having a pint and having a sing-song. It was regular that there would be people back on a Saturday night; my uncle would play the accordion and my parents and their friends would be singing along.

“We’re originally from Ballyfermot and before Kylemore Road was there, there used to be allotments. We used to walk by them to the canal, to go fishing with the dogs and the like. The travellers used to have these yellow barrel-top caravans – one day I was walking by one of them, and this massive, amplified sound came out that I still think about. I didn’t know who it was or what type of banjo they were playing, but on reflection it was more than likely a recording of Barney McKenna from the Dubliners. It was also more than likely to be the Keenan’s caravan – they’re a famous traditional music family, Paddy Keenan being the most notable. But when that sound of the banjo came out of the caravan, I said, ‘I want to do that’. That really got my interest going.

“I got into making through necessity. For fifteen years, I was making mandolins and mandolas – just one or two a year, for my own personal interest. Anytime I made one that turned out okay, I’d sell it and then I’d buy working tools. Up to this point, it was all self-taught. I’d started to find out things from luthiers and source materials, so I was getting into it at that stage. I was learning more and more about the wood tools.

“I had been working for the Electricity Supply Board (ESB), in the Transport division, and they eventually started to get rid of the area I worked in – they broke up the ESB in different sections. So I decided it was time to go. All opportunities for promotion, and all the things that could have happened, were gone, so I would’ve been left doing exactly what I was doing for the rest of my life – and I didn’t want that.

“That really gave me the push to leave the ESB and do a three-year, full-time course in violin-making at the Newark School. It was always a dream of mine, so I wanted to soak up as much as I could. They had 400 years of technology there, so many resources. I’d left school at 16 years of age, so this felt like my college time – a much more mature college time!

“In Europe, you had three other major violin-making schools: one in Mittenwald in Germany, one in Mirecourt in France and one in Cremona in Italy. But these had restrictions – in some, you had to be under 18 years of age, in Cremona you had to speak Italian.. but young people don’t know that they want to be luthiers, you know? It’s something you develop into.

“There’s never been a history of violin-making in Ireland. Going back to the 1700s, at the time of Stradivari, there was a maker in Dublin who was very prolific – Thomas Perry, he had a family-run business. His instruments were considered composites – each part was made by a different member of the family, his son-in-law was also involved – but nevertheless his instruments were very good. He used to have visiting luthiers, coming from Paris and London, working with him for a year or so.

“There was always good work produced by Thomas Perry, and his output was enormous: he made over 5000 instruments. Stradivari lived until he was 96, and he made 1600!

“There’s loads of professional luthiers out there in the world, and really good amateurs, playing on Perry violins. During that 18th century period, there would have been some other violin-makers around. They wouldn’t have been huge, their output wouldn’t have been very big, but one of them was Richard Tobin. He was by far the best – he was like the Irish Stradivari. But since the 1800s, there have only been amateur makers in Ireland. There were some luthiers making a full-time living from it, but their work would be mostly repairs.

“Occasionally you’ll get special requests: I had one customer who ordered two violins from me, he was from Graiguenamanagh in County Kilkenny, by the river Barrow. The river head has relief carvings, on the bridge, of an ugly man’s face with a beard made of fish and there’s a sheep at the top of his face. He wanted me to craft that on the violin, instead of a scroll. You’re making it down tiny so you’re losing a lot of detail, but you’re doing your best to make a representation of it. The violin turned out nicely, and he came back to me with a picture of his grandmother – he wanted his grandmother’s face carved onto one!

“You never get paid properly for doing this – violin-making is a total indulgence, something that you do because you’re really passionate about it. The repairs are the bread and butter – that’s what keeps you going. Instruments that I was selling before the 2008 crash – second-hand German and French instruments – couldn’t be sold for near the same price now.

On average, I make four instruments a year. In the past, I used to strive to make one cello a year, but in the future I’m going to be making less than that. There’s three months involved in making one… Varnishing is surprisingly time-consuming. You’d varnish one over a period of two months. There’s a considerable amount of time. To make a violin white model (unvarnished) takes 200 hours, so the process takes around 5 weeks. 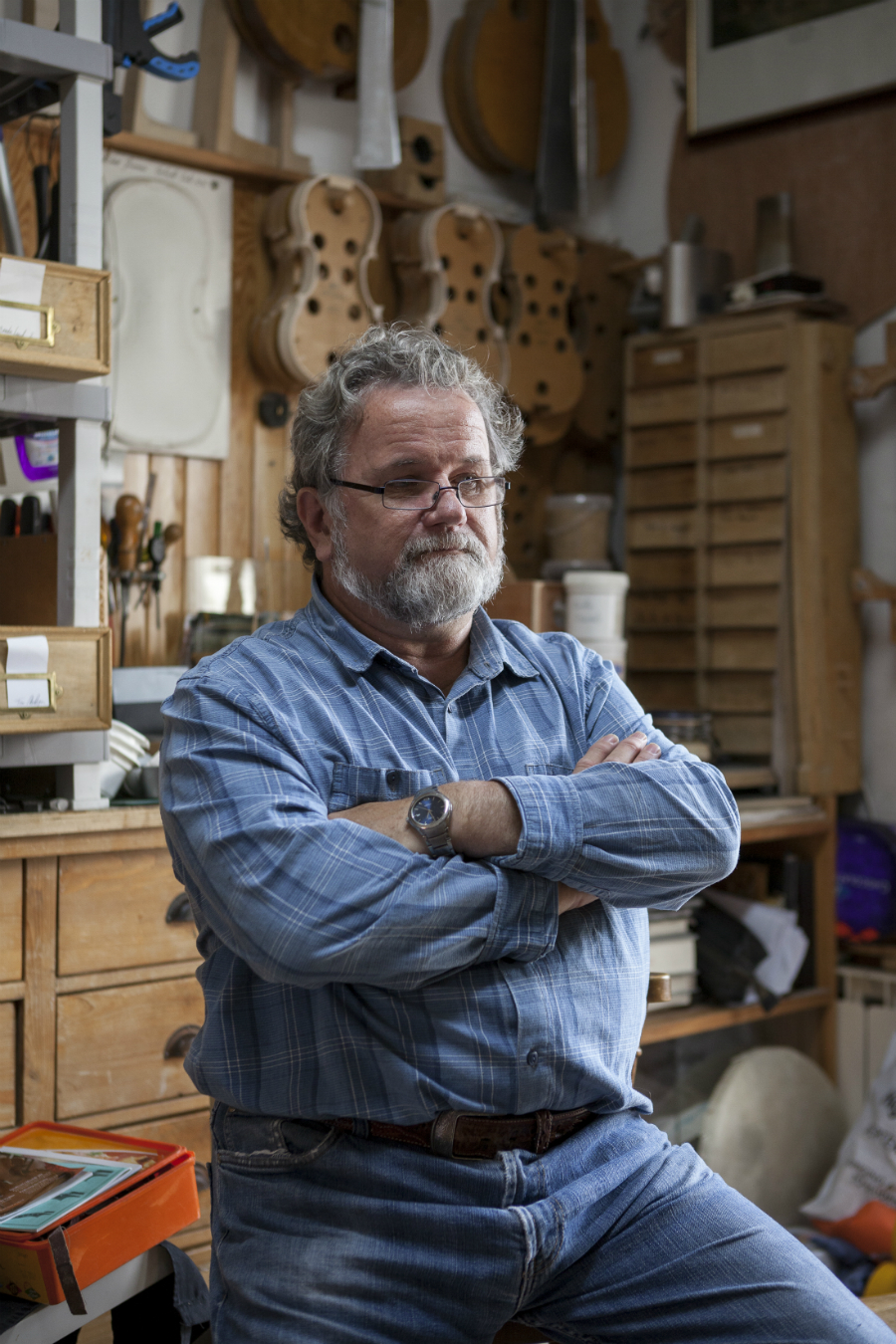 “The thing about violin-making is that there’s no such thing as an apprentice. Any luthier in Ireland, in the past, has become one by their own initiative. It takes a lot of time to build up the skills to make a really good violin. If you were to take on somebody from scratch, it could be years before anybody could earn their keep. If there’s a job going in this trade, the person who’s earned a diploma in a violin-making school will get the job.

“There’s always enough people interested in this particular craft, coming from all sources, all countries. There’s enough to fill the schools, and to pour out 30 or 40 new luthiers from each school every year. It’s enough to sustain the demand from the shops employing them. People who really want to do this are keeping the craft going.

“But on a bigger scale, especially in Ireland after the crash, I think we’ve lost generations of young people to the Internet, they aren’t going into apprenticeships. They all want this instant gratification, instant fame.. the amount of young lads who left school, who would never have the ability or the desire to go to third-level education, who years ago would have jumped at the chance of being carpenters, plasterers, electricians. There haven’t been proper apprenticeships for a long time now.

“Becoming a luthier was a natural progression: I have certain skills that brought me to violin-making. My passion is playing music as well – that was always my first love. I had a long-time friend who was making instruments, and I thought it was fantastic – I thought it was a dream job. I never thought that it could be my dream job. This is a continual learning process – you never stop. That’s what’s great about it.”