In the note enclosed with handiwork Sara Baume describes her artistic practice as “the construction of small objects.”This, her first book of non-fiction, describes the daily work of making a flock of birds from carved and painted plaster in the wake of her father’s death. It shows how art grows out of domesticity: how it is quietly grounded in Baume’s house, in the routines of cleaning, cooking, washing. Balanced alongside this are reflections on the lives of birds: as instinctive to them as they are magical to us. “It seems to me, increasingly, that it might be possible to make up poetic facts about bird migrations… that would later turn out to be true.” 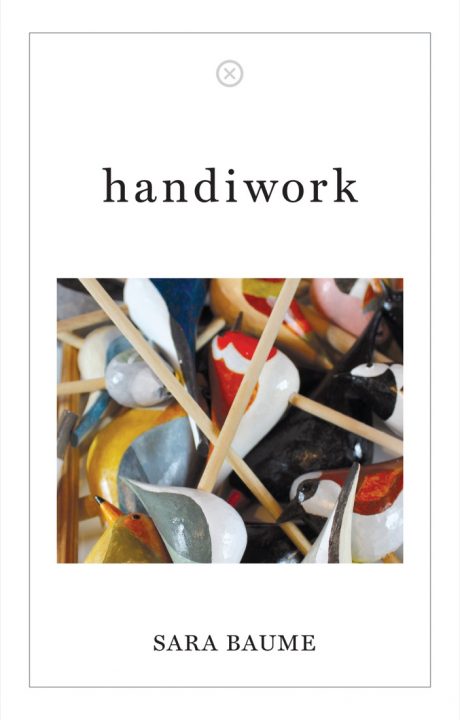 The effect of recording alongside one another, in snippets of prose that are by turns sparse and abundant, the processes of grief, daily work, migration, watching birds, and making birds, is that they come to seem as necessary as each other. Everything becomes connected, becomes both strange and natural. (It is telling that the language Baume repeatedly turns to when the art goes wrong is of “contamination”.) Eventually she stumbles across a juvenile northern wheatear and the two lock eyes. A warden later tells her that “most likely I was the first human she had ever seen”. That surprise of connection – of “poetic coincidences” – is the logic that governs this book.