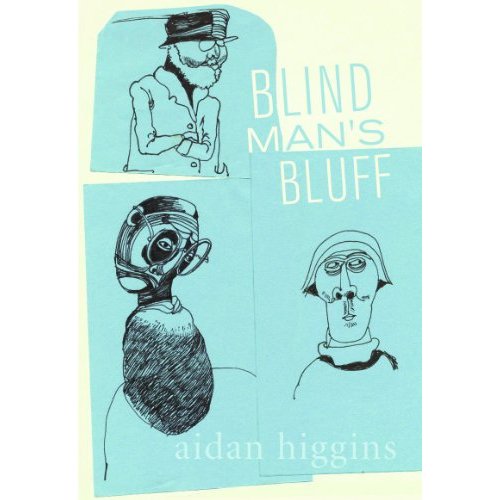 Blind Man’s Bluff measures no more than 60 pages, many of which are filled with old photographs, collages and scribbled portraits. You could be forgiven for thinking this to be little more than the publisher’s gesture of appreciation to Ireland’s most unjustly under-read writer as he reaches 85th year. But you would be quite wrong.

The book opens with a black-and-white photograph that shows the blur of a woman walking away from Podbielskiallee station in Southwest Berlin, an area where Higgins once attempt suicide. Above the station door, the horseshoe motif of the letter ‘U’ (for U-Bahn) echoes the two hung up on a nearby signpost. This is a succinct and rather beautiful visual prologue that works to introduce almost every major theme in the book – ghosts, the loss of vision, the return to infancy, suicide.

Divided into twenty vignettes of varying length and despair, the book starts with episodes from the author’s childhood. His beginnings as a writer are chronicled as his mother teaches him to write the word ‘cat’. “One day a miracle occurred. Animate and inanimate merged.” Soon he contracts measles, which he duly passes on to his younger brother (“dead before me like my two elder brothers”). As a curative, Higgins is sent away to his room for six-weeks, where he occupies himself with the works of Hans Christian Andersen. Right from the off, therefore, the conflict is squarely framed: books or death. Later, he walks past “the death quarry” where Old Jem Brady, his neighbour, had just committed suicide. “A bluish gas hovered over the last resting place of the good farmer, much mourned and long remembered. Thus ended childhood.”

It might be expected that the book would then bring us from childhood to adolescence. But Higgins, who these days has trouble differentiating between a wheelie-bin and a woman, remarks that for the semi-sighted “there is no continuity, here all is topsy-turvy.” And so the book ignores adolescence, skipping forward to the author’s old age, where Higgins takes on a style of narration that is, if anything, more childlike. An entire chapter is devoted to a rather crude retort he once made while arguing with a ‘fat-faced Corkonian’ in a Chinese restaurant. It is a boastful account, one that sits very strangely alongside the weightier passages before it and one whose reason for inclusion only later becomes clear. “Blindness is a state of helplessness,” explains Higgins, “of being an infant again.”

The book soon follows suit, taking the promised U-turn all the way back to the author’s childhood. In a passage that echoes the book’s opening vignette, Higgins is once again in his pram – “this most funereal-looking thing” – admiring “the marvels of an unknown world that is ours”. Though Blind Man’s Bluff sometimes has the feel of a posthumous collection, this image is about as close as we get to the author’s feelings on his own death. It is, despite everything, a book so full of life.