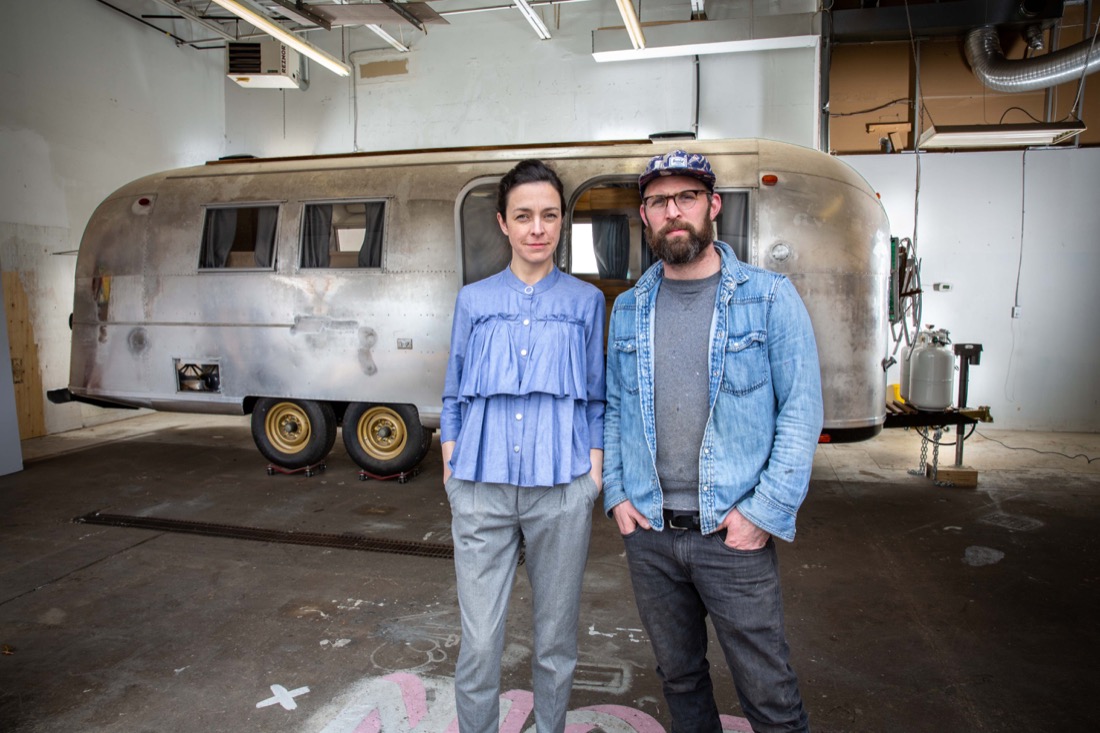 Specializing in custom made furniture, interiors and homeware, Borien studio are a husband and wife team of creative craftspeople. One half of the duo Robin Grundy tell us how they do what they do so well.

How did you and Eoin come to meet and then come to work together?

We met in Dublin at IADT in the model making and film design course. Our skills have always complimented each other so it was a natural progression after college to start working together.

Can you describe a little about your individual paths before joining forces?

After college I worked in fashion styling and design for the Selfridges group in Toronto initially. I was interested in the art and installation side of windows and interior display. Eoin worked between film, fabricating and collaborating with artists. While we were in Canada, he worked with artists such as Kent Monkman, Douglas Coupland and Dan Bergeron. 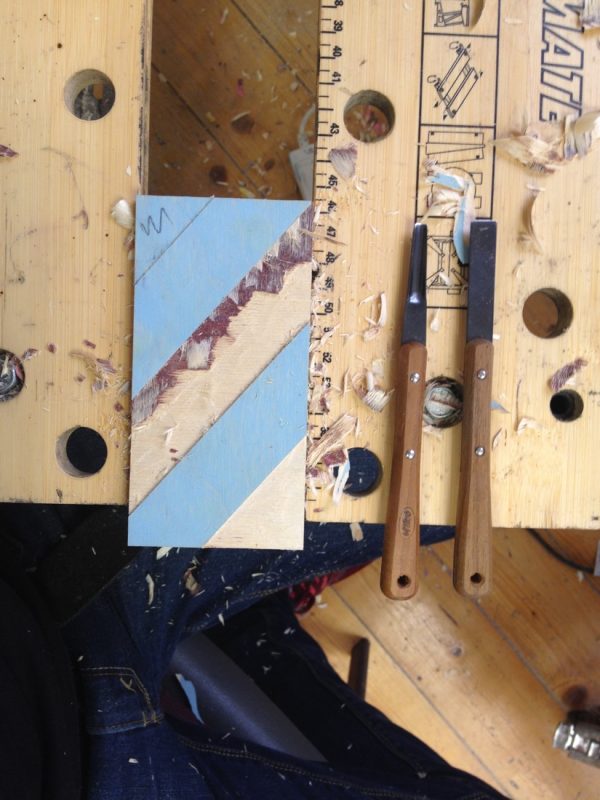 He worked and travelled with Maser for 15 years as well. When I began designing fashion directives on a corporate level, Eoin came on board with the build and logistics on each project. That led to us teaming up and working on our own for the likes of Hermes and Canada Goose.

You’re artists, furniture makers, retail specialists and much more. Why do you think it’s important to be multidisciplinary over specialising on one aspect or craft?

In a freelance world, you have to be adaptable. Each job leads to the next and we both like a challenge, so this makes our work diverse.

What was the catalyst for starting Borien?

When we moved back to Ireland in June 2018 we rebranded. Borien is a blend of our names which legitimizes our partnership. We wanted to focus our business on the natural path it was taking into furniture and interiors. We have since designed our own brand of table legs which we are rolling out this year, as well as our bespoke pieces.

A Canadian and a Dubliner living in County Wexford. What drove the decision to move to Ballygarrett? How’s it working out?

We weighed up our options coming back. We needed a workshop onsite so we could be here for our kids and we always wanted to experience rural living after being in downtown Toronto for ten years. This seemed like our chance to try it. 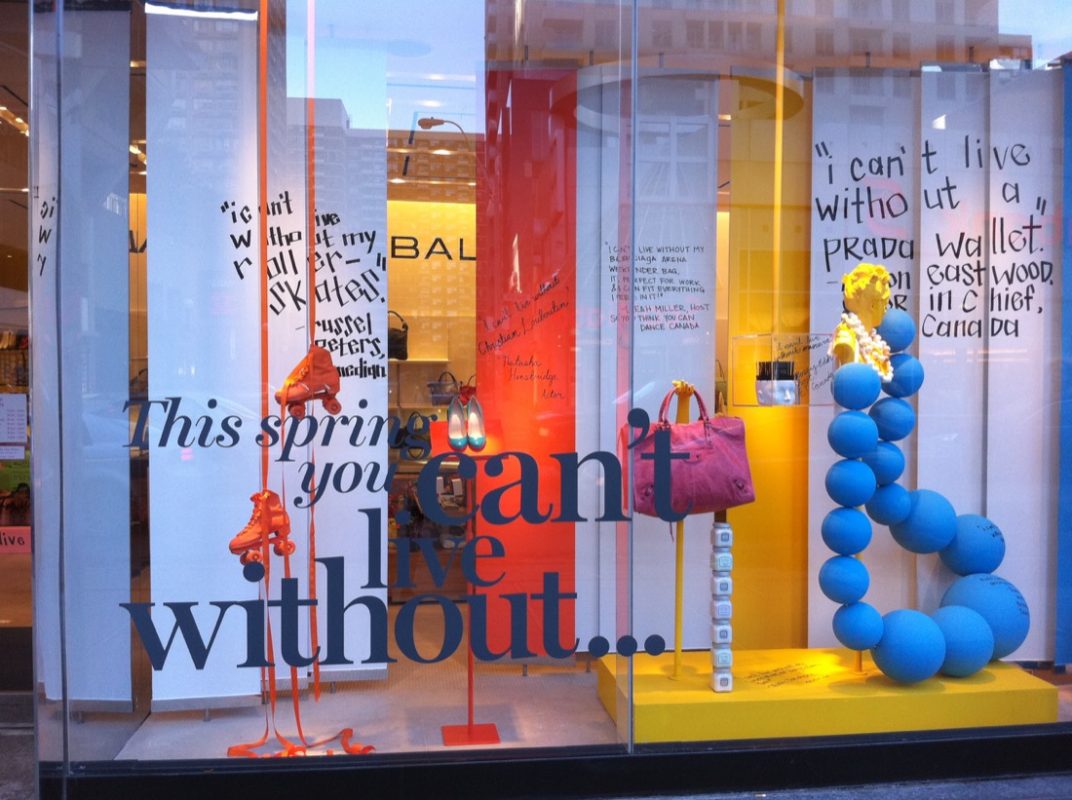 This, plus the housing crisis, made it a quick decision. Ballygarrett has beautiful beaches and an idyllic space for the kids to run free while still being commutable for work in Dublin.

What’s your process when approaching a project?

For me, excitement, mood boarding and brainstorming with the client comes first. We need to get to know the client, their space and their wants from the project. I then sketch some ideas, Eoin tells me to make less things float on the wall, then I revise and we get started! 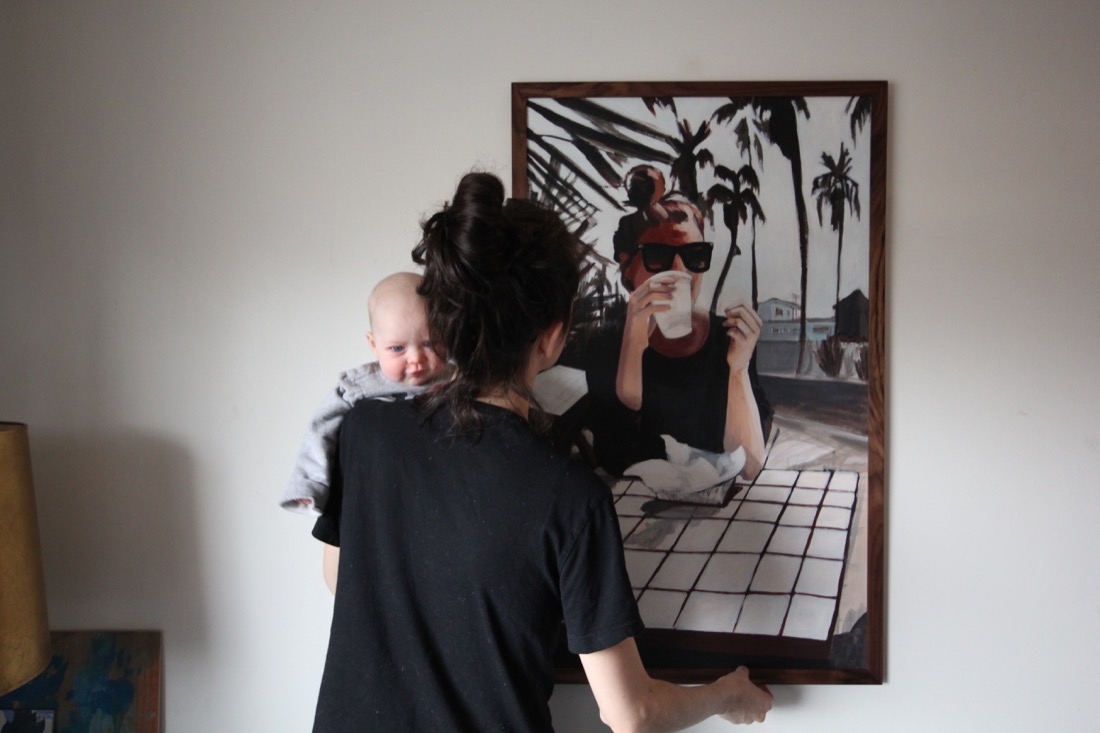 The beginning is my favourite. The excitement of possibilities and searching for beautiful materials is very enjoyable.

Your favourite projects so far and why?

Probably the Shaw Street Project in Toronto in 2016. That really was the catalyst that focused us on furniture design and interiors. The client wanted bespoke pieces for each room in the house to tie it all together. It’s featured on our website. The project combined all the multi-disciplinary skills we had acquired the previous 15 years into a beautiful and thoughtfully curated project. Plus, it was permanent. Everything in film and display is disposable. Once the clients saw we were capable of at Shaw Street, the requests for beautiful pieces poured in.

An epic project you took on was the refurbishment of an Airstream. This was not just bringing it back to its former glory but literally labouring over every element to make the ultimate place on wheels. Can you talk us through how this came to be and how the project went, from your perspective?

We met the client while doing a large outdoor installation in Fayetteville Arkansas with Maser. The client mentioned he had an Airstream on his land and asked us to work on it about five times over as many years and we turned it down. After he saw the Shaw Street pieces, he basically said, tell me where and when you want it and I’ll send it to you. It arrived in Toronto in March 2017. 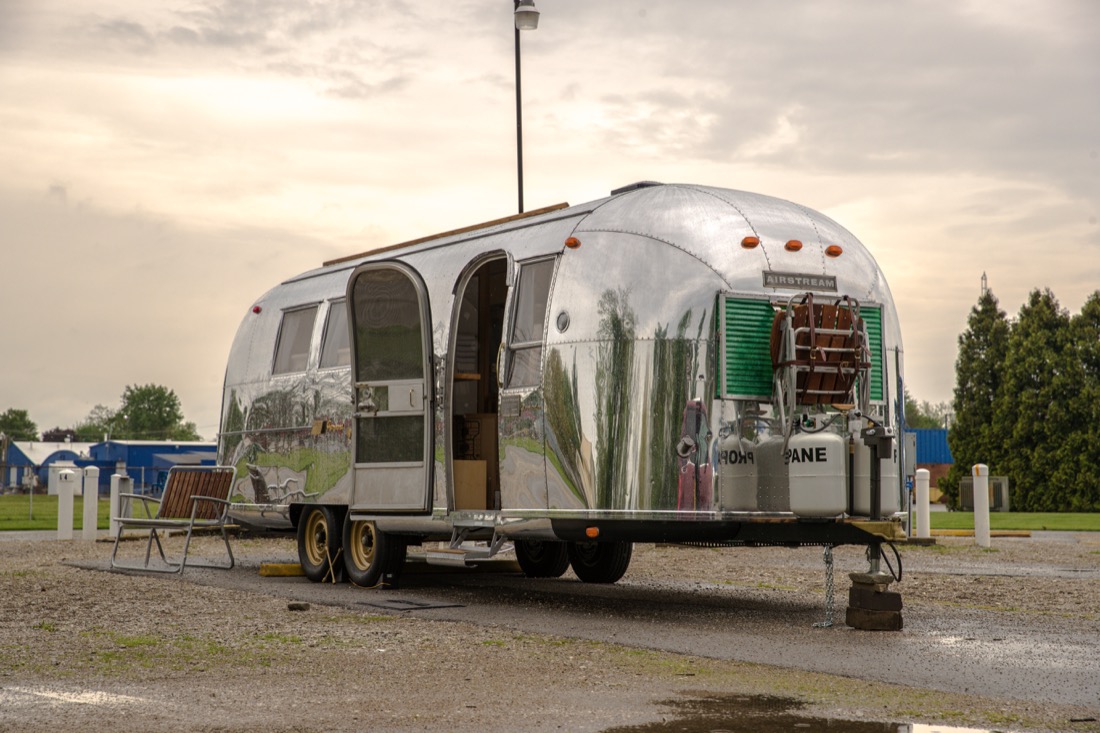 It was an amazing offer to be given carte blanche on a project like this. Obviously, the cult of the Airstream and Eoin’s love for vintage car culture, plus the mid-century timeframe, made it impossible for us to refuse. We learned a lot. The project was enormous and all-consuming. Taking on these vintage projects is no small feat. Constant unknowns and unattainable parts. But, like I said before, we love a challenge.

We are a silent disco studio. Eoin prefers crime podcasts and English Grime. I’m usually painting in the workshop so I like more chill old man folk, Roxy Music if I need a pick-up and ‘You Must Remember This’, a podcast about old Hollywood scandals. I’m a nana.

Your reading list. What are the books you intend to devour in this coming year?

Mostly we read kids books and fall asleep. I got an Almanac in my stocking so I’m psyched about that.

You’ve done fit outs for some of the best hostelries in the city including working with Colin Harmon across his 3FE empire and also John Mahon on Lucky’s and The Circular. What have you learned along the way with these projects? What have been the biggest successes and challenges?

With Colin, he has such a knowledge of what works and what doesn’t for him and his clients. That’s been a great education. I know what works in retail, but that advantage of knowing what restaurant customers require has been really beneficial. 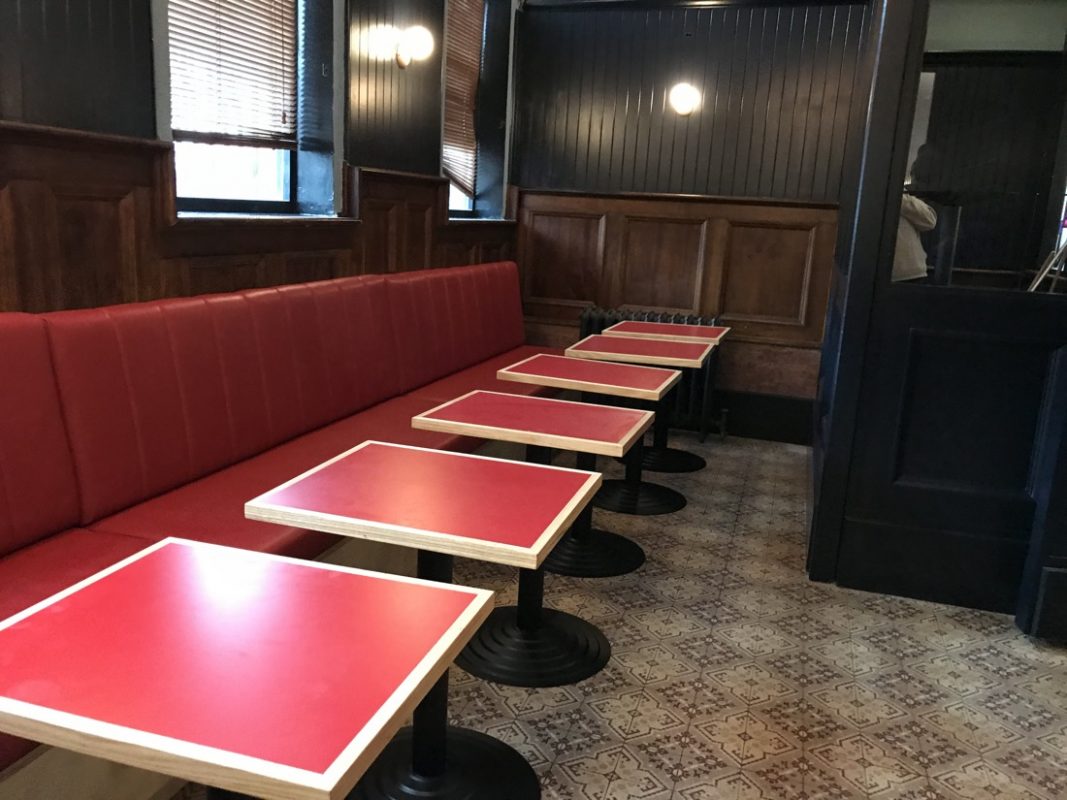 With both John and Colin, they trust you to do your job. They are both open and ambitious with their design choices which makes it fun for us. The most successful project with those guys has been redesigning the 3fe Daniel location.

Three rules you live by and would give to others setting out on a similar path to yourselves.

Oh God. Be confident in your ability. Go with your gut – and that includes people you’re working with and for. It’s so important to work with good people and cultivate those relationships. Measure twice and then measure again.

Rumours abound that you’re considering a return to the city in the not so distant future. Why move back, is it professional or family or something else that is informing your decision? 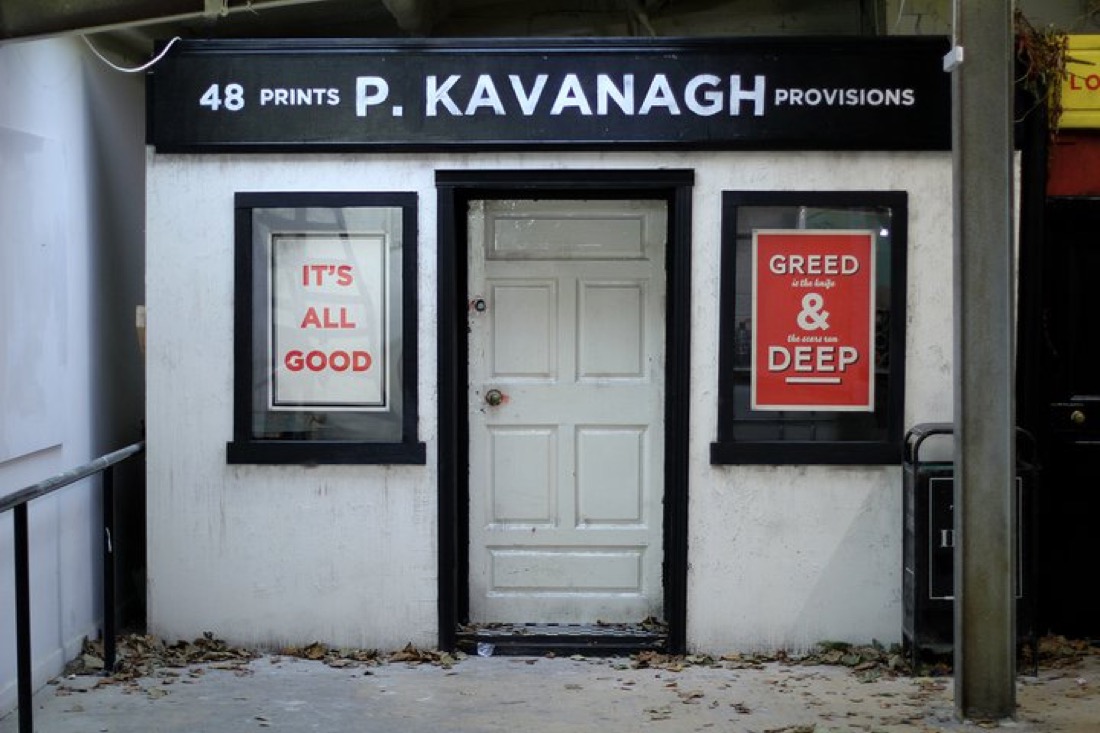 We’ve had some time to see where the work is coming from, and that’s Dublin. I’m a city girl at heart and I miss the buzz of a good neighbourhood. We haven’t ruled out country life, but it would be nice to be closer. I’m always on the lookout for the dream location and project for our family.