Ultimology: How to Make Sloke 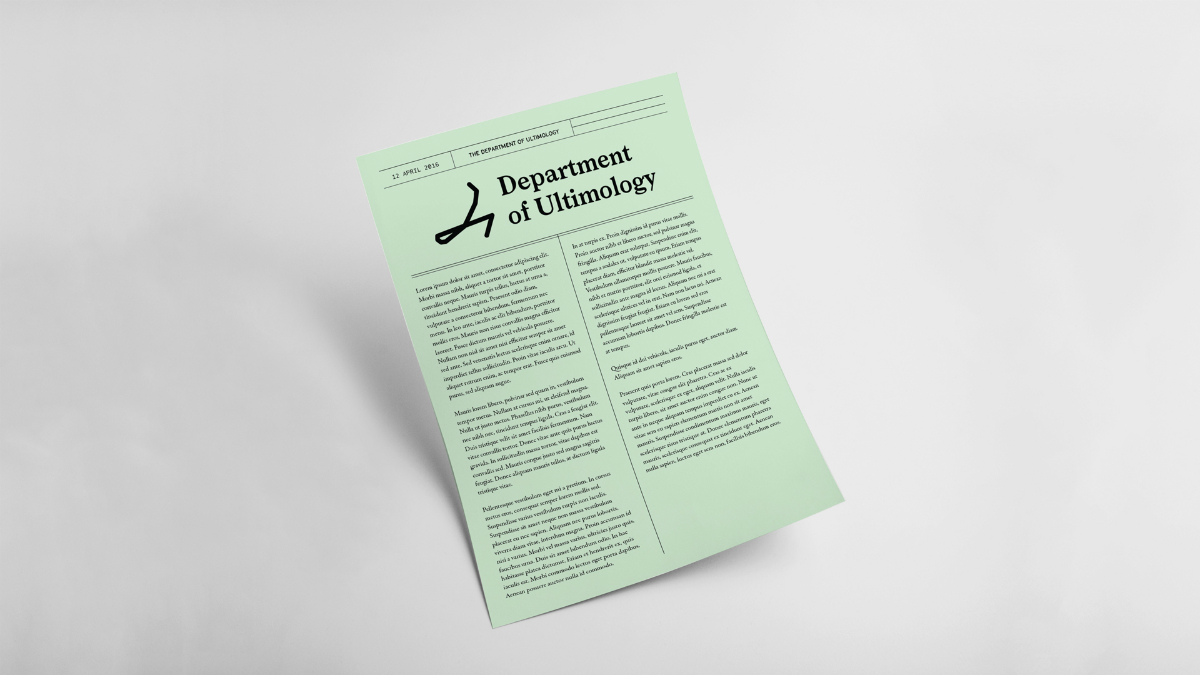 This is the type of unusual question you find yourself asking when speaking to Kate Strain and Fiona Hallinan, a curator and artist respectively, whose work collectively spans food and hospitality, site-specific events, and performativity in visual arts practice.

Fiona regularly installs herself in locations and institutions and creates experiences that connect to the environment or its history; The Hare was a food project in Temple Bar Gallery & Studios that marked the centenary of the 1913 Dublin lockout, the project’s title echoing the name of a ship laden with food sent by British trade unionists to support the Irish strikers during the bitter industrial dispute; Heterodyneis an ongoing site-specific audio project that offers soundtracks via mobile phone app for routes in Ireland and elsewhere (like the Military Road in the Wicklow mountains).

Kate is the new artistic director of the Grazer Kunstverein, a gallery in Graz, Austria, where her ‘Seasons’ programme for 2017 is guided by the leitmotif ‘The Necessity of Art’. This phrase is taken from Ernst Fischer’s 1959 book The Necessity of Art – A Marxist Approach, which states: “Art is necessary in order that man should be able to recognise and change the world. But art is also necessary by virtue of the magic inherent in it.” Among other things, one of Kate’s ongoing projects is The Centre for Dying On Stage, a research project that includes an evolving catalogue of instances of death during public performance.

Sloke is a type of seaweed commonly found in Ireland, and elsewhere.

In 2014, while on a residency in a caravan park in Portrane, Fiona and Kate conceived ‘How to Make Sloke’ (commissioned by Fingal County Council Arts Office and developed through Resort Revelations). Part talk, part cookery demo, part comedic performance, the event detailed the recipe and method for concocting a type of seaweed pudding/bread that had at one time been popular in the region. Through interviewing locals, they’d come across this traditional foodstuff, a readily available source of nutrition, once widely consumed and now an outdated curiosity.

Sloke. It’s a word heavy with whimsy, with the savour of a Lewis Carroll poem. Whimsy is something that seems to characterise the collaborative work of Kate and Fiona in general, work that has serious intent but is undertaken with ambling and open curiosity. It was during the residency in the caravan in Portrane that the pair also conceived their latest project, the Department of Ultimology. Embedded in Trinity College and hosted by CONNECT, the Science Foundation Ireland Research Centre for Future Networks Communications, the Department of Ultimology studies ‘what is dead or dying in a process’. Fiona and Kate refer to ‘ultimological’ objects or forms of knowledge, meaning those that have fallen out of currency, some to the point of extinction. Like sloke.

Both students of art history in Trinity College circa ten years ago, Kate and Fiona lamented the loss of the slide library, an archive of imagery that was their source of visual reference for artworks. This was before the widespread use of Google. They speak of the very physical experience of using the slides – removing them from their cases, inserting them into the clunking lightbox – and the particularity of each image, some of which were holiday snaps contributed by professors, featuring their spouses or kids or cars. What started as nostalgia for an idiosyncratic system of information-gathering eventually led to a more general realisation about how outside forces influence knowledge creation and curation.

Fiona: “We thought, if there’s such a massive difference between our experience of studying art history, which isn’t a particularly technological subject, and how it’s studied today, what must it be like in engineering or science – these disciplines must be completely different now because of the ways we access knowledge. And I think we also had a creeping feeling that education and knowledge processes themselves were changing largely because of pressure on universities to seek out funding from external sources. If Google, for example, are happy to fund eight PhDs in computational linguistics, that means that subject grows as an area, and the production of knowledge in that area is more than the production of knowledge in, say, medieval history. We also felt that academies are perceived as objective sources of knowledge and objective producers of knowledge, but in fact they’re affected by these external sources in the same way that business is.”

Near the outset of their ultimological quest through Trinity College, Fiona and Kate met a man called John Kelly. He is the chemistry department’s resident glassblower, tasked with conjuring up pieces of glassware for experiments. Due to retire in two years when Kate and Fiona met him in 2016, John’s role will not be filled after his departure. 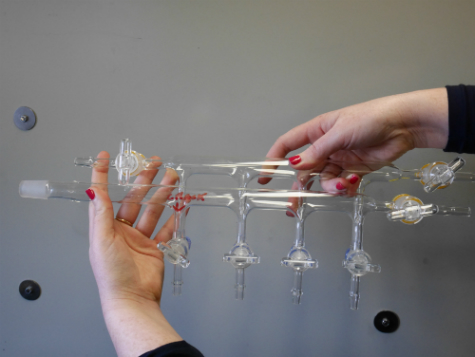 Fiona: “When universities look to cut costs, salaries are one of the first things. So now the students of chemistry, rather than being able to have a bespoke piece of glass made for them and their research, will have to outsource their glassware from a general manufacturer. And that might mean that if they were looking to do an experiment that required an unusual piece of glassware, it could be much more expensive to have it made externally, and that might lead people to choose to do experiments of one kind over another… People are so focused on the idea of innovation in universities, but sometimes that innovation needs to be supported by a base framework of the things that are seemingly expendable.”

The Department of Ultimology is an entity that can infiltrate (‘art by stealth’, as Kate terms it) the institution of the university and start to investigate these fluxes of knowledge and the winds that blow them, through an artistic practice. The term ‘ultimology’ already exists in some religious contexts to refer to ‘the ultimate’ or ‘the sublime’, but Fiona and Kate came to it through Ross Perlin, assistant director of the Endangered Language Alliance in New York. Ross was using the term to refer to languages that had fallen out of use; for Kate and Fiona, the formality of the word as well as its connotations of endings lent itself perfectly to the performance of academia they were imagining. What began as an interest in becoming an archive for ‘ultimological’ objects soon turned into a quest to become officially recognised as a real department in Trinity, engaged in their own form of knowledge acquisition with their own ultimological methodologies.

Fiona: “We started to collect this set of qualifying features to become a department, so we discovered we needed to have a student, a budget, an office… and as we collected these things, we realised we were actually becoming a department through calling ourselves a department.”

Kate: “And it was this kind of performative gesture that we became much more interested in than, say, the production of outcome-driven projects or even objects. And so, rather than become a repository for things that are dying or failing, instead we see ourselves as a living process that enables conversation about things that are dying or failing or being washed out of the system. So it’s much less about the production of objects and much more a performative process.”

Ultimology is a push back against a slide into an uncritical approach to knowledge generation. The Department will host ultimology clinics throughout the year, where researchers from the university can go and discuss what is becoming ultimological in their field. It’s a space for critical reflection on the conditions of research, in an environment that increasingly offers little space for such reflection – what Kate describes as “little pockets of extreme laziness… ultimology is something that can give us the space for thinking otherwise”. Apart from the clinics, there will also be a programme of events open to the general public throughout 2017. 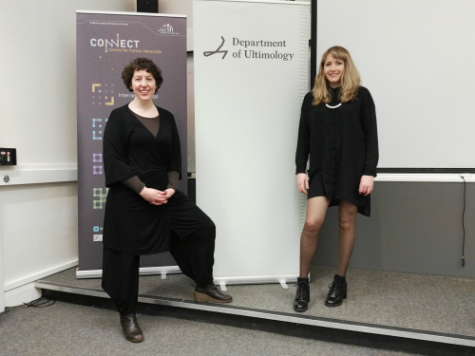 The ambitions for the project are, admirably, not modest – apart from having a presence in Trinity for the next hundred years, the duo would like to see a Department of Ultimology “in every timezone – one for each hour”. They’re already expanding their network by speaking to organisations like The Long Now Foundation, a group that wants to build a 10,000 year clock. The hope for the Clock of the Long Now is to help harried individuals and institutions, beset by a million concerns that fragment their attentions and energies, manage to visualise ‘deep time’, thereby reconnecting humanity to the idea of ‘the future’ and breaking the cycle of frantic doing on the timescale of online media that is the unique affliction of our current age.

If executed, the clock would be extremely costly (in the millions) and might not even last the proposed 10,000 years. In light of this, it might seem a wilfully frivolous undertaking when the cash and effort could be invested in, say, a practical environmental cause. But the value of the Clock of the Long Now (even the concept of it) is this push towards ‘thinking otherwise’ that is necessary before big, and seemingly insoluble, problems can be tackled collectively. Notwithstanding the humour and whimsy that’s a mark of their work, Kate and Fiona are clear on where the Department of Ultimology is going and why. As Kate says gravely when asked about how applicable the project is to other universities: “I don’t think it’s only applicable – I think it’s necessary.”

For more information and updates on public events throughout 2017, visit: www.departmentofultimology.com

Glassware: A Manifold: Glassware by John Kelly, Department of Ultimology, 2016