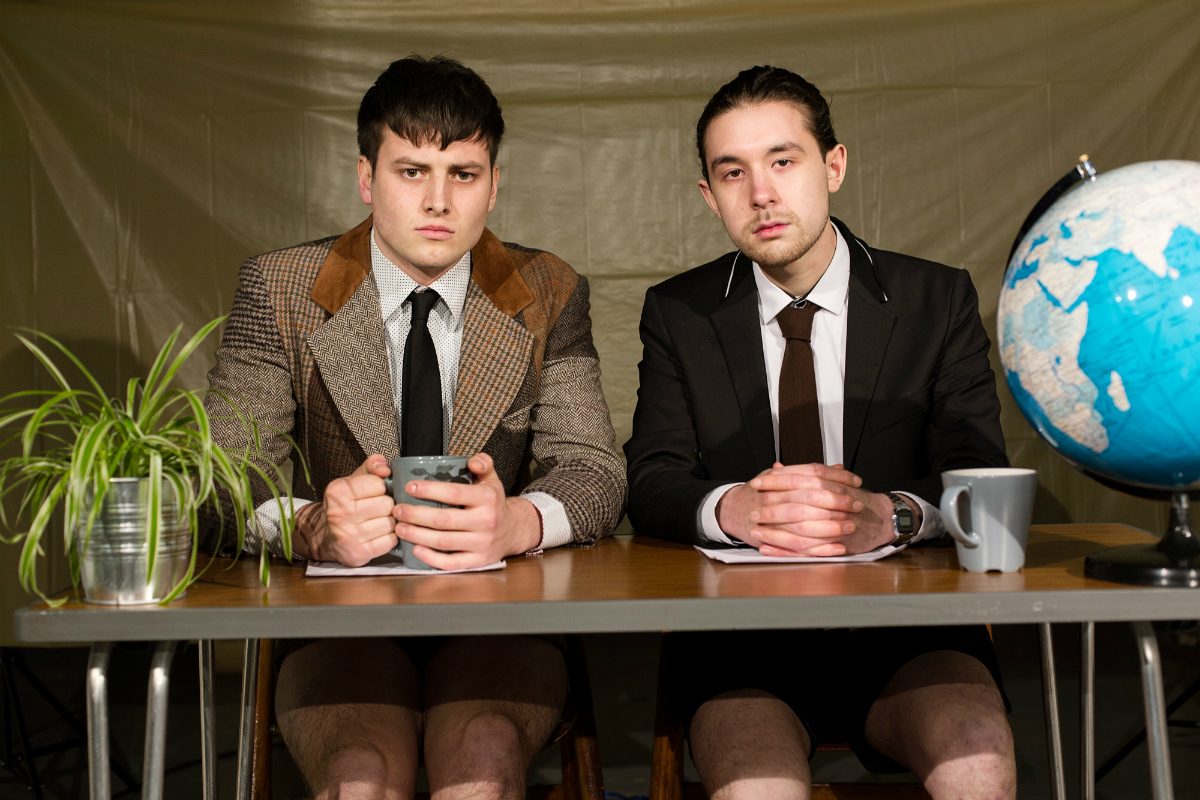 Ellius Grace and George Voronov are the duo behind Junior, a magazine which casts a spotlight on emerging Irish photography. They are releasing their second edition under the theme of ‘Freedom’ this month.

Can you tell me a little about your respective backgrounds and how you ended up in the photography field?

EG: I came to photography about eight years ago. I’ve always been a visual person and as I searched around for the right medium, I came to photography. It was something that really spoke to me when I first picked it up, even though I wasn’t very good. I had a cheap DSLR handed down from my father and the internet made learning easy.

Studying graphic design at The National College of Art and Design really elevated the way I shot. I was surrounded by so many creative people, who became my subjects and influences for those four years. I started taking small jobs here and there during college and that has now built to what I’m doing now.

GV: I kind of got photography thrust onto me in a very peculiar way. I won a competition when I was fifteen and got selected to go on a month-long scientific expedition to the Arctic. I had never even really used a camera before the trip but within a few days I was filling up an SD card every couple of days.

Then when I got into college I was blessed with a group of friends that were both extremely proactive and not at all camera shy. Chronicling our weekly adventures was the best type of training I could have hoped for. It really allowed me the freedom to develop technically as well as to start thinking about photography in deeper and more critical ways.

Where did the idea for Junior come from?

GV: I had just graduated college a few months previously and was holding down a crappy retail job. After a while I realised that I was just eating through months and months and making absolutely no progress with my photography, artistically or otherwise.

Since being in college I had always wanted to produce a photography magazine and use it as a way of fostering a community of young photographers (for my own benefit as much as anything else). Then, around the New Year of 2016 two things happened. First, I had made my girlfriend a small zine as a Christmas present and getting hands-on with the printing and craft element of photography got me super stoked. It was like discovering an entire new dimension to this thing that you’ve been doing for years. As I was putting that together, I bumped into Ellius at a party and he took me up on my months-old offer that we should get together and talk photo-stuff. It kind of ended up being a question of perfect timing.

We met up for a coffee, the project started out as a zine. We wanted to keep things pretty lo-fi. I think we both still have our notes from that day. The more we worked on it, the more ambitious we got. Before long we were in a place of wanting to make a really nice printed object and really do justice to the work that we saw being made by so many Irish people our age.

Since then we have decided to not only function as a magazine but also as a publishing imprint of sorts. As much as we enjoy putting out a “proper” magazine in Junior we also want to be able to mess around and experiment without being constrained by the formal restrictions of a magazine as well as the pressure that comes with trying to make something ‘serious’. Branching out allows us to be more casual and push the boat out in terms of different ways of presenting printed work.

Junior is particularly interested in representing emerging Irish photographers – what are your guiding principles for selection?

GV: Honestly, for the most part, it’s a question of what gets us stoked. We do our research. We try to keep up with who’s around, who’s making work, who’s graduated. We stalk people’s Instagrams. People are always more than welcome to get in touch, too. We love finding exciting new work.

With Junior we want to show a diverse range of photography. Thematically but also aesthetically. I’m really excited for this issue to come out, I think it’ll really show a wide range of what’s possible with the medium. 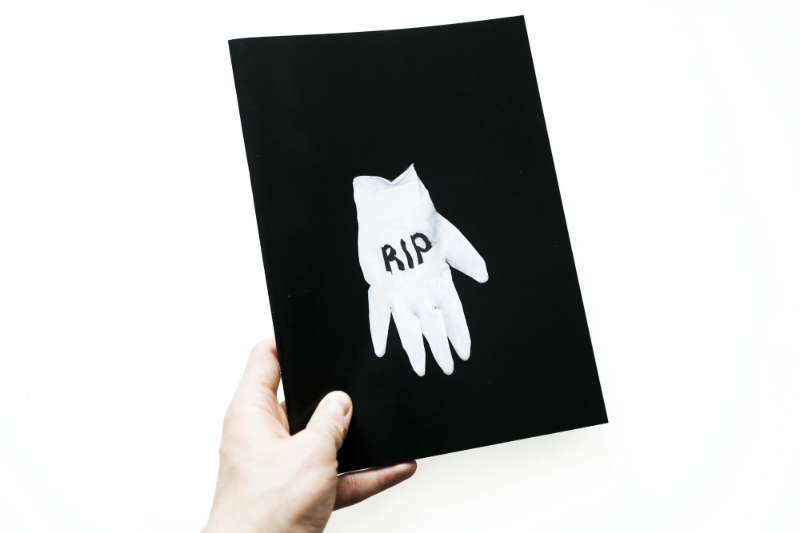 One of the things that we did kind of solidify while working on this issue is wanting to work with photographers who are actively trying to get their work out there. We’ve come across a few projects online that we actually really liked but found out that whoever made them had moved away from photography. We felt that even though we loved the work, it made more sense to keep looking and make sure that the pages were being dedicated to someone who was actively trying to pursue a future in the field.

What other themes would you like to explore or does this come about from the selection of work submitted?

EG: At its core, Junior is about human stories told through photography. When we are looking through submissions and potential features, we look for work that feels personal and engaged. The theme of the first issue was Youth, which came about serendipitously. We hadn’t thought about having a theme for the magazine, but when we looked at all the projects we had chosen to feature, we realised there was a strong connection between all of them, which was the idea of youth.

For this issue we’re going with the theme of Freedom. We came up with it while we were curating work for the issue, and it feels fitting for the times we are living in today. For future themes I guess we’ll let the work and the current zeitgeist lead us. The themes of the magazine are a way to loosely tie everything together.

How do you fund the publication and zines?

EG: So far, we fund the whole thing ourselves, along with the generous help of our Kickstarter backers. For issue 1 we just about made our funding goal but still had to put in a good amount of money each to cover all the extra costs, not to mention all the coffees we had to buy along the way. When we released RIP we just paid out of our own pockets and then prayed we would make it all back.

We’re now back on Kickstarter taking pre-orders for issue 2 to help fund production of the magazine along with a week-long exhibition in The Library Project. We will be featuring a lot more work than we can fit inside the issue as well as hosting a number of events which we will be announcing soon.

Junior really is a labour of love. We don’t expect a huge monetary return any time soon, and honestly we couldn’t care less. We both get so much out of showcasing work that we believe in.

Where are you both in your respective practices at the moment? Future plans?

EG: I have just moved to London about two months ago, after spending a year at home in Dublin working on my portfolio and travelling to make editorial and fashion work. I’m currently working on a number of commissioned and personal works. I’m really lucky to be able to balance fashion, editorial portraiture and project work as I work freelance here in London. Dublin will always be my home but I think it’s necessary to go away for a while and try a new city. Junior keeps me grounded to my roots and I can’t wait to come back for ten days to set up our exhibition and launch Junior Issue 2 in May!

GV: I’m a stage where I’m just starting to get my act together professionally. I’m doing the portfolio hustle, trying to get work when I can, assisting as much as possible, getting that experience in. I’m also trying to put together a more considered body of work  at the moment which I’ve been a bit shit at of late because I’ve kind of prioritised career development and magazine publication. I’m considering applying for the MFA program in Belfast as a way of forcing myself to just get it done. I think it’s relatively easy to come up with great ideas for photography projects but the hard part is being able to commit yourself to them long-term. I’m excited to challenge that part of myself and see if I can really see something through to the end.

Junior Magazine, The Freedom Issue launch takes place on Thursday May 25 in the Library Project at 6pm. The exhibition runs from May 22nd to 28th.