There’s Something in the Air: Iceland / Ireland 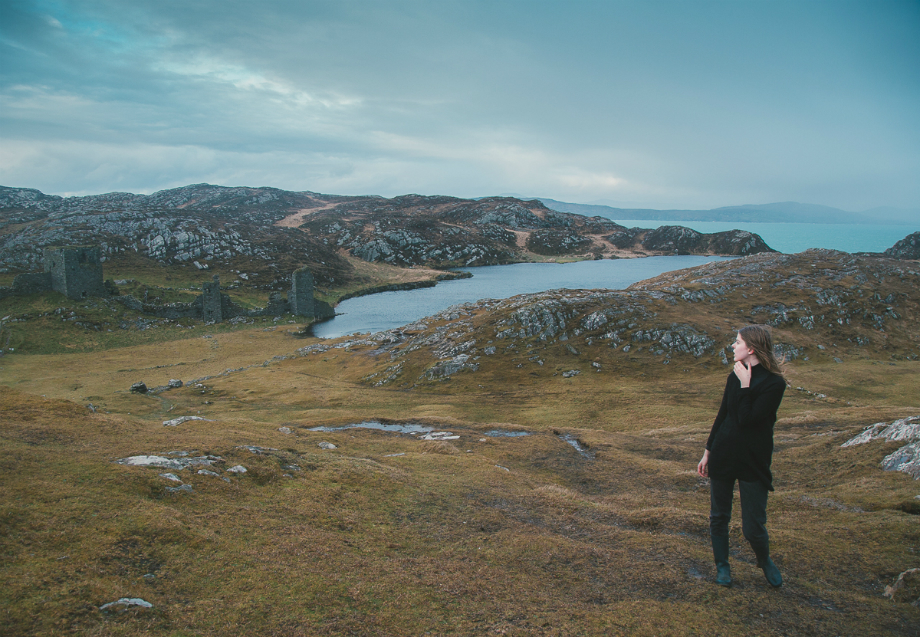 “Your show in De Barra’s had a profound effect on me,” says Sam. “It wasn’t just your music, it was like feeling Iceland. I instantly saw the parallels between Iceland and Ireland and the music, your choice of notes, your ability to convey emotion through your voice. That’s something that I’ve only ever heard Irish people do like that, it’s quite unique and that really had an effect on me.”

Sam McNicholl is talking about an intimate solo show in a pub in Clonakilty last summer by Icelandic singer and guitarist, Jófríður Ákadóttir. I was there that night also, and I was equally mesmerised as I listened to Jófríður’s quietly evocative and emotionally resounding music take the audience on a spellbinding journey from Ireland to Iceland and back again. This show was a more important moment than any of us could have imagined, a precursor for things to come.

Fast forward seven months, I am sitting comfortably in Sam’s kitchen, in his home which spirals around Connolly’s in Leap in West Cork, a much loved and renowned live music venue, that’s hosted some of the world’s most influential artists. Having initially been pioneered by his father Paddy, Connolly’s is now managed by Sam, having reopened the bar, nine years after its closure, in December of last year.

Doors on several levels of the McNicholls’ home lead into the central hub of Connolly’s, a room so full with heritage that it can’t help spilling out onto everything it touches. As Sam and Jófríður muse over the anecdotal connectors that brought them to this point, I marvel at the assuredly countless stories shared here by people through the years, all the history made in these rooms.

Jófríður first came to Ireland in 2014, invited by Colm O’Herlihy to play at Macroom’s Mountain Dew festival with Samaris, one of a few bands she performs with (Pascal Pinon and Gangly being some of the others). Colm, another “silent connector” as Sam puts it, has been part of the creative collective Feel Good Lost and is responsible for booking and organising many of Jófríður’s first shows in Ireland with Samaris, including that fateful show in De Barra’s last summer. Colm is now moving to Iceland to head up the record label and musical collective Bedroom Community, which was founded in Reykjavík a decade ago by Valgeir Sigurðsson, Nico Muhly and Ben Frost. 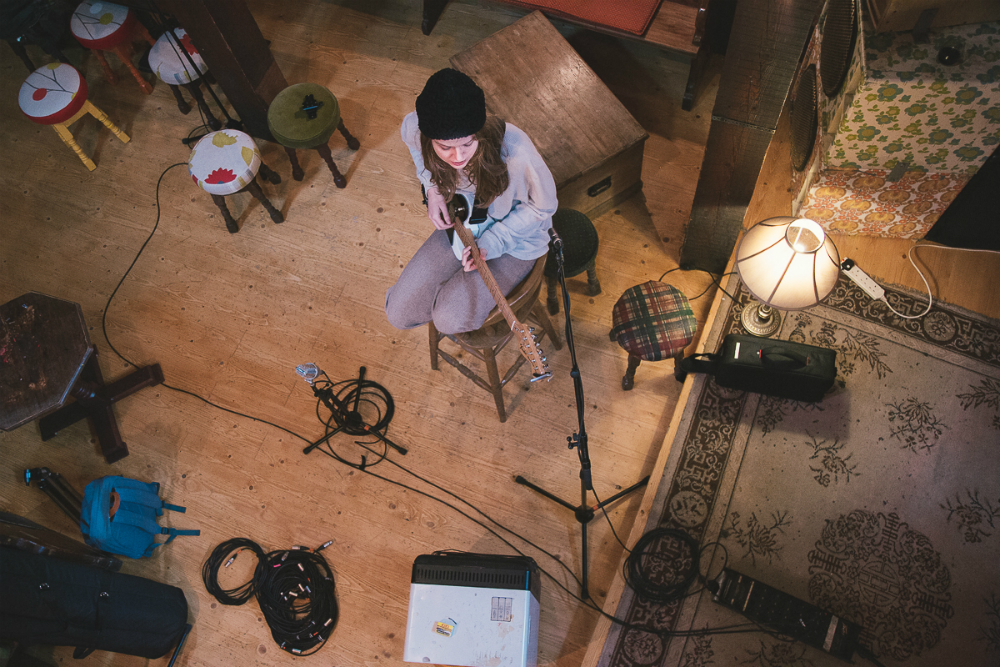 In September 2015, Jófríður was invited by Feel Good Lost to play at Sounds from a Safe Harbour, a new music festival held in Cork City put together by director Mary Hickson and curator Bryce Dessner (of The National fame), which had a pronounced focus on Icelandic music in its programme. The Ireland : Iceland Project, which was founded in 2009 by Kathy Scott, has also been a pioneering movement responsible for nurturing this cultural dialogue between the two island nations.

Heading in the other direction, Sam, who is also a drummer, was invited, along with the band Talos, to play in Iceland at the celebrated Airwaves Festival last November, where he performed seven shows, both with Talos and with Dream Wife, another Icelandic group. Sam was as taken aback by the raw and stark beauty of Iceland as I had been, when I (coincidentally) visited this geographical paradise in November, a trip which I now believe was unconsciously inspired by seeing Jófríður’s show and hearing her visceral description of the landscape there.

“I’ve never driven through a country and have it feel like counseling,” says Sam. “I had an absolutely awakening experience spiritually to the land. Your landscape reflects who you are, and your’s is elemental. I had this feeling in Iceland, [with] the lava is coming from the earth and there’s snow – fire and ice – for the first time ever I was really conscious of the fact that the land we live on all comes from the core of the earth.”

“The Icelandic landscape is so geographically new, it’s not been shaped by wind and surroundings,” says Jófríður. “Ireland is a lot more ancient in a way, so when I come here I feel a lot more connection to how ancient it is. It’s beautiful in a different way – it’s much more peaceful.”

Growing up in West Cork, where this story unfolds, Icelandic music somehow connects to me on a very deep level, the wildness of the environment and the sea. One of Jófríður’s new songs is titled ‘Old Grey’, which seems to capture this innate feeling, how the poetry of the landscape flows into the sounds in an inexplicable way. The fire and ice of Iceland somehow marries with the green fertile earth and water of Ireland in what feels like an epic love story spanning centuries from when the very first settlers in Iceland, Irish monks from the Skelligs, brought with them Celtic tradition and music to the untouched and ceaselessly regenerating landscape in the far north west of Europe. 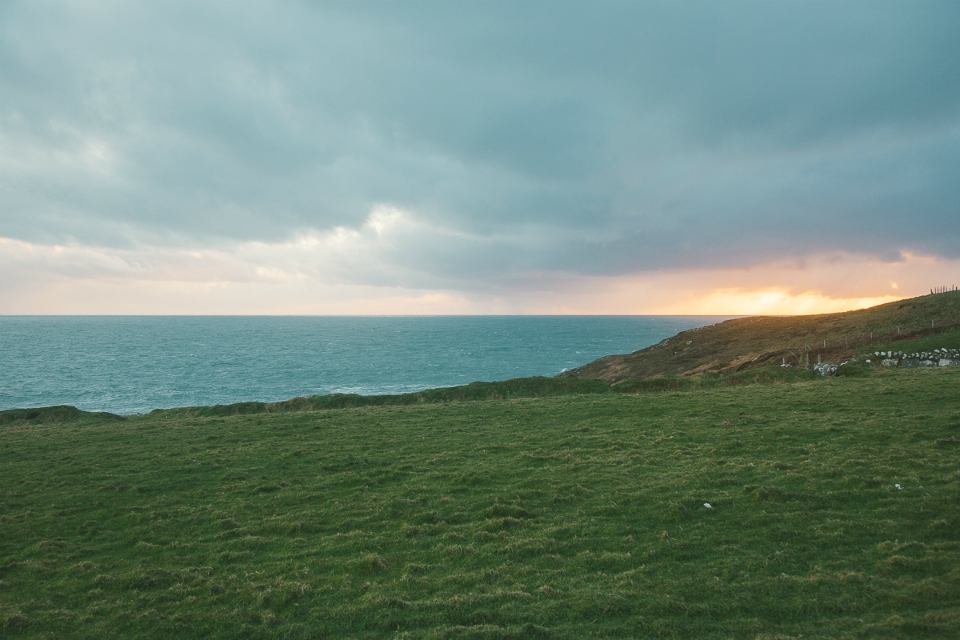 “There was an incredible composer, Linda Buckley, who performed a piece [at Sounds from a Safe Harbour] that she wrote that was built on an Irish folk song,” explains Jófríður. “I sat there and I think I cried because it was so powerful. I think she was singing in Irish, the melodies were insanely beautiful, and the story behind it, to be able to express something so deeply through music. It was a really powerful experience.”

“I remember being in Cork and walking down the main street and there were these kids playing trad music, it was amazing and I just stood there mesmerised; ‘How can they remember these melodies?’ It was just crazy.”

Perhaps this is the root of the connection, and what brings us here to Connolly’s today, an hour before Jófríður plays an intimate show in another nearby pub which oozes history and character, Levis’ in Ballydehob, alongside her friend, poet and fellow musician Ásta Fanney.

“I love coming here… the people here are amazing, the venues are small and intimate and people actually come to listen to the shows even in the smallest, weirdest town in the most obscure bar. That’s something you don’t get in a lot of places.”

The next day we head out to Three Castle Head, one of the most stunning locations in West Cork, but one that is well hidden. It is a spot which, for me, perfectly illustrates the geographical links between the two islands, on one hand stark and wild, on the other ancient and magical. The Atlantic Ocean crashes wildly against the cliff edges here and, in theory, one could sail directly from one island to the other from these richly steeped ruins. Amongst the myths of Icelandic settlement there is a tale of Norwegian Vikings once coming to Ireland and taking back with them a hoard of beautiful Irish cailíns, which became one of the largest groups of settlers on Iceland, and yet another deep-rooted link. 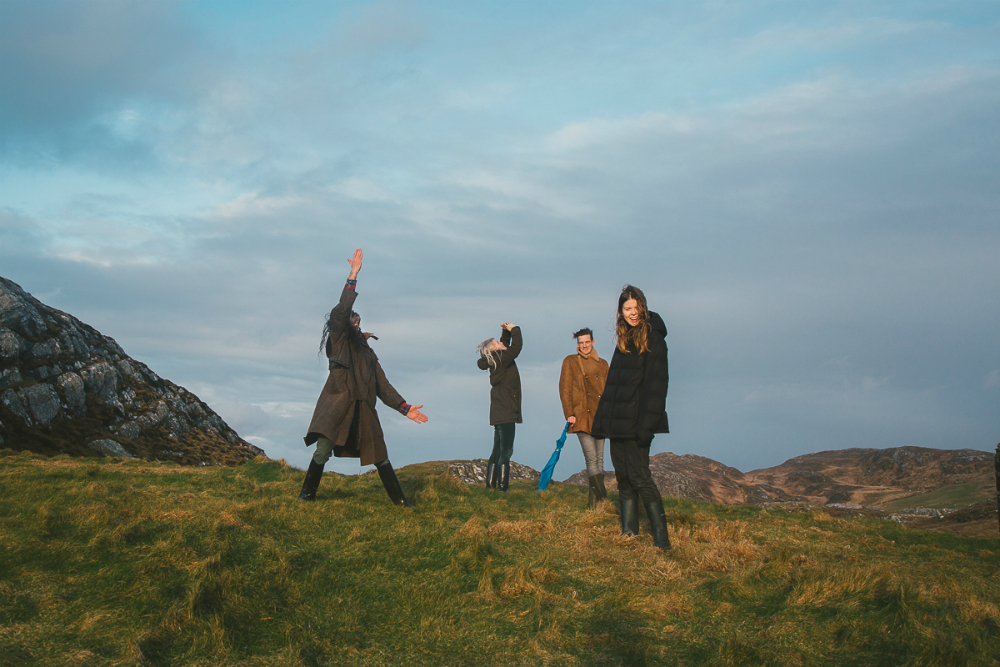 As another storm brews here, and the wind whips our hair in every direction, the sense of freedom expressed by Jófríður, and Icelanders in general, comes to mind. Sam, I feel, again hits the nail on the head, talking about Icelanders: “Whatever self-consciousness is, they’re the opposite. The way Jófr is, it’s like freedom, total freedom, and I think that’s lacking in Irish culture.”

Perhaps centuries of guilt and repression have made it more difficult for us tap into that sense of freedom, but there is a recognition of both the external wildness and the reflections our of past and present that unite the two cultures. With the continued inspiration of artists like Jófríður and the crucial existence of venues like Connolly’s, I am in no doubt that the freedom, wildness, emotional richness and sense of ancient history which our music is saturated in will only continue to grow and the link between Ireland and Iceland will, in Sam’s words, “only get stronger and bigger and badder.”