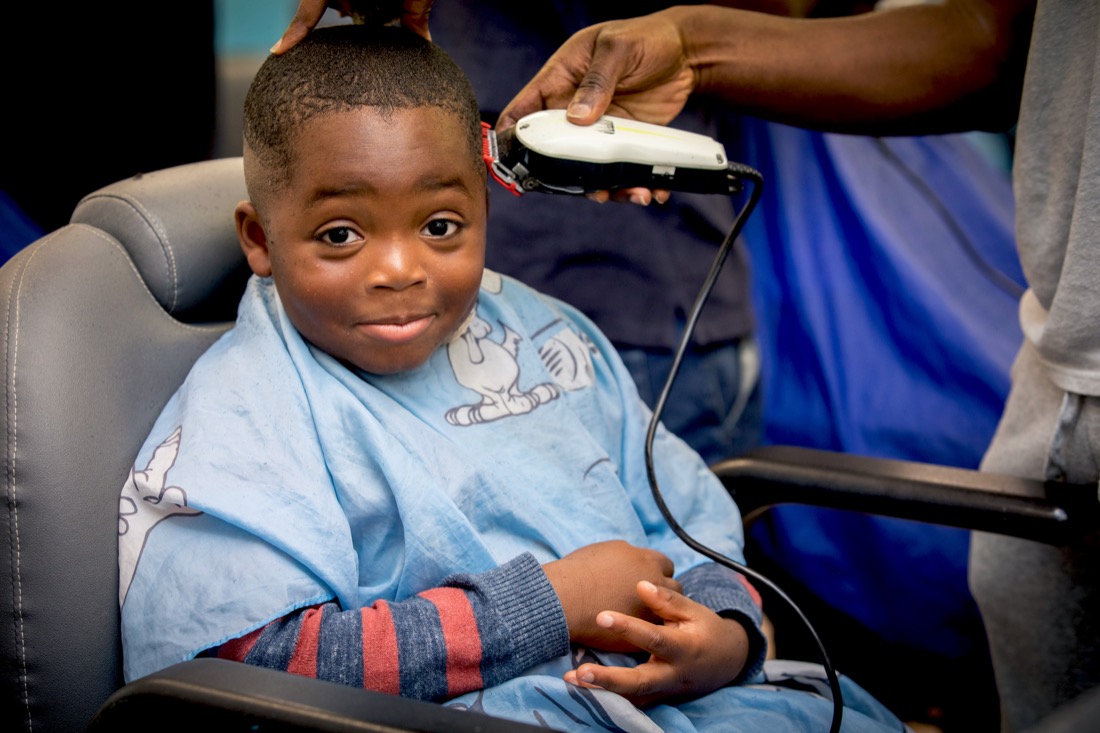 Lucky Gaspard’s hair salon is as much a community hub as it is a hairdressing salon. We join the conversation of the day.

It’s Saturday morning and Lucky Gaspard is late. We’re due to meet at 10.15, it’s nearly 11 and he’s still nowhere be seen.

Francis Notime, one of the barbers, apologies for Gaspard’s tardiness as he searches for a charger for his dead phone. “Do you have a charger with you?” he asks. “I don’t, sorry,” I reply. He goes back looking under desks and in boxes for the right one.

Although it’s still early in the day, the barber shop is starting to get busy. Notime and his colleague, who tells me he goes by “AY”, are already occupied with clients wanting to get their haircut or beard trimmed and have little time to talk.

Just as 11am hits, Gaspard finally turns up. Wearing white Nike runners, brown chinos, and a polo shirt, he welcomes us with a beaming smile.

Gaspard is open to chatting and unlike Notime and AY, seems to enjoy being the subject of a camera lens.

Speaking about the history of the shop, he says that the barbers has been in open since 2004 but he took over operations in 2008.

“I used to cut hair back home, but I wasn’t very experienced,” he says. “I came here and learned for about four years.”

“It is something I love, I am an artist and I have passion for it,” he says.

Gaspard’s shop is located on the corner of North King Street and Blackhall Place on the south side of Stoneybatter. Lime green paint dons the exterior with a colourful banner reading “Lucky Hair Design” running above the door.

To complete the façade, multiple images of people sporting new hair styles extends along the length of the banner.

On the inside, four barber chairs and a wall-length mirror lie parallel to a window facing out on to North King Street. Dozens and dozens of hair products lie on a slightly dipping shelf above the mirror while a grey leather couch sits in front of the window.

Embroidered with “Lucky’s Hair Design”, the couch is clean but well used. Cracks in the seating have begun to appear with the underneath padding protruding through the most sat-on areas – it’s symbolic of the barber shop itself; well-used but comfortable, modest but popular.

As the morning transitions into the afternoon, the barbershop gets busier. Now there are five barbers, all cutting hair with a queue of clients waiting patiently on the grey leather couch.

And as the day progresses, so does the atmosphere. Conversations are loud and jovial, Afrobeat music plays over a single powerful speaker and the front door is left wide open, inviting people in for a haircut, chat and oftentimes both.

Amos Fatogun has come with his family. He says that it’s the first time he’s visited Lucky’s shop but his wife, Bola, has brought their two sons here for the past two years.

“The white barbers just don’t cut the hair the same way,” he says after his cut. “It’s like being back in Africa here.”

Fatogun and his family are originally from Nigeria but now live in Lucan. Although it’s a long way to come just for a trim, Fatogun says it’s been worth it. “Will you stay around the city for the rest of the afternoon?” I ask. “No,” he says, the family car needs fixing so they’re heading straight back home.

While waiting for his turn, another customer, Aon-Badmos Smith, who came with his son Ghaffar, can be overheard discussing the inflated rental prices in the city. He claims that Dublin is now the second most expensive city in Europe to rent in, but another patron disagrees and retorts.

Conversations like Smith’s are regularly layered on top of each other while the shop is in full flow. The buzz of the razors and beat of the music provide the perfect backdrop for animated chatter and it is often difficult to distinguish who is engaged in what topic. Barbers and clients appear to drop in and out of different discussions at will – sometimes chatting politics, sometimes sport and sometimes anything else.

One of the barbers, Idrisse Mahirwe is the quietest of Lucky’s employees and indeed, clients. Between customers he often sinks back into his chair and gazes at the mirror, almost sombre-like.

Although he’s not the chattiest, Mahirwe is one of Gaspard’s most experienced barbers, having known him nearly ten years.

Mahirwe says he studies English from Tuesdays to Thursdays and works in the shop most other days of the week. “I enjoy cutting hair because I like making people look good,” he says. “I’m happy doing this.”

Although the majority of people who frequent Lucky Hair Designs are African migrants and first-generation African-Irish, Gaspard caters for all people and hair styles.

“There is a large Burundi community, Congo community, Nigerian community and we have a lot of different countries. Poland, Spain and wherever. A lot of communities come here,” he says.

Pedro Fernandes, originally from Brazil, tells me that the barbers at Lucky’s “know our hair, you know?”

“Everybody here is very funny and smiling. I could choose any barber shop in Dublin but I really enjoy it here,” he says.

It’s obvious after spending a couple of hours in Gaspard’s barber shop that it’s more than a place where hair is cut. It’s a community hub, a landmark of Stoneybatter and a space where life slows down.

Haircuts here can take up to 25 minutes, but nobody seems to be anxious or impatient. Nobody is in a rush to leave.

Talking to Gaspard about how his shop transcends regular barber duties, he says that a lot of the people who come in don’t even get a haircut – it’s sometimes just a space for people to find peace.

“They sit down and chat,” he says. “If you have any appointments or are going somewhere or just need a place to relax, you can just have a seat.”

When the lunchtime rush finally fades, AY begins to relax and for the first time today, allows himself to be pictured.

As he sinks into the couch, I ask him why he thinks Lucky Hair Design is so popular.

“Lucky is a good guy, he is accepting of people. I wanted to come over here and prove myself and he allowed me to do that,” he says. “That’s all it is.”

Before leaving, I ask Gaspard what his plans are for the future and what he hopes his shop can become.

“I don’t know, I don’t know tomorrow. I just keep on going. It’s not easy but I keep on fighting and keep going,” he says with that beaming smile.