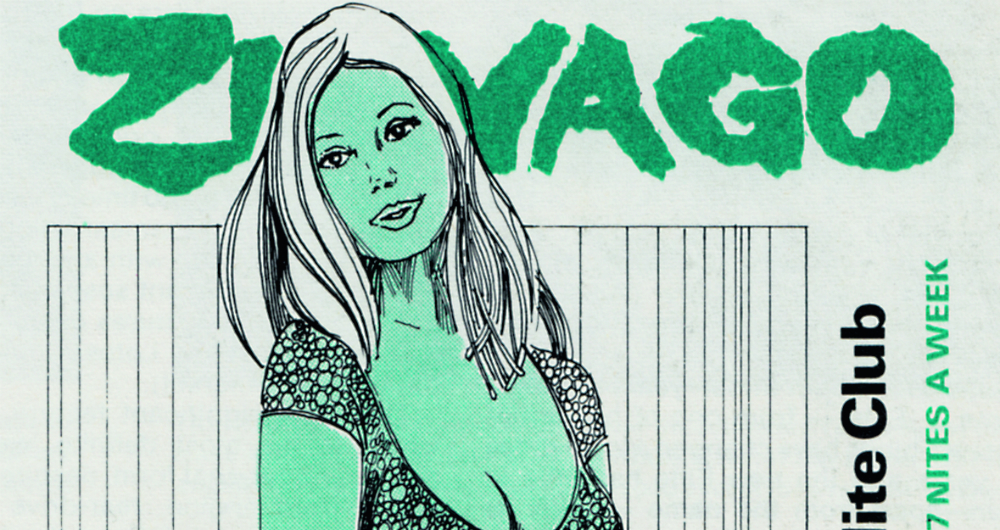 In the Spring of 1970, in a laneway just off Baggot St, Zhivago opened its doors and began its reign as Dublin’s biggest and most popular nightclub of the 1970s.

Zhivago had three separate dance areas with one devoted to slow sets. James Brown’s Sex Machine became its first big dance floor anthem. The club opened seven nights a week until 3.30 and also boasted a seated restaurant, a self-service snack bar and an arcade games room with pool and pinball. The club took its name, typeface and look from the 1965 movie Dr Zhivago.

Legendary Dubliner Jim “Lugs” Branigan managed security at the club. The ex-boxer and ex-Garda sergeant was known for his unconventional law enforcement methods. His team scrutinised customers at the door, checking their behaviour and dress (no jeans or runners allowed). If there was trouble, Lugs would step in.

One melee he settled was the time a furious punter assaulted band members because they didn’t play the full version of the national anthem. Back then, it was the norm for clubs to close the night with Amhránn na bhFiann.

Another nightclub norm in 1970 was that you couldn’t get a drink! It was illegal to sell alcohol after hours but an exemption in the licensing laws meant that wine could be sold, if served with a “substantial meal”. Zhivago satisfied this exemption by including the price of a meal in their admission fee.

We won’t talk about the quality of the wine but when Zhivago claimed to be “Europe’s No 1 Nightspot” a visitor found this “harder to swallow than the wine they serve.”

A seductive cinema advert shown nationwide brought the club and its slogan “Zhivago – where love stories begin” into the public eye. 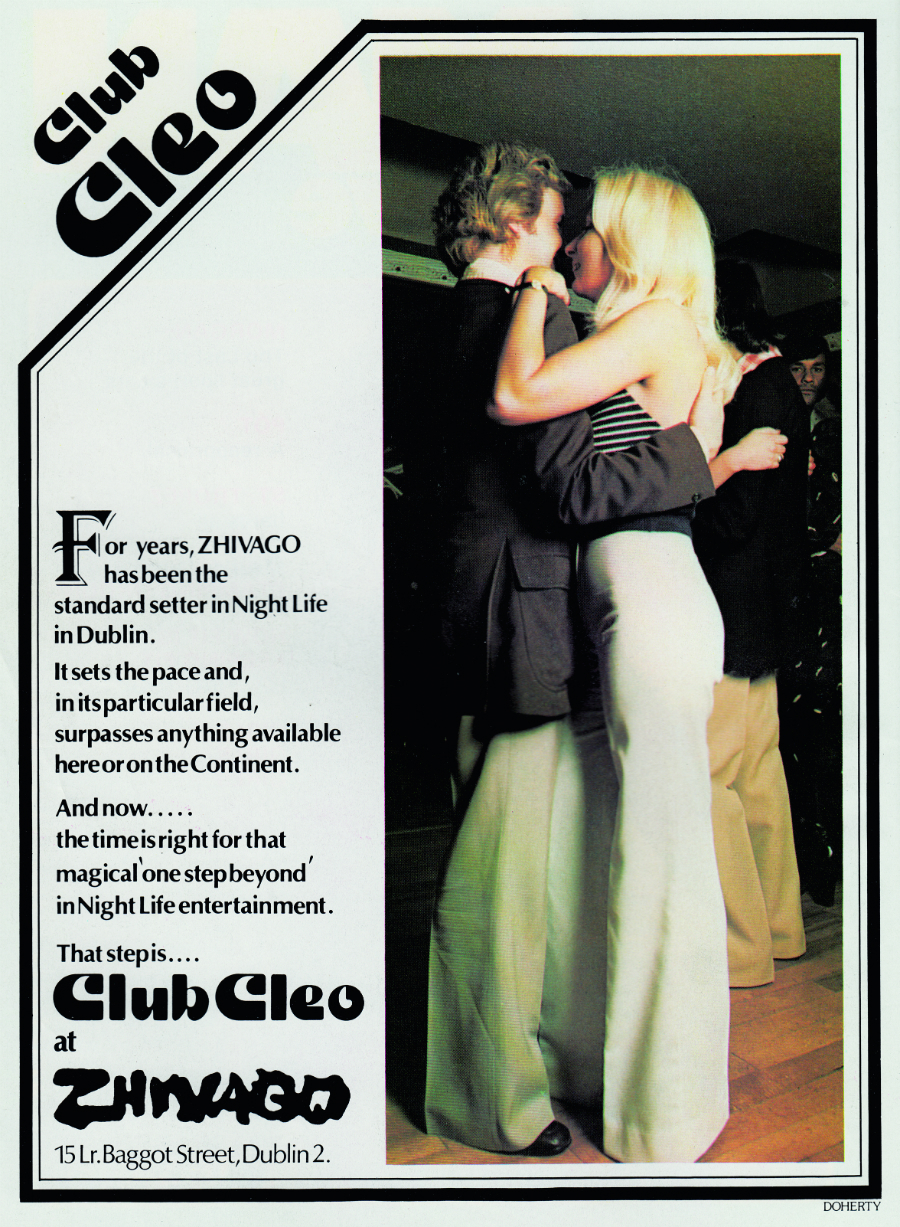 Full page magazine adverts and a series of intriguing personal ads at the back of the Irish Times aroused interest further.

Zhivago targeted an older crowd, older than those frequenting the alcohol-free beat clubs and the popular Sloopy’s nightclub.

Charlie Murphy, manager of Zhivago in 1971, told New Spotlight magazine, “we intend to aim for the showband crowd. At the minute they think of clubs as drug-ridden dens of iniquity, We have changed that image.”

Not surprising then, that in 1974 an unimpressed Man Alive magazine described Zhivago as “popular, well run and deserves its success, but is pretty tame… and not for a raver hell bent on sin.” It continued, “… the music is the usual middle-of-the-road turgid pop from nicely turned-out groups and DJs.”

Six years later in 1980, Lynn Geldof’s review for In Dublin magazine was more positive; “thousands come to this emporium of surprises, the lighting is wondrous, the floor extensive and the seating is arranged cinema style for gawking purposes… the music is charts, motown, reggae, disco, rock n roll, no holds barred.”

By the mid 1980s, the club was in decline with punters shifting (sorry!) to the burgeoning Leeson St. scene. Zhivago closed and converted to 12,000 sq feet of office space in 1987. The Sunday Tribune became a tenant. 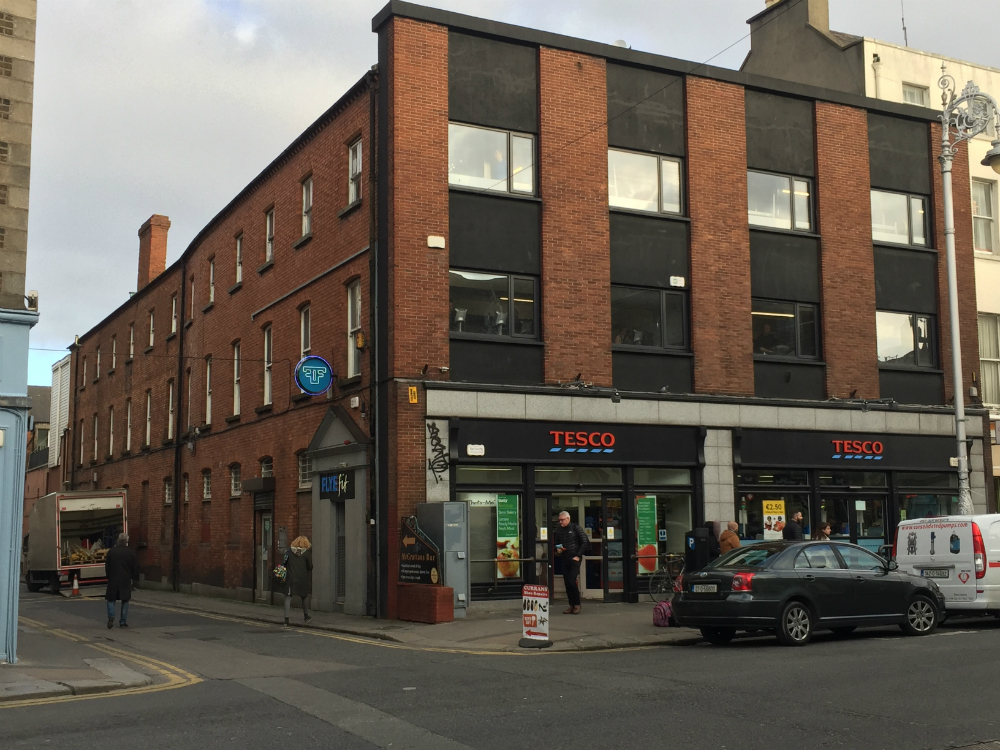 And now? Zhivago is a gym, opening each morning at 5.30 am. I will visit this old red brick building soon and climb the stairs to where the dance floor was and where love stories really did begin. I’ll take out my iPod, put on my headphones and play Sex Machine.

You can discover more and make suggestions for future features

Zhivago was located in the 2 floors above the old H. Williams supermarket (now Tesco) at 15 Baggot St Lower.