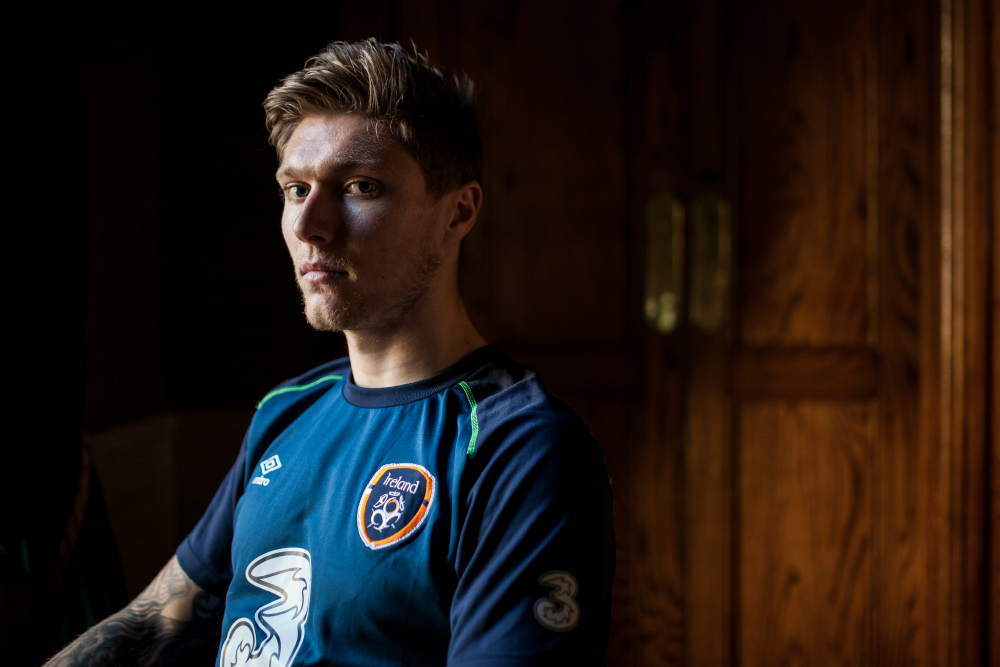 We often chat to young Dubliners with interesting jobs, and Jeff Hendrick’s job as part of an élite group of athletes keeping the nation’s hopes alive in the Euro 2016 qualification, has a pretty interesting job indeed.

Ahead of the crucial game against the Scottish in Celtic Park last month, much had been made of the origins of Aiden McGeady and James McCarthy, both growing up in Glasgow’s Castlemilk district, but more surprising perhaps is the dearth of players in the Irish team who originate in the nation’s capital. Despite the obviously large population base that Dublin has, surprisingly few of the current Irish squad have their origins in the city itself, especially among the younger players (though older, more established players like Robbie Keane and Stephen Ward are of course from the city.)

The modest, shy 22-year old lad who grew up in Kilmore and Artane now find himself sharing a hotel room with another lad from the same St Kevin’s Boys under-8s team that he joined in the late 1990s, Robbie Brady. Their paths have closely followed one another from leaving the suburbs of the Northside for England as 16-year old boys, eventually finding their ways into their teams in England, Jeff at Derby County and Robbie at Hull City, via Manchester United.

‘Coming up we had a pretty good team, we were always winning a lot and there were a lot of eyes on the whole team,’ says Jeff, ‘but it’s cool that me and Robbie and still playing over in England and in the Irish team together. I did trials at maybe 13, 14 different teams, a lot of teams. Once you turn 13, that’s the league’s rule, you’re able to go on trial, you’re old enough. Nearly every break we had [from school] we’d try and get away on trial if clubs wanted us. Sometimes you’d go to the same club a few times. At times it was fine, say if you go with a group of lads you know. Other times it’s pretty boring, and you’d count down the days to go home. You just wouldn’t feel a part of it really. You’re going over to take English lads’ position, so they weren’t too happy with it, so they wouldn’t make you feel welcome. But then when I got to Derby, there was a few other Irish lads going over, I think there was four or five of us, so that helped me settle in.’

Hendrick comes across as a young man whose mind is pretty much focused solely on the beautiful game. ‘A lot of people used to ask if I got homesick at all,’ he says of his early trips across the Irish Sea, ‘but I think I was just looking forward to playing football every day that I didn’t think of it in that way, I think it was more a few months later when I’d get home, and it’s great to see [the family] and when you’re going back from the airport a bit down because you’ll miss them but once you get back playing you forget about it.’

Even the fervent atmosphere of competitive international games, particularly the match in Celtic Park against Scotland, ahead of which, fuel has been poured onto the potentially fiery atmosphere by ex-Scottish internationals like the bilious Gordon McQueen, he’s prepared to take in his stride. Footballers are known for their love of the cliché, and perhaps the one that attempts to explain away the peculiarities of their working life – ‘that’s football’ – is the most pervasive: ‘You’re that focused on the game, maybe you notice it a little bit walking out, but you’ve got a job to do, so you don’t really even think about it. I think we’ve all heard that, and read that, the atmosphere towards [Aiden McGeady and James McCarthy] might not be the best, but… that’s football. They’ll take it.’

Hendrick’s most visible contribution to the senior team no doubt happened in the match in Gelsenkirchen in October, when his cushioned, volleyed pass set up John O’Shea’s late, late equaliser. Even of this, Hendrick is bashful: ‘Yeah, it was good, yeah,’ he mutters, almost blasé about its delicate brilliance. (Mind you, if anyone’s seen Second Captains Live’s ‘Boring Irish Sports Tweets with Roddy Collins’ segment, you’ll note that @jeffhendrick92 makes quite frequent appearances.) Having come through the ranks of all the Irish under-age levels, he seems extremely comfortable, if continually grateful, to be mixing at the highest level, though his debut against Poland in February of last year still sticks out for him, even more so than the match against the World Cup winners. ‘Ah now, it’s totally different playing the underages. You’ve grown up with all those lads, played all the ages groups with them, had a laugh together. Then to come into a new group, I didn’t know too many, but the lads are all great and they helped me settle in.’

Aside from an assist, Hendrick’s other noteable souvenir from the match against Germany is the number 19 jersey from the opposition belonging to Mario Götze, the man who scored the winning goal in the World Cup Final in Rio this July. ‘Yeah I was delighted to come on in the game, to get the result was great, and it was good to get [the jersey] to start my collection.’ All in a day’s work right?

With thanks to Three, primary sponsor of the Irish football team.