An Eye For An Eye: Mervyn Nixon 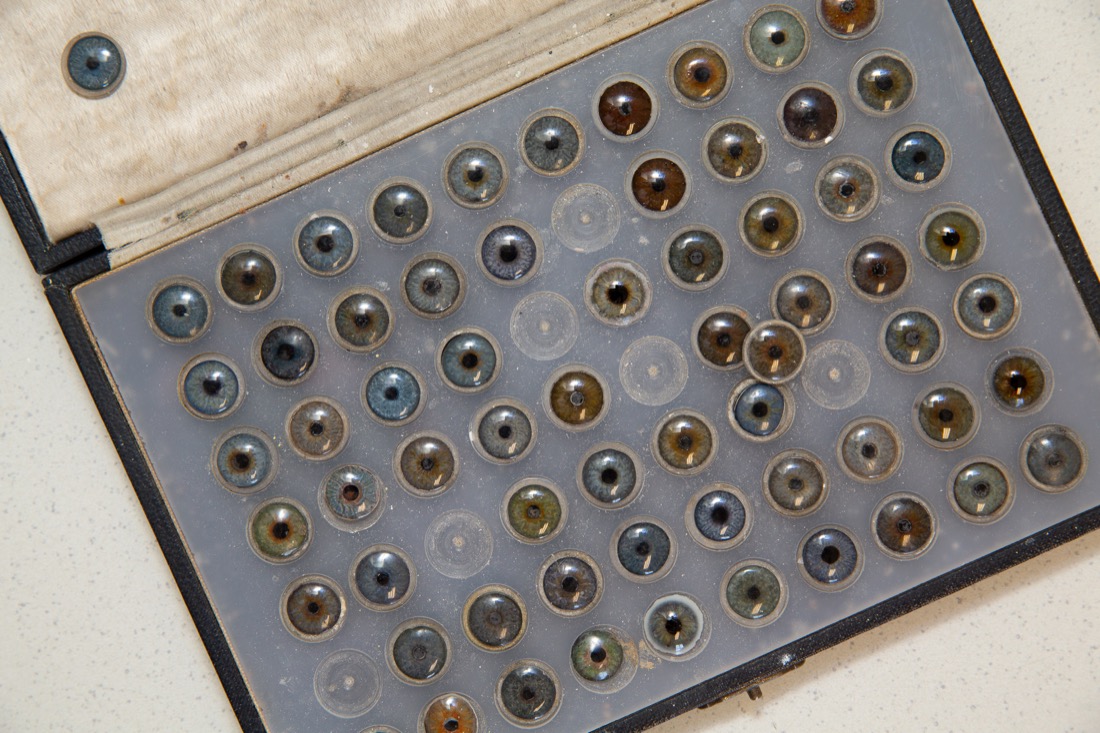 “The display of eyeballs he shows us resembles a game of solitaire, each one nestled in their groove waiting for their next move”

Mervyn Nixon has a mild-mannered, unflappable demeanour which makes him perfect for the niche aspect of the medical profession which he has cornered for the last 40 years. Mervyn makes eyeballs. You could say he’s cornea’ed the market, could you?

Working in the world of facial prostheses, Nixon has encountered all sorts of trauma and steered his steady hands and skills to reconstruct the windows to our souls for over five decades. Hailing originally from a farming family on the shores of Lough MacNean in Cavan, Nixon now finds himself in semi-retirement in Bray tripping into town to attend his clinic on the South Circular Road on a Saturday. 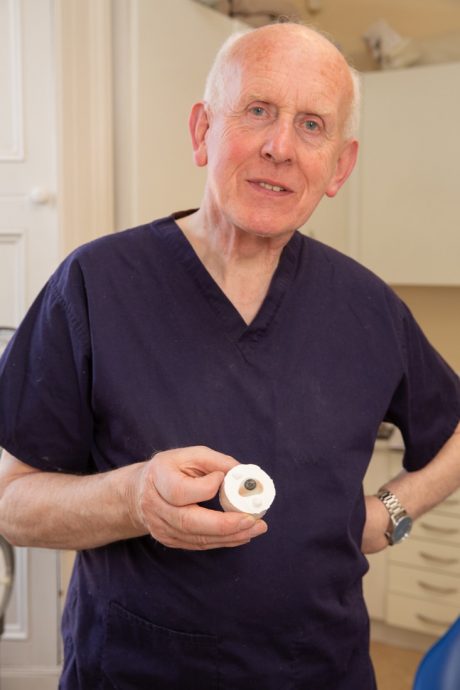 “I started off working with Fannin’s, on 41 Grafton Street, back in 1968. They were the biggest medical supplier at the time. They had a department for this sort of thing so, eventually, I ended up studying in London (with Alfred Lesser) and Gothenburg (Branemark Implant System), took the practice private in the late seventies and the rest is history.”

Marrying medicine, optics and dentistry, this is “the last thing anyone would think of doing,” says Nixon. “It takes a huge amount of patience. It would drive you nuts, trying to get symmetry and appearance right, but it worked for me.”

Of course, in the early days, he dealt with glass eyes as replacements, “making one is one of the most difficult things in the world – it’s hugely skilled, blown like crystal so if you don’t get the size and colour right in one go, it’s gone. They still do them in Germany, which is peculiar for such a highly skilled, progressive, society,” he muses. He goes on to tell me about the progression on to using acrylic as a material which is more temperature resistant. 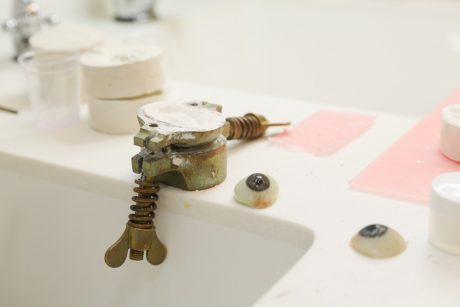 “When I started off, we started using standard stock (eyes), they were pretty good but not exactly right. Then we started making up special prosthesis, injecting impression material into the socket and, then, making up a wax model and get the shape right and the colour.”

Of course, his patients come from all walks of life and the causes invariably vary with changes over time.

“Initially, a lot of the referrals used to come from road traffic accidents where people didn’t have, or wear, a seat belt and where the windscreens were made of toughened glass. If you were involved in a crash, you got thrown forward and your face came down on the broken edge of the wind screen or you were hit by flying shards of glass. It did a lot of damage. Of course, the replacement of it with laminated glass and the introduction of seat belts changed this,” he surmises. 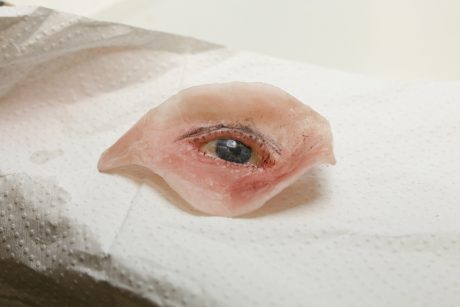 It’s easy to forget that we only introduced seal belts as mandatory in 1971 making it applicable to rear seats as late as 1992. Even by the early ‘80s, it was estimated that only 11% of Americans actually used seat belts.

Nowadays, cancer appears to be the main culprit though Nixon states it is, “one of the best areas to get it cause it’s like an egg and if it’s inside the eye once they zap it that’s the way they get it.” And there’s the random accidents such as the “child with catapult” moment. “I had a child who lost an eye when their hula hoop broke, all sorts of silly things which will always happen.” The one which makes him “cringe” at the moment is the danger of pet excrement and toxoplasmosis which can occur if kids inadvertently pick up the parasite.

It is worth noting that Nixon’s trade is not related to efforts to restore eyesight but purely aesthetic, emphasising the social and psychological benefits. 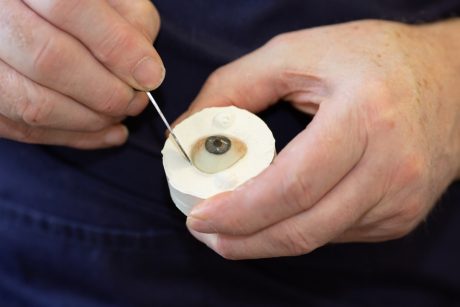 “There’s no physical attachment between eye and the tissue,” adds Nixon. “Your socket is simply a pocket and the eye pops into that. The back of the socket may have a certain amount of contour in it and you have to capture that with an impression and lock the eye into that shape and that will give it movement.”

“Folk still get excited about the possibility of a transplant eye, though that is not possible and may never be because the optic nerve will not regenerate itself. It really is a cornea transplant so it is the lens that they replace and leave the eye but a total one is not possible. They tried it and could only get light perception between light and shade and then it just broke down. The optic nerve will not integrate with the transplant eye.”

And in terms of eyeball maintenance, it’s something people become very adept at. “You take it out once a day for a good clean,” he says. “Our natural eyes absorb protein into them to make them work but an artificial eye can’t so, after a while, you get build up and can hardly see. It’s like sandpaper and becomes an irritant.” Contrary to popular myth, he doesn’t have eyeballs floating in glass jars. The display of eyeballs in his surgery resembles a game of solitaire, each one nestled in their groove waiting for their next move. Nor does he use the (Clockwork Orange) speculum with patients, “I need to have the lids in their natural position so only use a minimal amount of stuff.” 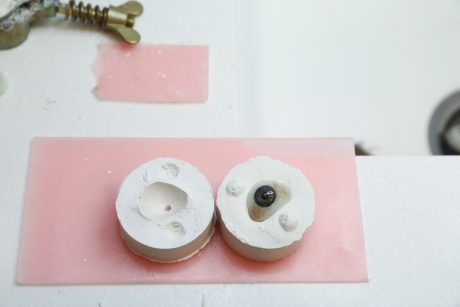 As he reflects on a lifetime in the field, rest assured Nixon isn’t going to breach ethical codes or confidentiality by naming figures in the public gaze who are models for his work. “Of course, I’ve come across a few well known people in society, but am bound to secrecy. I suppose there is still a certain of stigma attached to it and now with social media… I’ve had some politicians in here. Gordon Brown made no secret of his and, cosmetically, he was fine.”

Nixon has advised the Wax Museum and another ancillary request involved taking the eye to the horse in France some 40 years ago. “There was a famous racehorse over there that lost its eye, so I was asked to go over and create one for it. It’s huge in comparison to a human one, like an ostrich egg, but no, I’ve never been approached to create one for a pet here.”