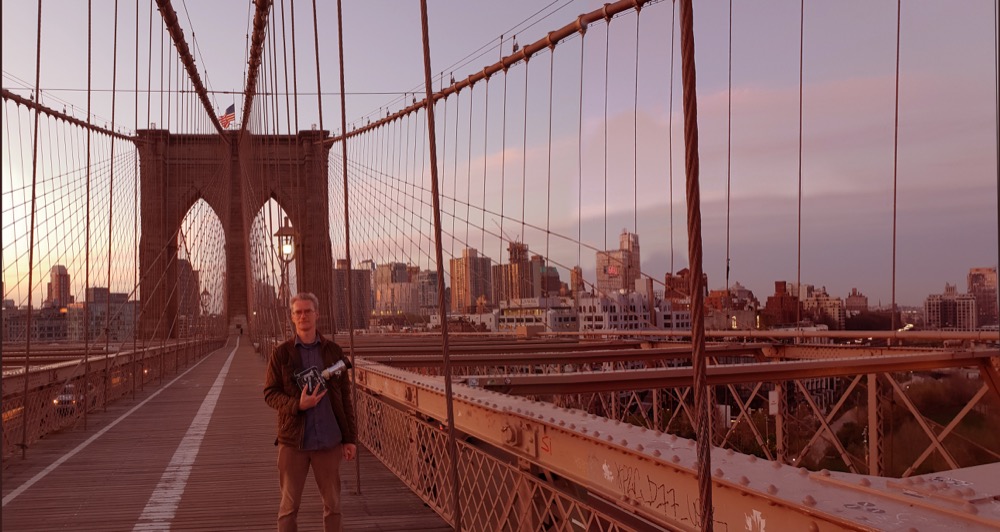 Irish artist Alan Lambert has been creating and producing award-winning, science fiction art films conjuring up fantastical worlds on shoestring budgets. There are four days to go on his fundraising plans for new adventure and challenge, The Iron Mountain. If it reaches €3000 he can start shooting at the end of August.

What is Metal Dragon? When did you first garner an appreciation for creating sci-fi art films?

Back in 1999 I was trying to come up with a name specifically for making film and video work. As most of my commercial artwork at the time was in Asia (China and Korea and later Japan) and I had shot a lot of my footage in China, it seemed appropriate to name myself after the millennium in the Chinese calendar. The year 2000 was the year of the Metal Dragon.

That was also the point when the seeds of the sci-fi art film were planted, because all the footage I was working with suggested a colourful lo-tech re-telling of the traditional Asian stories of the Monkey-King, which were common to all the places I had been working. But rather than the clouds and mountain plateaus of ‘Monkey-Magic’, which we had grown up with on Irish TV in the ‘80s, it could be set in minimal futuristic environments – hotel rooms and neon city-scapes – with the mythical animals and deities of the original stories changed into human characters. This could be economically finished in studios in Dublin. That project finally became The End Of The Earth Is My Home, which premiered in the Darklight Film Festival in 2012.

That approach of gathering exteriors in far-flung locations and inserting characters into them back in Ireland, is something which I have sustained with my subsequent films.

You seem to stand outside the usual spectrum of film board financing and networks preferring to shoot and edit by yourself. What are the benefits and constraints of this?

The main benefit of working the way I do – improvising and collaging a lot of elements that would normally be scripted in advance – is that there isn’t the pressure of a shooting schedule. You can gather some images, sometimes with actors, sometime with other elements, and take your time to edit each section before you even decide what the next section will consist of, or even what the overall film is about. To my mind that organic way of working is simply the natural way for a painter to make films – and painting is my first love, and is what I studied, so it doesn’t feel to me like an alternative way of working. It’s actually the logical approach.

Your name cropped up in an interview with photographer Eamonn Doyle last year. Can you explain the connections and the class of Dun Laoghaire?

Eamonn and I graduated from Dun Laoghaire College together in the early 90’s and had been sharing studios all through the nineties, building recording studios amongst other things. While I was working in Asia and gathering the footage described above, Eamonn was starting D1 Recordings, the first independent Irish electronic music label, which had its 25th anniversary earlier this year. Eamonn and I shaped the first few D1 videos from Super8mm footage that I had brought back from Shanghai – a Shanghai that was only just opening up to the west, so the imagery was all very new for us in the late 90s.

The class of Dun Laoghaire, for me, extends a little bit beyond our actual year, because while the design work for all the D1 releases was being done by Niall Sweeney, who graduated in the same year, the artwork I was doing concurrently in Asia was actually in collaboration with my cousin Jay Roche, who had graduated the year before. So my ‘class’ contemporaries spanned a few years.

You worked on Vita and Virginia which is being released here next month. Can you explain your role and other work you do outside your own projects?

When I work in film outside of my own projects it is usually on commercial productions, so I get a taste of what it’s like when you do have a strict schedule and a plan. It is very stimulating and challenging in ways different to making the audio-visual tapestries I’ve described above. A commercial production gives you an appreciation of the skill-sets that each member of the crew brings to the project, and how important it is to keep a clear direction in your own work for the sake of the team – you can’t go away and think about it for a month!.

My job on Vita and Virginia was to recreate Virginia Woolf’s art collection, consisting mostly of the paintings of the Bloomsbury group. I was very aware that if I didn’t successfully achieve this the credibility of everyone else’s work would be jeopardised. That’s the realisation that always strikes me when I move back and forth between my own films and working on commercial ones – commercial films are often a more social and collaborative process. Thankfully, on Virginia I had the right collaborators and I think the art department recreations in that film are as authentic as we could make them and a credit to the team – designer Noam Piper and art director Neill Treacy.

Your friend Annie Atkins drew attention to your low-budget inventiveness in an instagram story to aid your Indie GoGo campaign for your latest feature The Iron Mountain. What is its premise? Who is Minik? What are you hoping to raise to create it?

Yes, Annie has been helping to focus the look and style of the current campaign and the project has really benefitted from her wealth of design experience. In contrast to my earlier myth driven fiction works The Iron Mountain is actually a true story, but it has many of the characteristics of my previous films, mainly in the form of cultural cross-overs.

Minik was an Inuk boy from Greenland who was brought to New York in the late 19th Century by Arctic explorers. He arrived with his father and friends, but with no immunity to the diseases of southern climates the adults all fell ill and died within months of arriving in Manhattan. Minik was the only survivor. At 7 years of age he was adopted by the superintendent of the Natural History Museum. He later discovered that the bodies of his father and friends had not been returned to Greenland for respectable burials but had, in fact, been passed on to the Museum’s permanent collection. He began to campaign in the popular press to have the bodies returned – something that did not occur until the early 1990s, over 70 years after Minik’s death. 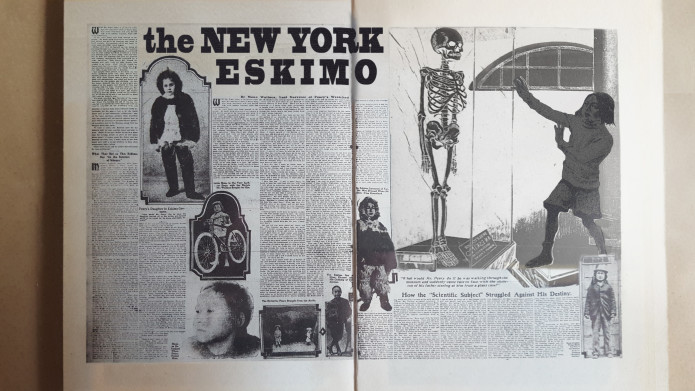 There are timeless issues of identity and ownership which frame Minik’s story, and I feel that it is a story worth telling in any form as it is not as widely known as many cases of 19th Century misconducts of science. But it is also a story that is quite difficult to fit into a commercial dramatic structure, which is why it may be better suited to alternative working methods and non-commercial forms. I’m drawn to the idea of recreating New York of the 1890s in Dublin now, and building the film step by step, like my previous work, but using the time and freedom that it gives me to make sure that these sensitive themes are explored responsibly.

However, it does need a larger budget than my previous works, so I’ve set up an Indiegogo campaign which runs for about another month, with a €25,000 target ( my previous films were all made for less than €5,000). I’ll still make it for whatever I can raise, but higher production values on this project would be a move in the right direction! and I’d like to expand the crew as well.

Can you give us some insights into how you conjure up such fantastical films on shoestring budgets? Why do you feel you stand outside the pale of recognition and support or is it a conscious decision?

I rely on good old fashioned suspension of dis-belief and the viewer’s ability to inject vast amounts of time and space into a simple image (otherwise called ‘using your imagination’) – for example, in Pushtar (2015) I shot on Killiney beach, facing away from the sea, and then simply captioned it to say ‘Pakistan – the year 2365’. With an image that consists of just rubble and sky, who’s to say otherwise? The rest relies on the viewers imagination. But that is actually a tradition that predates moving images – fire-side shadow plays have relied on that same ability in the audience for thousands of years. The viewer doesn’t realise how much of the work they are actually doing themselves.

Has there been a noticeable shift in your subject matter and what interests you over the course of your releases – The End of the Earth is my Home (2012), Pushtar (2015) and Circles of the Sun (2017)

Artists working in any practice have to see several projects emerging over several years before they really see the underlying themes that run through all their work – as I mentioned above, cultural crossovers are definitely a running theme, although their contexts shift from a very colourful work like ‘The End Of The Earth Is My Home’ to a more sombre small ensemble piece like ‘Circles of the Sun’. Another difference is that, in each film, I have become more aware of scientific accuracy. Possibly because each film moves further away from the fantastical and the myth oriented source material and becomes more focused on the representation of a very different, but still very real world – like the ‘post climate-change’ India of Pushtar, which may have pink and lilac skies, but not out of some artistic fancy, rather because the higher levels of dust and carbon dioxide will actually change the colour of the sky. Embracing a true story like Minik’s is a continuation of this move towards representing real but very different worlds and life experiences.

Who are your cinematic and literary heroes? What has inspired you most of late?

It’s very difficult to say who my cinematic and literary heroes are, but of late my inspirations have come from outside of the film arts. It’s mostly rocks from space that I have examining in recent months, visiting three large Meteorites that were the reason that the Arctic explorers befriended Minik’s father and friends in the first place. The Inuit knew where these valuable iron meteorites were and the Americans wanted them…

Standing in front of them in the Museum of Natural History in New York, over 120 years after the events I hope to depict in The Iron Mountain is more thought provoking than any film or painting I’ve seen this year!

It is quite incredible to run your hand over them and think ‘they’re not from the earth’!