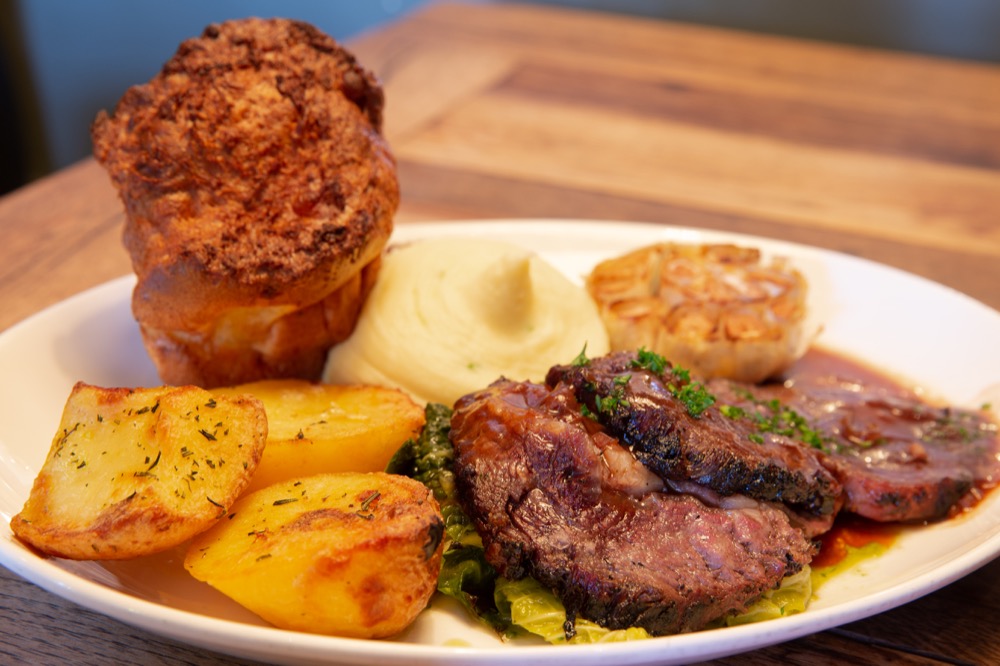 Those of you who purport to know me will be aware that I tend to keep the Sabbath holy. That same privileged few will also understand that this has more to do with the diabolical nature of my Saturdays than any belief in the existence of magical sky-friends or bloodied saviours. Nevertheless, in the general course of things, I don’t roll on Shabbos. I’m motivated to shift this ingrained pattern of behaviour because apparently, brunch has been supplanted, as a thing to talk about in ‘food circles’, by the ‘Sunday Roast’. I’m unsure what this means existentially for Saturdays, but these are words that require little unpacking hereabouts. It means that a joint of an animal (or a whole bird) will be cooked (in a hot oven) and served with some ceremony. It is a reward for a week of Christian soldiery and graft, a post-worship portion of viands with ‘all the trimmings.’ Those last three words there form a phrase that I’ve always detested. I’m unsure why. I feel the same way about The Full English. Although we Irish-Euro types have (if we were lucky) likely partaken of this ritual about fifty-two times a year around our Hibernian tables, we must cede its provenance to our fellow English speakers across the Irish Sea. The Sunday Roast speaks in a British accent and its breath is redolent with the iron tang of Beef. The omnipresence of Yorkshire puddings in the platings only serves to underscore the fact that what we are dealing with here are great, steaming portions of pure John Bull.

Of course, in the event of a no-deal Brexit, the Sunday roast may need to be pushed out to become a monthly or even bi-annual event. If the mooted gastrocalypse does indeed come to pass, on the Sabbath, as with other days, our proudly non-European neighbours could be reduced to feasting on rodent flesh. I can see them clearly in my mind’s eye, huddled around flaming barrels, grilling rats on little sticks that once carried wee union jacks. No more of that French or Italian filth for Les Rosbifs. Or foreign, or whatever. Irregular shaped vegetables will find no sanctuary ‘pon their sceptred isle. There will be nary a frankfurter to fling into those gaping Brexit-maws, never mind a Berliner. Holes will be toadless. A surfeit of Buckfast with which to sluice down their meagre repasts should offer a measure of sickly-sweet comfort as Farage’s ghastly visage gurns from the sides of dilapidated red buses. If this is what victory looks like, try to imagine defeat. I was going to invoke Hieronymus Bosch but that wouldn’t really be cricket. 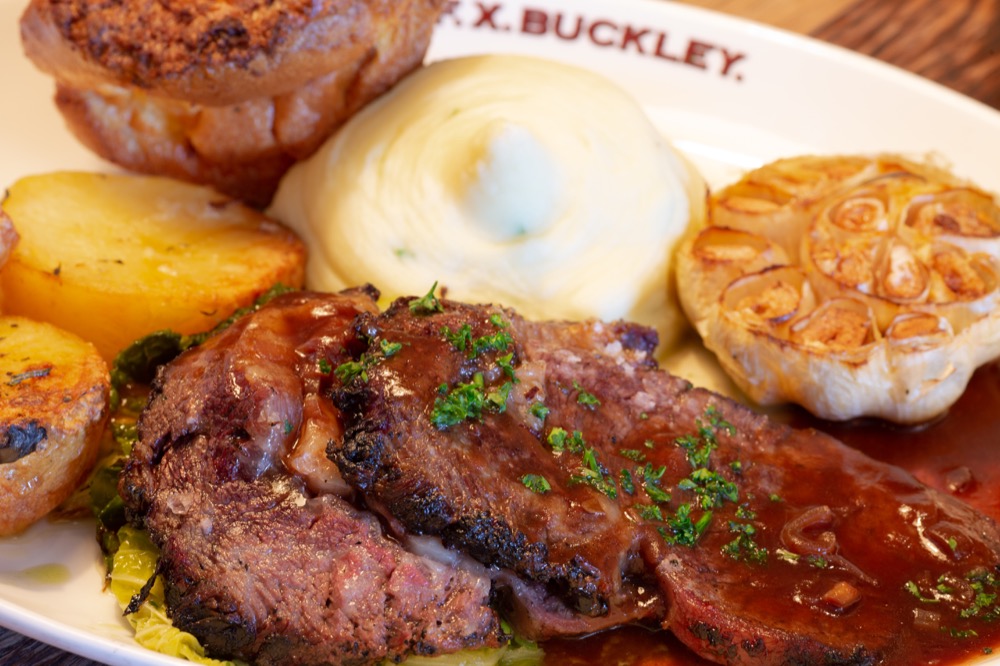 So then, Sunday roasts – this is not intended of course to be considered as a definitive ranking of the finest such meals available – my editor would never countenance the necessary largesse. Rather, this is a side-by-side comparative review of two places that tend to feature in the most-roast debate. I’m also conscious that our modern comprehension has been re-ordered to merely understand things framed as oppositional binary choices. It is Mothers’ Day when we visit F. X. Buckley at The Bull & Castle (or Mothering Sunday as our staunchly independent neighbours would have it) but I’ve got no skin in the game. For this late-orphaned critic, every day is like motherless Sunday. A well-made Bloody Mary goes some way to filling the void while I pretend to peruse the menu. Our window table affords us an arresting view of ravening gulls ransacking the restaurant’s bins. I imagine that it could be considered a compliment to the kitchen. The room is a rather gloomy affair, it feels a little Medieval Times. Having decided that the metrics of this review should allow for Bloody Marys, roasts with a couple of glasses of modest wine and perhaps dessert, we proceed directly to the main event. When two enormous oval plates are placed before us, I feel as if I’ve inadvertently strayed into a competitive eating contest. There is a bonanza of carbs on display, with passable duck-fat roast potatoes sharing space with decent pommes pureé and a Yorkshire pudding that could be worn as a hat. The rib of beef however, while flavourful, is unforgivably grey, although it was pointed out upon ordering that ours were the last two servings in the house. A head of confit garlic is a nice touch. For €17.50 one can’t really quibble. A freebie dessert of ‘Black Forest Trifle’ consists of bits of brownie atop some kind of cherry jam/coulis confection. You get what you pay for. Service is warm and attentive. We repair upstairs to the very handsome new bar for some well made strong drinks and consider further possible Brexit permutations. 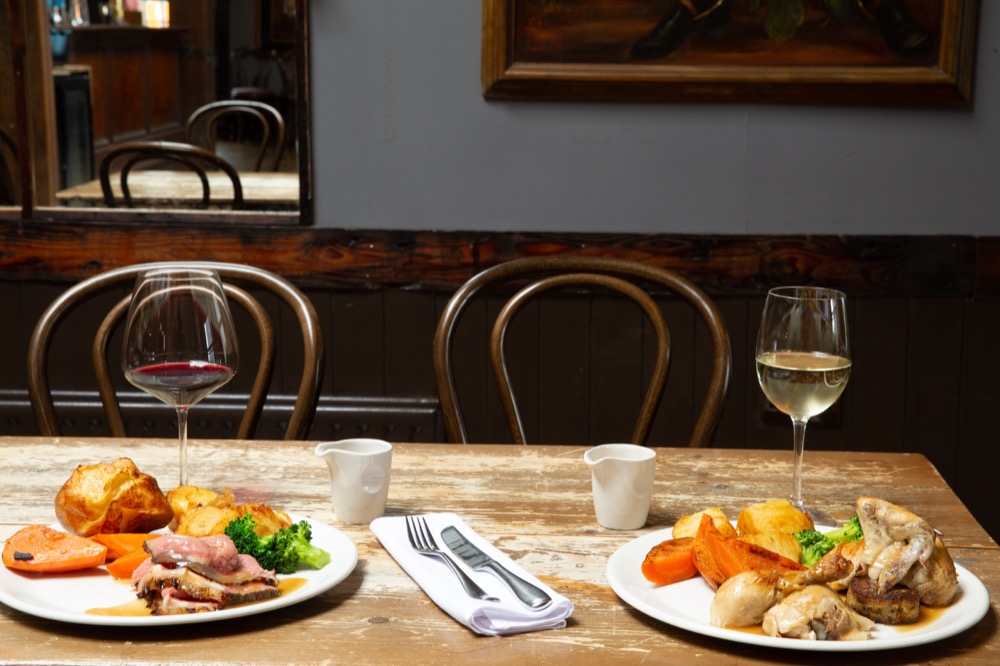 The Old Spot on Bath Avenue is a somewhat different proposition, in that it is extremely neighbourhood specific. These are the environs of the Aviva stadium and of Google. It is rife with top-tier consumers, almost all income is disposable. From the people who brought you Paulie’s, it’s an agreeable joint. There are high-value blondes of various vintages scattered throughout the room, generally accompanied by men who seem to do ‘the business.’ At the next table the business-man sports an IWC timepiece on his left wrist that probably didn’t leave much change out of twenty grand, on the right he proudly displays a green wristband with the word ‘Augusta’ prominent. This proves to be evidence of admission to a noteworthy golf match at an historically important golf pitch located in Augusta, Georgia, in America. He seems to have missed the end so spends the entire meal scrutinising the scores on his phone. An a-hole in one. Regardless, my Sunday Bloody Mary is spicy and strong and I’m feeling good. 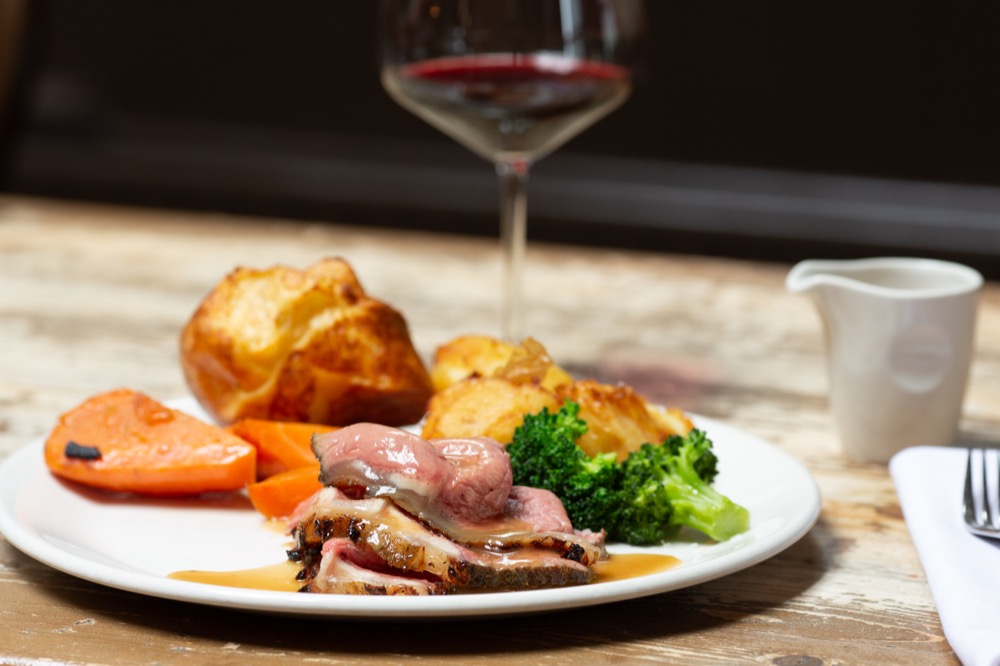 €24 bucks here buys you a more manageable Yorkshire and an abundance of ‘Pat McLoughlin’s Dry aged Sirloin of Beef.’ There are more duck-fat potatoes and a little cauliflower cheese to set the pulse racing. The cooking on that beef – a perfectly blushing medium rare, is what wins it for the Old Spot, although I’m not convinced about the gravy, a little sweetness betrays the presence of some kind of bought-in demi-glace, when all I want is jus. Again, such considerations pale next to the situation over on the mainland. Perhaps half of them believe they can subsist upon imperfect memories of spitfires, Hovis and Hogarth, the others are welcome to join us for Sunday Lunch anytime.