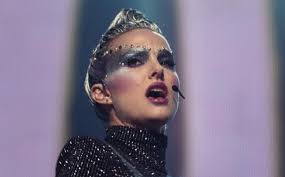 After 2016’s fascinating directorial debut The Childhood of a Leader, anyone with any interest in film was awaiting Brady Corbet’s sophomore effort. His first was an incredibly smart Scott Walker backed coming-of-age film, with a twist. It showed all the signs of a young auteur.

As an actor, Corbet worked with some of the most arresting and exciting directors this side of the millennium – Lars Von Trier, Gregg Araki, Sean Durkin, Olivier Assayas – and with his first foray; it showed. He drew on dark character driven films to install much of the same in his own vision. This time however, in an attempt to further his ambitious curiosity and still tell a solid story, something went wrong.

It’s 2017 and Portman’s Celeste, pop icon and global superstar, is busy planning her sci-fi tinged comeback tour Vox Lux after a string of scandals. Without giving too much away, the film retraces then the pivotal moments that catapulted her into the limelight as a child (including a brilliantly captured tragedy), leaving her older sibling seething in the side-lines. Law plays The Manager – genuinely nurturing and guarding young Celeste, always with an eye on the money. He’s more straight talking rock ‘n’ roll than spermy suit ‘n’ tie.

Forward in time again to 2017, Celeste has tour anxieties and a daughter and sister (Martin) in tow. When Celeste gets on stage, we get to see the megastar perform (awful songs written by Sia), all done up in ice blues and headdress, like a perkier version of Black Swan. The recently deceased Scott Walker is back on soundtrack duties outside of the arena.

Unfortunately, Portman, the Oscar winner, is the problem. She does an OK job amidst all the industry bullshit and social commentary Corbet is hitting you over the head with, but without a real plot, she’s rudderless, and goes way overboard, playing off all the superstar clichés and endlessly, greedily gobbling up the screen.

Corbet too must take some of the blame here. He indulges Portman and doesn’t know what to do with the second half of the film so there’s a terrorism subplot, then a pop concert to finish and it all feels like a bit of a mess. What started off so promising loses its delivery and power the longer the film goes on. Law however, all balls and business, is excellent throughout.