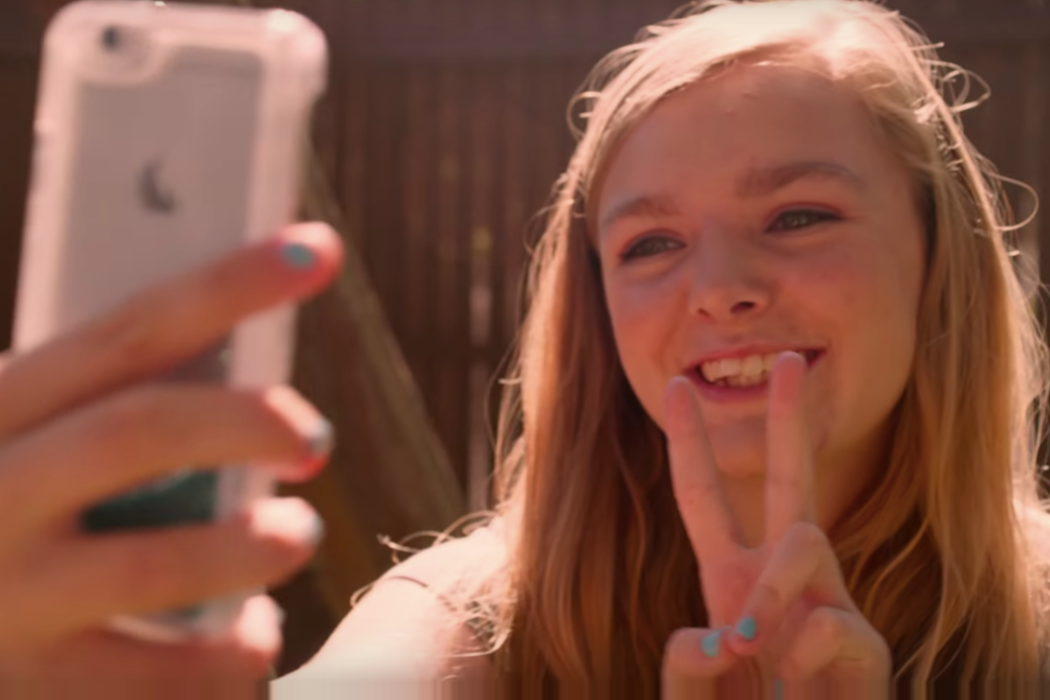 Young people are under siege, their private information harvested, their attention constantly hijacked. Never before have there been more insidious forces vying for their distraction.

Burnham proves himself to be a director of considerable insight, as well as panache. In many ways, a pure product of internet culture himself, having risen to prominence through viral videos, he knows better than to decry it. This is what makes the first half of the film so suffocatingly immersive: its filmmaker understands the self-broadcasting mindset. The film all but inhabits the world of giddy technological bombardment that assails its thirteen year old protagonist – new-feeds, instant messaging, make-up and blow-job tutorials overwhelming the frame, as well as the characters.

The squirm factor is cranked up to eleven as we follow poor Kayla’s shy, yet plucky efforts to navigate this raw teenage landscape. She is achingly normal and relatable. Throughout the film she touchingly posts motivational Vlogs online, a motif serving as an aspirational counterpoint to the reality in which she’s something of a non-entity at school, being voted ‘most quiet.’

What’s more, Burnham understands anxiety. As Kayla approaches a bitchy queen bee’s pool party, there’s a ratcheting up of tension via the score, cunningly effective, as, rationally, we know nothing too dramatic can happen here, yet we still feel every bit of the catastrophising tension.

Though the film sometimes bears the flashy hallmarks of a debut overeager to impress, Burnham’s writing is admirably restrained. Scenes are kept on a tight rein. Kayla isn’t a total outcast bullied in a humiliatingly public fashion; instead, she is subjected to a low-level shunning that we feel in every scene.

Any gripes? Later on, Burnham can’t resist giving his likeable protagonist a few too many moments of personal triumph, realism giving way to reassurance.

Another trick I feel Burnham missed is that smartphone addiction is by no means confined to adolescents; our need for validation has never been more stark in a age when every so often we paw at a glowing rectangle for any developments regarding our social standing.

Nevertheless, a 13-year-old girl abides in all of us, so this is a film that is, like, totally worth our ever-decreasing attention.