Cinema Review: A Bump Along The Way 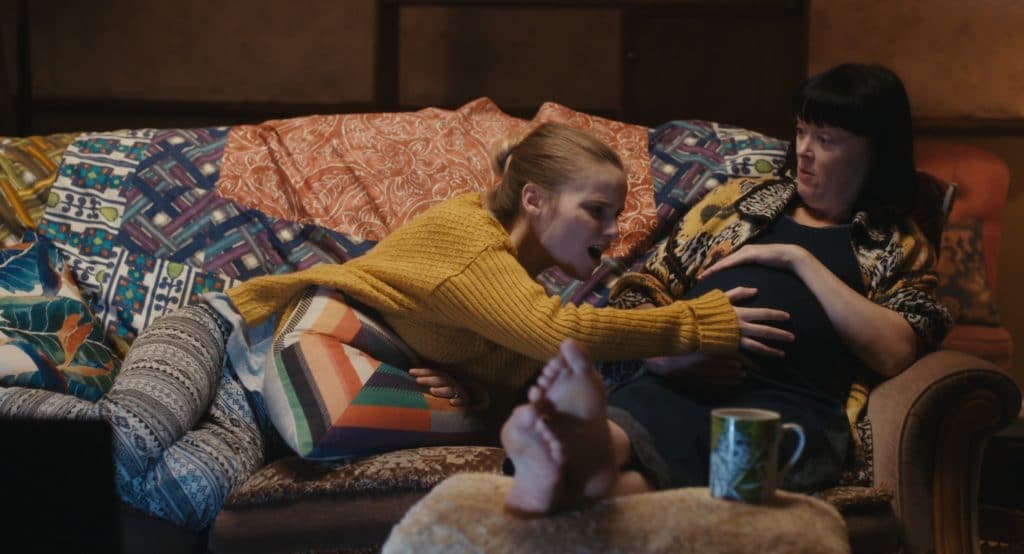 A Bump Along the Way

Good time girl, Pamela (Gallagher), a single mother in her mid-forties, has a drunken tryst with a twenty-four-year-old plumber. Much to her disbelief, Pamela becomes pregnant, despite believing she could never have another child. This proves too much for her daughter Allegra (Petticrew), who is already in a permanent state of mortification due to her mother’s antics – a clever inversion in which daughter is disapproving and mother is hedonistic.

With a crisp script from Tess McGowan – who was pregnant while writing the film – and clear-eyed direction by Shelly Love, this Derry-set film is absorbing and rings true. It’s totally understandable where both Pamela and Allegra are coming from. We see the pressures they face that they keep secret from each other, but might lead to better mutual understanding were they reported. When mother and daughter clash, there isn’t some big reconciliation scene that follows. Things just slowly simmer down, true to the rhythms of life.

The performances are stellar. Gallagher does a fine job of pulling off a tricky role in which she has to be both likeable and somewhat irresponsible. She succeeds with aplomb, her irreverent lifestyle never compromising her warmth. Petticrew – a compelling actor who I predict big things for – matches Gallagher. Allegra can be a haughty vegan, though she is also vulnerable and caring. On the one hand, we see her trying hard to navigate a school where she has to endure abusive behaviour, and on the other, we see her shouting tyrannically at her hungover mother, calling her ‘pathetic’. Her performance is utterly truthful.

Male characters are less sympathetic, confined to either being monstrously self-serving – Allegra’s father and the plumber who impregnates Pamela – or pathetically ineffectual – Allegra’s art teacher, whose attempts to stop classroom bullying are pitiful.

Still, this is the two females’ story, so it makes sense that they’d be depicted with more nuance.

Things end perhaps a little too neatly, with closing scenes that feel rather perfunctory. I wish they had ended with something more consistent with the emotional complexity they’d done such a good job developing throughout the film.

Nevertheless, this is an otherwise solid film with a lot going for it.