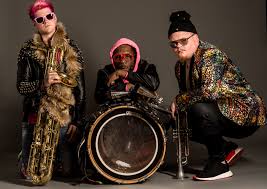 Too Many Zooz is a music group based in New York City, New York, United States, formed by Leo Pellegrino (baritone saxophone), Matt Doe (trumpet) and David “King of Sludge” Parks (drums). Recording the singles Formation and Daddy Lessons with Beyonce on her Lemonade album has brought them to a whole new level of awareness. Their sound has been self-dubbed ‘BrassHouse’. Having busked at the Union Square subway station since 2014, a TMZ viral video launched them on a path which is sweeping up newfound fans. With special support from The Booka Brass Band.