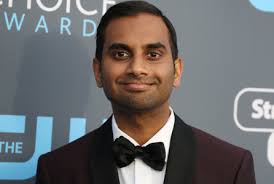 Whether he likes it or not Ansari (Master of None, Parks and Recreation) is up there on vox.com as one of 273 celebrities, politicians and CEOs accused of sexual misconduct since April 2017. It is also fair to note that the accusations against Ansari, while serious, are not of a scale and calibre to those against the likes of Weinstein or his fellow comic Louis C.K. He also seems to be addressing it in his new standup show which we assume he may have considered calling Road to Redemption?