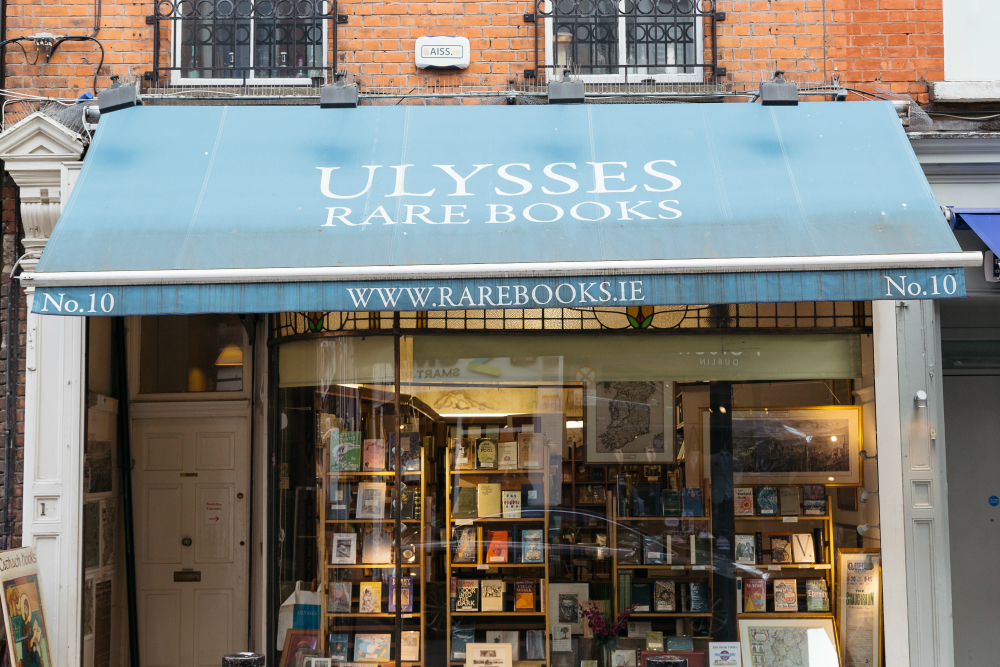 You might have notions about what growing up with a collector-turned-bookseller father is like. Surely, you might think, it would produce dust-soaked childhood memories of giddy scrambles through book fairs; of family rhapsodies over antiquarian volumes of children’s tales. Not so, says Aisling Cunningham, who runs Ulysses Rare Books with her brother David. By the time their father Enda Cunningham took early retirement from teaching and founded his bookshop, he had been collecting for many years. And collecting, for the Cunningham children, meant cramming into the back of a car on a Sunday and driving around their native Donegal to old houses whose occupants had books to sell – and waiting grumpily outside for hours while Enda checked editions and negotiated prices. It wasn’t exactly a glamorous start, but it meant that Aisling and David knew from the outset the patience required in an often slow-moving, unpredictable industry that relies on chance as much as skill. Both siblings fell into the family business. “We were both wondering what to do next and said ‘Sure we’ll just do it for a while,’” Aisling recalls. “I never thought in a million years we’d still be here 28 years later.”

These unpretentious origins have given rise to a bookshop that is endearing and relaxed. Aisling mostly manages the customer side of things, while David works downstairs on auctions and accounts. Tucked away in Duke Street, between the commercial end of town and the museum district, the store stands beneath an awning the exact blue of the Greek flag (that is, the shade Joyce insisted on for the cover of Ulysses, to the great inconvenience of printer and publisher alike). The atmosphere is welcoming. On the Saturday morning I visited, Aisling was in friendly form, sharing anecdotes, recommending titles, removing books from their glass cases for perusal, and generally treating the (many) customers who pop in just for a look or a tote bag with the same warmth as the regular collectors.

While the shop still focuses primarily on Irish books, Aisling and David are happy to adapt to changing demand. They stock more and more children’s books, for example. “They’re my favourites,” says Aisling, “and they’re popular as gifts. If I had my way, I’d love to really get lots of beautifully illustrated children’s books.” The children’s section includes gorgeous stories inimicably illustrated by Harry Clarke, lots of Roald Dahls (some signed), some Dr. Seuss first editions, and various collections of Irish fairy tales. Most of the children’s books range from €75-€400, but they go all the way up to €1800 for a first edition Hans Christian Andersen. Aisling points out a rare two-volume Mother Goose in the window, illustrated by Arthur Rackham, another of her favourite book artists. I particularly like Tír na Deo, Máiréad Ní Ghrada’s first translation of Peter Pan into Irish, and Ishybushy & Topknot, a children’s fantasy written by Charles Darwin’s grandson and his wife. Aside from children’s books, Aisling and David have been buying more U.S. and U.K. fiction, and cutting down on history books, once a major source of business. 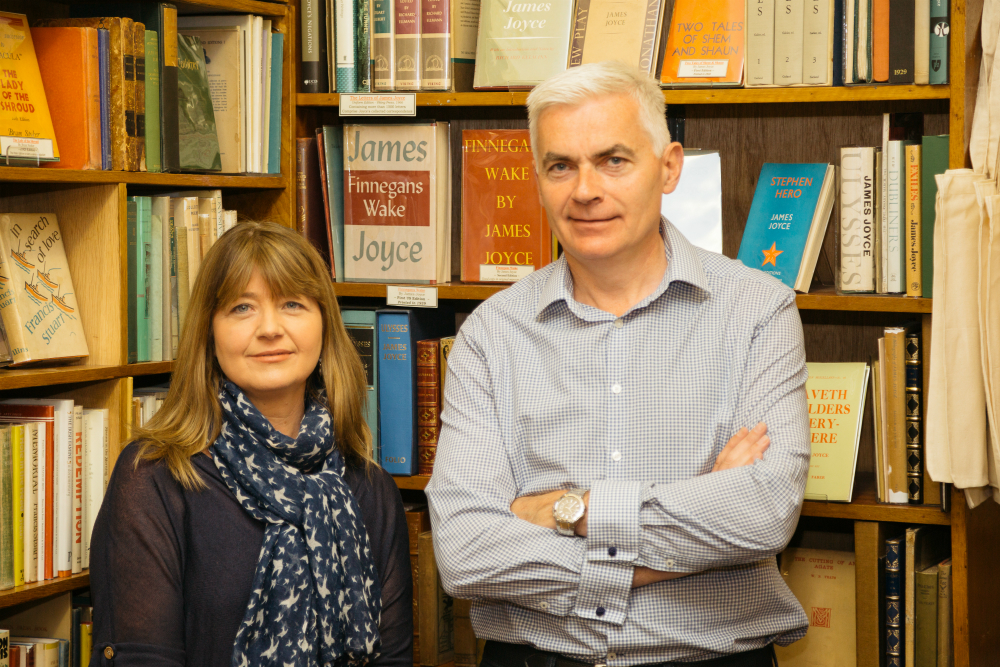 The typical customer has changed dramatically over the years, and the economic recession has had a huge impact on the shop. While there are still regular customers, “the typical collector is a dying breed,” Aisling explains. “We find more of our business now is gifts than it would have been before.” Book collecting has traditionally been a male-dominated world. According to Aisling, around 70% of collectors are men, and they are mostly over fifty. There are signs of a new generation of collectors, with different interests; still mostly male: “Before collectors often bought historical stuff and non-fiction. That has gone by the wayside a bit. Now collectors look for modern stuff… sometimes it’s things like Joyce, Beckett, Hemingway, but there’s a new type who aren’t quite as familiar to me, people who are into things like Neil Gaiman, Philip Pullman, G.R.R. Martin.” Readers with niche interests like horror and sci-fi, are great customers. “They’re so passionate about what they follow – they really know what they want, and they’re willing to save for a special edition or a signed copy, even from a living author.” Prices vary on this terrain, too: a signed first edition H.G. Wells goes for €750, while a signed first edition Harry Potter and the Philosopher’s Stone reaches €1250 (those extremely rare first editions in which the author’s name appears as Joanne Rowling, rather than J.K. Rowling, have been auctioned worldwide for €30-€40,000+).

Valuation in the rare books trade is a curious thing. Aisling explains a few of the factors that influence the pricing of a book: its condition, its edition (first edition, first press is usually – although not always – the one sought after), whether there is a signature, inscription or dedication (signed copies are always worth more, but signed copies dedicated to a particular individual are worth less than the signature alone – unless the dedicatee is famous themselves). I was most surprised to learn the difference a dust jacket makes: Aisling tells me that a pristine first edition of Dubliners without a dust jacket is worth €5-€10,000; with the dust jacket, a similar copy rises dramatically in value to €100-€150,000. In pre-internet days, Aisling describes valuing books according to an intuitive equation based on experience, engaging with the physical book itself, and word of mouth. Rare books are, after all, a space where cultural and economic capital meet niche, somewhat untrendy interests. The internet can allow for a more precise valuation of books – and copies that were once thought rare, if a seller had never come across them before, are sometimes shown to be more common than anticipated.

The internet also gives people unrealistic expectations of what their books are worth, though. As Aisling explains, “people come in to sell us a book and say ‘I saw this online for €500’, but often they’re taking the highest price they’ve seen and aren’t taking into account the condition and other particularities. With the internet, though, you’ll see this variation, where similar copies range between €50-€1000 – in some ways it hasn’t really standardised things.” It is clear that the way an experienced bookseller values a book is more instinctual and more tactile than the basic supply/demand algorithm used online. And sometimes, it really does come down to chance. Aisling tells the story of a book she once stocked by Edward Sullivan, a series of facsimiles of the Book of Kells. She opened the book to respond to a customer’s query on the price, and saw an inscription she had never noticed before. She nervously hoped the customer chose not to buy the €75 book, and when he finally left empty-handed, she breathed an enormous sigh of relief, shaking. The inscription she had just noticed was by James Joyce: he had presented this edition to the parents of Nora Barnacle. The book was, needless to say, worth a lot more than €75.

Internet trade in rare books has also affected business, although not as much as you might think. Aisling feels there will always be customers who want shopfronts. In an age of ebooks and mass production, buying rare books is often about the right feel or the right aura. Buyers themselves frequently purchase from bookfairs, and when they distance-buy it is usually through printed catalogues issued by trusted booksellers. After one experience with eBay, Aisling says “never again”. It is all about touch and presence, she affirms: a signature, for instance, is worth paying for because “you know the author touched the page, even if you weren’t there when they signed it.” 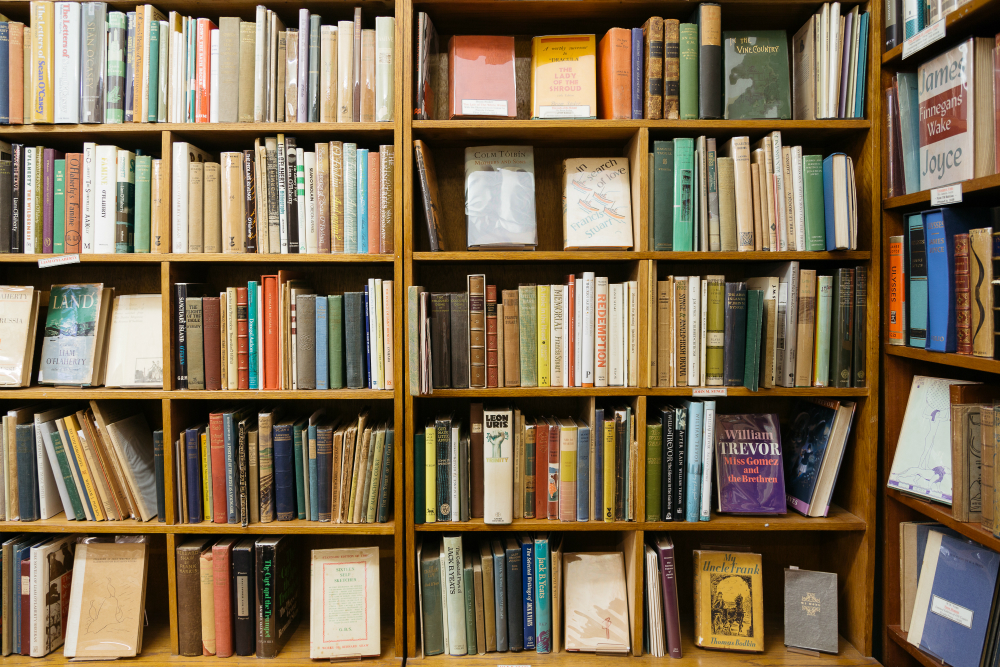 Walter Benjamin wrote an essay on the joy of rare books collecting. The collector, he claims, stands in “a very mysterious relationship to ownership, a relationship to objects which does not emphasise their functional, utilitarian value – that is, their usefulness – but studies and loves them as the scene, the stage, of their fate.” These books hold a special kind of cultural memory – and the shop and its owners are a similarly unique repository of stories. As well as sharing anecdotes about the famous authors she stocks, Aisling is keen to draw attention to books that have been neglected and rediscovered. “It’s often the women who get forgotten,” she says. She speaks spiritedly of Ella Young, an Irishwoman and mystic who hobnobbed with Yeats, hid Dublin rebels’ weapons under her floorboards during the 1920s, and encouraged her students to talk to trees and listen to faeries during a lecture series on Celtic mythology at U.C. Berkeley. The shop has signed copies of Young’s children’s books and poetry. Aisling also points to the fiction of Dorothy Macardle, who is best known as a historian and less well-known as a novelist. (Macardle was also a good friend of Éamon DeValera, and wrote to him indignantly on the 1937 publication of Bunreacht na hÉireann that “[a]s the Constitution stands, I do not see how anyone holding advanced views on the rights of women can support it, and that is a tragic dilemma for those who have been loyal and ardent workers in the national cause.”)

Most customers, though, are interested in works by what Aisling and David call “the big five” – Joyce, Beckett, Yeats, Wilde, and Heaney. The shop’s most expensive book is a first edition of Ulysses, number 901 of only a thousand first editions published, and complete with an average of seven errata per page; mistakes which distressed Joyce greatly but which he never quite got around to fixing in his lifetime. It costs €30,000. While she would be delighted to sell it, Aisling says that selling first editions of Ulysses is a bittersweet enterprise: copies are ever-harder to come by, and having one on display is a fitting centrepiece for a store named after the novel. Just below the first edition sits a €275 copy of Danis Rose’s 1997 Reader’s Edition of Ulysses, now known as the “Illegal Edition” after Stephen Joyce exercised his usual vicelike grip over his grandfather’s estate and successfully sued Rose for copyright infringement. But Aisling’s favourite Ulysses is a 1935 edition illustrated by Henri Matisse. It is an extraordinary object, leather-bound, with gilt edges and a satin page marker. Matisse’s Nausicaa design is embossed in gold on the front cover, and his black and white illustrations are scattered throughout. At the time, Joyce was thrilled by the collaboration, and even asked a friend in Ireland to send Matisse copies of an illustrated weekly from Dublin, to ensure the artist was familiar with all of his Irish references. The plan was for both Joyce and Matisse to sign each of the first 1,500 copies. But Joyce only signed 250. The story goes, Aisling tells me, that Joyce noticed at some point that Matisse had based all of his illustrations on Homer’s Odyssey, suggesting that he hadn’t actually read Joyce’s novel, “and so he put down his pen”. “Of course,” she continues “we’ll never know what happened; it’s between Joyce and Matisse. But it’s a good story.” Ulysses Rare Books is a champion of good stories – of those bound in books, and of the curious myths that amass around these odd little objects.