The Joy of Joyce: Dubliners 100 Preview 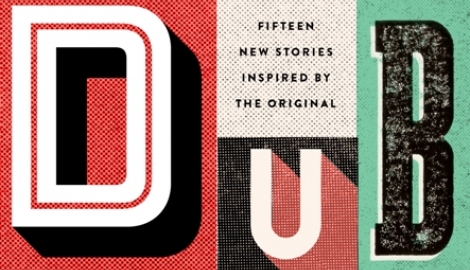 The concept is simple, and the attitude is freewheeling. On the 100th anniversary of Joyce’s Dubliners, 15 Irish authors were each asked to “cover” a story from the collection, interpreting the brief and the stories however they chose. In Dubliners 100, established authors and new voices have crafted pieces that gleefully riff on Joyce’s originals, reworking his distinctive language, evocative settings and resonant concerns against a contemporary backdrop. The collection invites rather than intimidates. Editor Thomas Morris insists that “writing is not a competitive sport, and the authors haven’t ‘taken on’ anybody”. This openness results in stories that approach a wide ranging material, and a collection that is broad and compelling. Totally Dublin spoke with contributors John Boyne, Paul Murray and Eimear McBride about the complexities of adolescence, the rhetoric of mass media, and “the spirit of the man himself”. 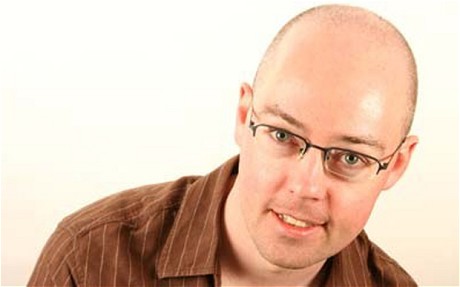 John Boyne has written nine novels for adults and four novels for younger readers. His works include The Boy in the Striped Pyjamas, The Absolutist and the forthcoming A History of Loneliness.  He covered Araby in Dubliners 100.

Your introduction for the O’Brien’s edition of Dubliners described the work as “like a concept album” in its connections and thematic unity. It seems appropriate that you’re involved with the Dubliners 100 project, which explicitly sets out to do ‘cover versions’ of stories, a term not often used in literature. What place do you think Araby has in the ‘concept’ of the collection as a whole?

The wonderful thing about Dubliners is how the stories really chart the story of a life from childhood to old age. Each one is about someone else and entirely separate but in each story we can recognize times of our lives, emotions that are universal, fears and longings that are familiar to all of us. I chose Araby because I like writing about young people – of course I have written four novels for young readers – and feel a connection to the age-group which the boy in my story belongs to. There’s a sense of wonder about the world there, a desire to belong to adult society while still being frightened by it, that I find very interesting.

Joyce critics tend to be apologetic about the narrator’s adolescent anguish, excusing this element with recourse to the narrator’s youth, folly and naïveté. I personally find this response a bit strange. Maybe these critics had deeply unremarkable teenage years, but the level of passion in Joyce’s story doesn’t seem remotely exaggerated to me. Your story brings the emotional tension to an even higher level; your narrator deals with unrequited love, discovering himself as gay, parental issues, social exclusion. What interested you about this high-emotional palette?

I completely disagree with those critics. It’s absolutely not a send-up of the narrator’s youth, it’s an absolutely heartfelt memory of being young and confused by first love. Who hasn’t experienced that emotion? As the story was being brought up to date I thought it would be interesting to make the boy gay so that he would also have to explore these unexpected, confusing and frightening feelings that were building inside himself.

Araby was a strongly autobiographical story for Joyce, right down to the house on North Richmond Street where he lived. You’ve spoken about the “quiet middle class existence” of your teenage years in a Dublin suburb, and I’m wondering how much you drew on your personal experiences of adolescence.

The setting of the story isn’t particularly resonant of where I grew up… but as a young boy coming to terms with the fact of being gay I struggled as deeply as one feels the boy in Araby is going to struggle over the years to follow. It’s incredibly difficult to feel so different from everyone else, the terror of anyone finding out leads to an emotional distortion during teenage years that can often be hard to overcome in adulthood. It’s important for young people to recognize that it’s perfectly OK to be gay; I have a real problem with novels which use the word “gay” over and over as a negative or disparaging comment. The idea of a young gay person, struggling with his sexuality, and reading a novel where “gay” is something intended to make the reader laugh depresses me. 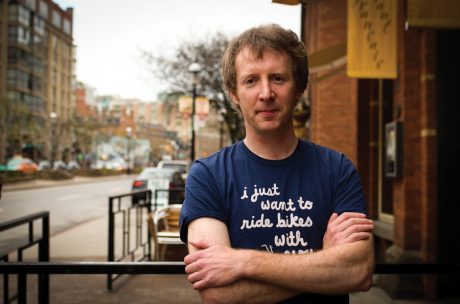 Paul Murray is the author of An Evening of Long Goodbyes and the Booker-longlisted Skippy Dies, and is working on a third novel. He covered A Painful Case in Dubliners 100.

James, the cold, distant protagonist of A Painful Case is often read allegorically, as a cautionary tale of intellectual superiority and isolation. Yet even in Joyce’s version, he is “a man ever alert to greet a redeeming instinct in others, but often disappointed”. He’s hopeful, maybe even sentimental. Do you see him as a fabular character, or can the reader have an authentic (if there is such a thing) sympathy with him?

Well, authenticity is probably the key to Joyce’s story, and James is definitely making eye contact with the world. What’s he looking for? What’s disappointing him? I think he’s very believable, and plausible. That’s probably why I connected with the story. I don’t think he’s entirely fabular, I can certainly see parts of myself in him; parts that judge, parts that lack mercy or compassion. Joyce does a terrifyingly vivid job of creating that man’s world, receding farther and farther . . .

Both yourself and Joyce are cynical of mass media’s sensationalism and manipulative impetus. Contemporary media seems so sprawling and totalitarian it’s almost impossible to escape; dissatisfaction with media’s pretensions gets re-absorbed back into that rhetoric itself. Your character writes angry restaurant reviews that are designed to puncture snobbery but become part of the machine, collecting “hits” from the punters.

I think in some ways Joyce was very much on top of the explosion of media, and its claims to truth. My story’s newspaper editor is highly manipulative. He’s the real villain, using James and his anger, getting him to say outrageous things about the Holocaust or whatever in his reviews.

So using and neutralizing his dissent. You say James realises that “if his mission was to wake the world out of its stupor, then it had failed. People just didn’t react to that kind of rhetoric”. Is there a kind of rhetoric still capable of jolting people out of complacency? Is it possible in non-fiction media – or even in art?

Reading people like David Graeber, who founded the Occupy movement, there is a lot of informative, important non-fiction out there… But still, some champagne-swilling banker can read Graeber and think it’s poppycock, yet just because I have a particular background maybe it makes sense to me. As an artist of any stripe, what you’re trying to do is momentarily remove the multicoloured, multi-headed hydra of lies and bullshit we’re engulfed in constantly. You have to just keep asking what it’s actually like to be a person, and hope that sharing that actual experience will help the reader to remember what it’s like to be a person, beyond all that. 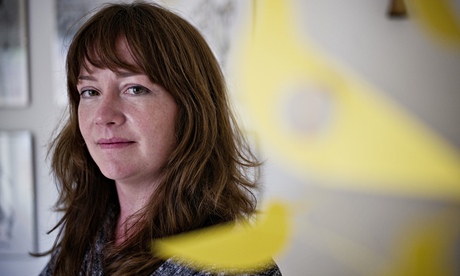 Eimear McBride’s debut novel A Girl is a Half-formed Thing won the Goldsmith’s Prize, 2013. She is currently working on her second novel. Eimear covered Ivy Day in the Committee Room in Dubliners 100.

Ivy Day in the Committee Room is one of the most explicitly political stories in Dubliners.  You’ve used a light hand with the updated political references. Did you make a conscious decision not to be too pointed?

In the original, there’s a sense that these “crossed and double men”, as you call them, slink off to start the whole bizarre cycle again. Your story posits a political dissolution . . .

I think the main difference between my ending and Joyce’s ending is that my story is doubly-cynical. At the end of Joyce’s Ivy Day, there is this moment of [the ode to Parnell] and these fine feelings. There just isn’t in mine. There’s a little limerick, a sneer, that’s it. The level of discourse, and political discourse, has been lowered so greatly, it’s all we think we’re worth anymore. No one dare ask more of themselves, or of anyone else, or take things seriously in that way.

Your novel, A Girl is a Half-Formed Thing, uses markedly experimental language. That strange, playful pre-verbal rush also comes through here – the tongue-twister about Bertie, the jazz-like improvisation and joyful rhythmic colloquialisms . . .

The base of life is the most interesting to me, and expressing that in a fuller way is the most interesting of all. Then when I re-read Ivy Day, certain words jumped out at me. There was a play on that. I thought, I’m doing a project that’s quite cheeky, “covering” Joyce. I thought, what would Joyce do? and decided to have a bit of fun with it, in the spirit of the man himself.

Dubliners 100 is published by Tramp Press on June 5th.