Against The Enamel: An Interview with Priscila Fernandes 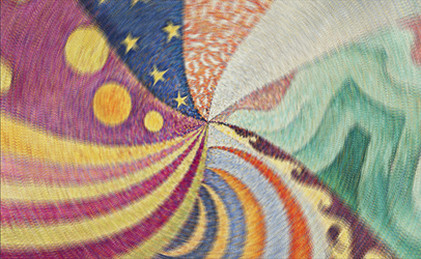 Sometimes an artwork just grabs you, and that’s exactly what happened to me aged 15 when I saw Paul Signac’s Opus 217, Against The Enamel… peering out from one of my father’s art books – it made me want to read and learn about (then eventually study) art, at an age where I knew very little about it. Almost ten years on and Priscila Fernandes is equally besotted with Signac’s polychromatic masterpiece, using it as a jumping-off point for her new solo show, Against The Enamel, at Temple Bar Gallery. In the exhibition she presents a hypnotic video piece on a huge LED screen (stand up close – the tiny dots that comprise the screen are truly mesmerising; a glorious technological rebirth of Signac’s pointillist technique), and a series of ascetic cast iron sculptures. Plaster has been peeled away to expose the original cast iron beams of Temple Bar Gallery’s industrial revolution structure, transporting us back into a world of factories, early institutional structures, didactic teaching and aspiring socialist revolutionaries. A few days ahead of opening, Priscila talked us through the works, and why she too fell in love with Signac’s captivating painting.

So how did the work in Temple Bar Gallery start off?

When I first came to visit the space, it was during Temple Bar Gallery’s 30th anniversary celebrations. Learning about the gallery’s history, I became very interested in the changes that have happened in the building – I found out it used to be a shirt-making factory, and was interested in the shift from factory space to art space, and how artists took advantage of the industrial architecture. In the 1990s, an extension was added to building – the line that now runs along the gallery floor shows the division between the original factory space and the new “art” space; there are also these original iron beams dividing the room, which I’ve exposed for the show.

I’m just looking at the dividing line between the “factory space” and the “art space” in this gallery – at the moment, you only have works in the factory space. Is the modern extension going to remain empty?

That’s left empty. I hope it becomes very clear to people when they enter the gallery that there is this division of spaces.

So how does all this link to the works here?

A lot of my research has been spent looking at 19th century children’s art books. The public education system was new at this time, emerging during the industrial revolution with the new demand for an educated workforce. These art books were designed to teach children how to draw, starting with very basic straight lines, then eventually moving onto curved lines, but all through repetition. I started to think about why they persisted in such a disciplined method of working, all based on repetition and mimicking, and realised it links back into the idea of these children being future workers – needing to be set working habits; to be disciplined and work in a factory.

So these floor sculptures – these are based on the line-making exercises in the children’s art books?

Yes, the sculptures are based on the art books. They’re made of cast iron, so they’re very heavy; we got them made in a foundry in Athy, County Wicklow. It’s a really big place that makes bits and pieces missing from industrial machines that aren’t made any more; sometimes fences; lots of crosses for cemeteries. Cast iron is so old fashioned – it’s very difficult to achieve a level of perfection with it – and it brings to mind the industrial revolution, structures like the Eiffel Tower, as well.

The video piece is based on a Paul Signac painting, Opus 217. Against the Enamel of a Background with Rhythmic with Beats and Angles, Tones, and Tints, Portrait of M. Félix Fénénon in 1890. Why did you choose to include this work?

Well the original version of the painting is a portrait, of a man holding a flower – I found it very peculiar and became curious. It’s a portrait of Félix Fénénon, an art critic, curator, gallerist and anarchist who was imprisoned for taking part in some anarchist protests in France. Signac was also an anarcho-communist, and saw painting as a political agency; he was making lots of propaganda paintings at this time, to convey the ideals of an anarcho-communist utopia. In a way the work could be seen as the explosion of anarchism – the moment of revolution, frozen in time. But you could also see it as being a spectacle of stimulus.

Signac was very interested in how colours and shapes can affect you, and how they can move you. He worked with the scientist Charles Henry, who was very interested in the psychological and physiological effects of colour and shapes – trying to be very rational in deciphering what it is that makes you move, and get up, and start a revolution. He puts all this together in a very symbolic manner, but also a very didactic manner – there’s something very didactic about the work, even child-like, with these stars and planets …

Then the other thing that interested me is that Signac argues for painting in “dots” rather than brushstrokes. It’s a stand against virtuoso-ism, because when you make a brushstroke, there’s room to be very fascinated by your own movements. He wanted it to be very rational.

It’s very funny that he’s negating all this – the sanctity of the brushstroke – before the emergence of Abstract Expressionism, and those huge canvases of gestural marks. It’s like he’s rejecting it before it’s even happened. But I guess Impressionism was very brushstroke-based … and very romantic.

Oh, Impressionism was, yes. Signac had this theory that Impressionism was failing because they still weren’t rational – they were interested in scientific aspects like colour and light, but they were still addicted to the brushstroke. Whereas Signac believed that to make a good anarchist painting you also needed to be very rational. This is also the era in which chemistry became a popular science – discoveries about the atom and the molecule were being made – and that influenced thought on the individual’s position in society. There’s a very symbolic element to Signac’s painting – you could see each single dot as an atom, that when put together, becomes a society.

There’s really a lot in neo-Impressionism to delve into. The fascination with optics and science is well studied, but not as many people know about this political agency.

Before I came here I read an interview that you did with Niall de Buitlear for Circa in around 2006. Towards the end, you begin talking about the Neo-Impressionists and their fascination with optics and science, so it’s kind of interesting that you’ve come full circle.

Yeah, I think in that sense I always identified with the Neo-Impressionists, and their idea of going against virtuoso-ism. But then there are other parts of their practice that I respect but don’t identify with. Like this very assumed political attitude – this need of making a painting that will make you move and protest. That, I find more difficult. I find it hard to position myself in such a clear ground.

I think it’s a very typically 19th century idea, though – to have a painting that will inspire social change, or revolution. Like, Courbet and his Stonebreakers, and how he wanted it to inspire a socialist movement. It’s interesting that they thought painting could do that, if a little naïve.

Yes, but then the research the Neo-Impressionists did about the psychological effects of colour and shape is still used nowadays. It’s used in advertising, and in science. It’s become part of the way we visually communicate.

Against the Enamel by Priscila Fernandes runs at Temple Bar Gallery & Studios until March 29.