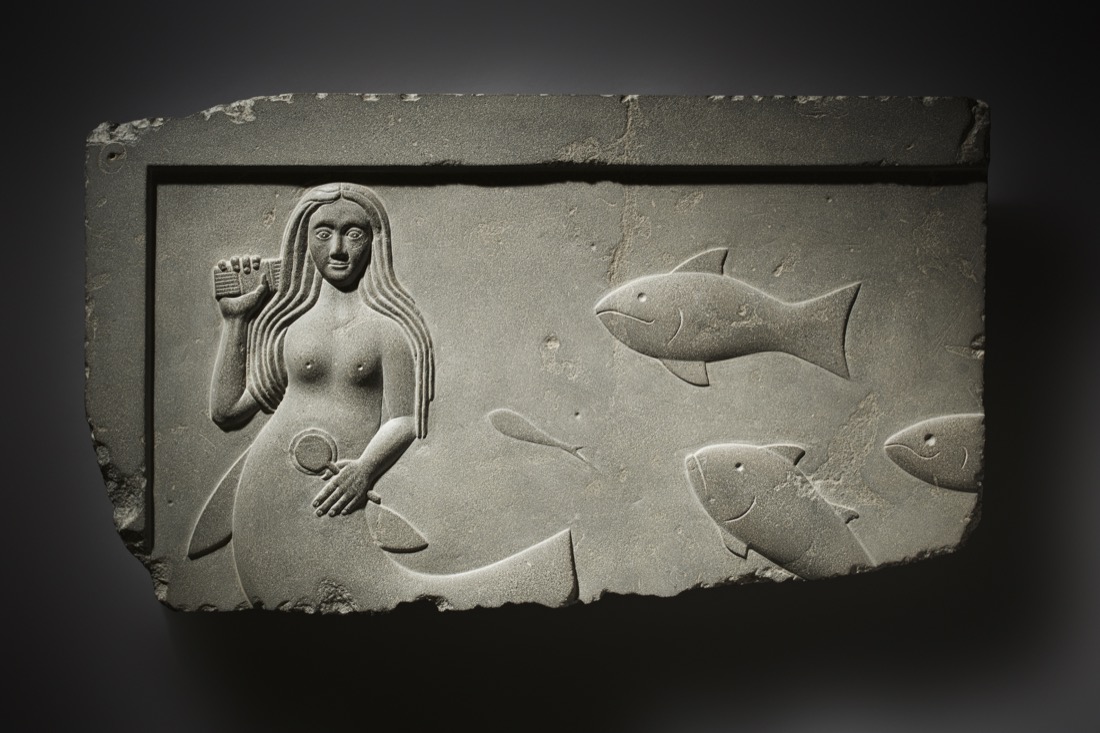 The former antique restorer turned stone sculptor, Jason Ellis, draws on his experience as a conservationist to realise, and genuflect towards, renowned stone reliefs from art history in his latest exhibition.

“Nothing is easy with stone and that’s part of the challenge, part of the pleasure. It’s getting something out of a material that is very intractable.”

Jason Ellis received rave reviews with his last exhibition Old Anatomy – a series of stone carvings modelled on various organs. But there was one problem; nothing was selling.

“You could say Oliver [Sears, gallery owner] gave me a very long leash to hang myself with!” Ellis laughs. “Not even the medical fraternity bought them. My wife said to me ‘who’s gonna put a pair of lungs on their fucking mantelpiece?’ And she was right!”

Ellis’ latest show, Simulacra, is a more palpable proposition for someone’s sitting room, although no less compelling. It’s a series of stone relief carvings, predominantly modeled off some of the greatest ancient work in the world.

Ellis began as an antique restorer in the late eighties, working with furniture and ceramics before moving to renowned art restoration firm Plowden and Smith in ‘91. It was here that he started working with stone. Ellis calls it the perfect match.

When asked why he enjoys the medium of stone, Ellis calls it “unforgiving.” It might seem strange for someone to love something because of its severe qualities, but that’s very much the attraction for Ellis.

“There’s a Danish sculpturer, Robert Jacobsen, who said that ‘the material repays in inspiration what you have given it in your attempt to serve it.’ Stone doesn’t want to be tamed. It’s the opposite of clay, which will just move wherever. You go more cautiously. Nothing is easy with stone and that’s part of the challenge, part of the pleasure. It’s getting something out of a material that is very intractable.”

A lot of Ellis’ work is fueled by a desire to push himself. He’d be the first to admit that Simulacra initially came from a simple urge to develop his skills.

“[This exhibition] started off as an exercise for myself, a kind of technical challenge. I wanted to learn how to carve in relief. All my work till now has been three dimensional pieces and this is a whole different skill. People have described it as drawing in stone. For example, the lioness is only 3.5 millimetres deep. If you put a flat white light straight on it, you’d hardly see anything.”

When you step closer to Ellis’ work, it’s immediately apparent what painstaking work was involved. The ripple of fabric is rendered by infinitely small grooves in the stone. Muscle and collar bones are formed with heightened ridges. All round, the anatomy work is stunning. Ellis immaculately captures the creases on someone’s stomach, or the way in which muscles pull taut against skin. This is particularly noticeable in Vesuvius, one of two pieces in the exhibition not based on existing works.

When Oliver Sears expressed an interest in doing a show of Ellis’ relief carvings, Ellis immersed himself in research, which spanned from Egyptian and Irish Medieval sculptures to Donatello and The Greeks. He visited the collections in the V&A and spent a week going through the Louvre’s antiquity rooms (of which he estimates he took 1,200 reference photographs).

He speaks about the great artisan stone carvers with great admiration, a strong contrast to the “post-object art world” he finds himself in now. “Every time I go to a modern art show, or a conceptual art show, I always walk away feeling disappointed. I feel if you have to explain your work then you’re doing something wrong in the first place.”

In a way, Simulacra is very much a response to those trends. By recreating these works, Ellis wants to highlight the beauty of the originals. If someone wants to investigate Donatello after viewing the exhibition, he’ll consider it a success. “I just want people to look at the object and either admire the skill or enjoy what it’s portraying. I’m very old fashioned in my approach, almost anti-conceptual.

“The whole thing of art needing a backstory, the artist’s biography… It’s just me, me, me all the time. And it’s anathema to me. I’d much rather it be the art. In a way I’m the artisan, and I quite like that. These works are really subjugating the artist. They’re not about me, they’re about the medium.”

In his bid to emulate classic works and remove himself from the exhibition, Simulacra runs the risk of being a hollow, albeit stunningly rendered imitation of the past. But while most of the pieces are recreations, they’re all fragments, specific elements of the work that Ellis has chosen to reproduce.

There’s the unsettling offering of a rabbit to ravenous dogs, the dying moments of an impaled lioness, the disgust of one of King Herod’s companions as he’s shown the head of John the Baptist. Athenian, which features the disembodied feet of galloping horses, plays like an ironic depiction of the rise and fall of Ancient Greece. Meanwhile Vesuvius depicts a man staring out of the frame, oblivious to the imminent eruption of the volcano behind him.

But these ominous pieces are balanced by moments that emphasise tenderness and intimacy. Pazzi Madonna hones in on the child Christ reaching up to his mother’s face, while Ministering Angel I &II focus on the hands of the Angels as they lift Jesus off of the cross.

Ellis has drawn on his experience as a conservationist to age each piece, reverse engineering the imperfections that he spent 20 years trying to rectify. He says this is partly to get around his own shortcomings as a carver, but they add an undeniable melancholy edge to the pieces, like they’ve been abandoned by the steady march of time. The armchair psychologist would suggest this is not dissimilar to the way Ellis perceives stone carving as being abandoned by the larger art world.

Each piece is fitted on a painted frame to add a little colour and make the pieces more digestible for potential buyers. It’s frankly refreshing to hear Ellis speak so candidly about the commercial elements of his work when so many artists and gallerists feel the need to equivocate the issue.  Ellis just shrugs his shoulders.

“You’re always in the position of some compromise if you’re working with a commercial gallery. Oliver has to pay the bills. We’ve found a happy medium though. I’m allowed freedom to do different things, strands that run in a parallel, in a way. And, I find it’s maybe disingenuous for artists to not be talking about the commercial angle. At the end of the day they all want to sell their fucking work!”