Artsdesk: Quiet At The Back! Mandy O’Neill 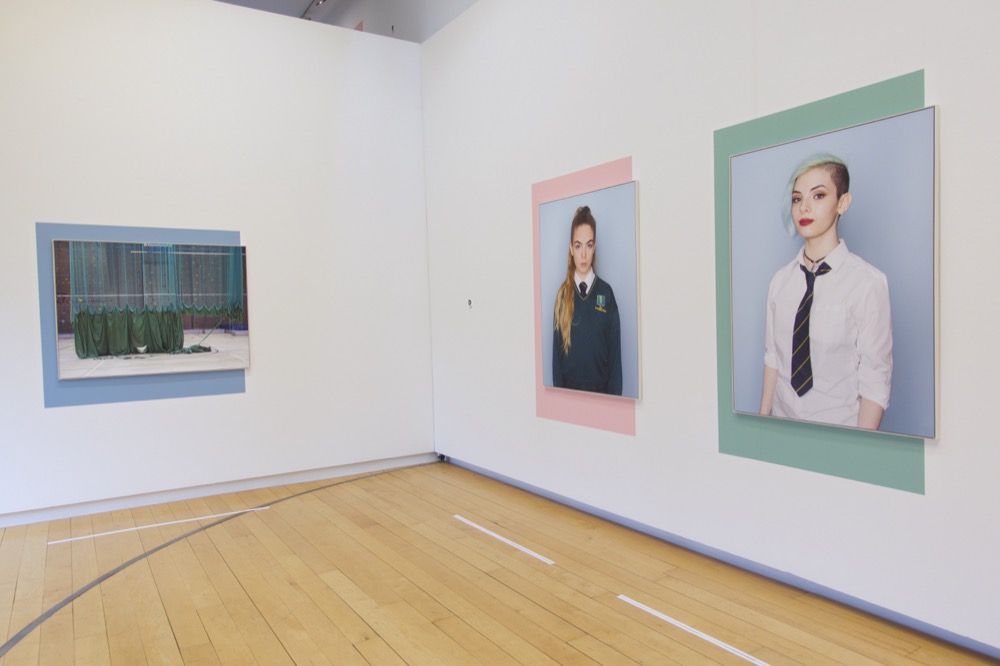 Mandy O’Neill went back to school to document the lives of students.

When we think about our school photos, we think of stiff smiles, rigid postures, a certain tension in the eyes that suggest someone’s holding us at gunpoint just off-camera. These photos usually don’t have much use except to mark the passage of time, or to embarrass the subject whenever their friends or partners are visiting home.

The portraits in Mandy O’Neill’s new photography exhibition Quiet at the Back, could not be more different. Taken over a four-year period in different schools in Dublin, O’Neill has captured stark images of children going to school in the midst of austerity measures. The children are at ease in the pictures, but there’s a defiance in their expressions that make the images deeply affecting.

The work initially began back in 2004 as O’Neill’s final year project as a mature student in DIT. Reaching out to ten different schools from various demographics, she sent questionnaires out to the students asking them about their hopes and dreams, with the intent of combining them with portraits of the children. When O’Neill started taking pictures of the students in their uniforms, she realized she’d hit a rich vein.

“It made me think about my relationship to school and my own educational background,” O’Neill says. “When I left school in the 80s, I didn’t go to college, it just wasn’t an option. With my background, there was no real understanding of the value of education, even though I probably would have liked to. 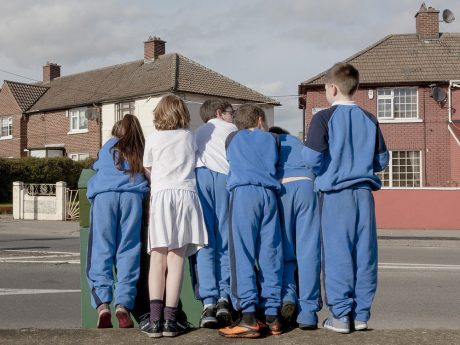 “When I got the responses back from the questionnaires, I was shocked by the difference between, say, a school in south county Dublin and the school I went to in terms of the expectations and aspirations of the children. It was really stark and it just got me thinking again about the levels of inequality that’s played out in the school system.”

After she graduated, O’Neill tried to photograph students in a school from every district in Dublin, but the project quickly became too unwieldy. For the next five years, the idea lingered in the back of her mind. It was only in 2012 that she returned to it after spying Gaelscoil Bharra at the end of her road in Cabra. For O’Neill the decision was instinctual, rather than calculated.

Gaelscoil Bharra had been operating out of prefabs for 20 years by the time O’Neill started to document the students. In that time, every successive Taoiseach had promised the school proper facilities. When O’Neill began, the idea was to document Gaelscoil Bharra’s final year in the prefabs before construction began. But the buildings didn’t materialize for another four years.

O’Neill would visit the school up to two days a week, sitting in on classes and wandering around the grounds taking pictures. She even accompanied the students on school trips. After the first year, she felt like she’d barely gotten started. “It really does take time in these places for people to get to know you and trust you, even for the kids. A lot of the work didn’t make it into any kind of project, but it was important to do it.” 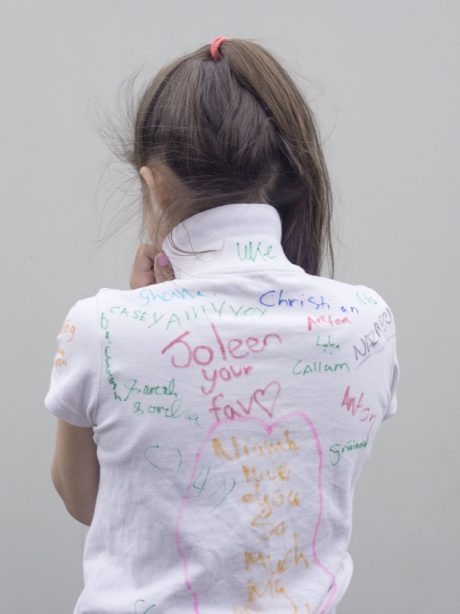 In addition to Gaelscoill Bharra, O’Neill started taking photographs in Larkin Community College just off Cathal Brugha Street. She began by taking candid pictures of the students on their break but found the photographs somewhat invasive, preferring to sit in on classes.

“Very much with the older kids, they just did not want to be photographed at all,” she says. “So, I just told them why I was there and asked them how they felt about it and if they said no, I just sat in there. It was still valuable to me as a litmus test of the vibe in the place. There’s a lot of unhappiness with the system. The whole thing is just gearing them towards exams rather than learning.”

Eventually the students started to feel comfortable around O’Neill. Some of the most striking images in the gallery are of the students simply being, such as a photograph of Gaelscoil Bharra children all huddled in a group, laughing and talking. Even the striking portraits were grabbed in a two-minute window with each child outside the classroom.

“On either side of those unsmiling, direct photos, there’s a lot hilarity and laughing. It’s almost like you’ve got that one second to capture them not laughing,” she says. “And I suppose people would question that, but that’s what I was looking for.”

When asked why she sought more somber expressions, O’Neill talks about their enigmatic quality. “With a smile, the interpretation is shut down to a degree, because that’s what we expect from a photograph, the classic school photo. And I don’t select photos where I think they look too vulnerable or sad. I’m trying to show strength. I like them to look questioning, as if they’re asking the system that informs their future ‘well, what are you going to do for me?’”

The photographs are a lesson in minimalism. The Ghaelscoill Bharra portraits are taken with natural sunlight, while the Larkin Community College photographs are evenly lit against a wall. O’Neill tried more active and experimental styles, but she was constantly drawn back to a more simplistic approach. 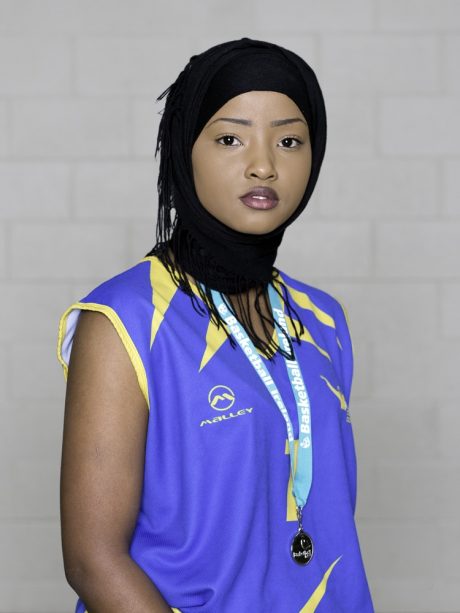 “While they’re very pared down, it’s in the details for me. For example, in the portrait of Anna, the jumper, the bobbles on the jumper, it just captures that whole end of school thing, where the jumper’s too small for you and you’re definitely not getting a new one. And the eyebrows speak to certain cultural things.”

Many of the portraits in the exhibition are placed next to images of different parts of the schools, from the gymnasiums to the school garden. These photographs emphasize the sharp, perpendicular lines of the rooms, such as a line of lockers, or the corner of an old sofa in the 6th year common room. These environments seem oppressive when placed next to the vital portraits, almost like specters hanging over the students. But O’Neill doesn’t see it this way.

“I exhibited just the portraits before, particularly the Gaelscoil stuff, and in some ways I think they’re almost too intense. The environmental images give them a bit of a pause. And I don’t really think they’re oppressive. For example, there’s the image of the polytunnel, through which you can see the prefabs. To me, that’s a happy image, because I’ve spent so much time in the gardens and it was such a happy place.” 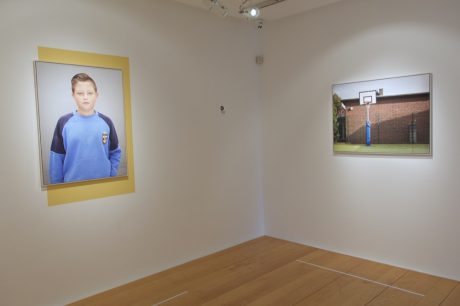 Here she pauses. “But again. The environments can be oppressive, so… It is beautiful, but it can’t be too beautiful. It has to speak to the environments.”

It’s been a long journey for O’Neill, and now that this chapter has come to a close, she feels a certain degree of relief. Over four years, she stockpiled thousands of images, often uncertain of what the end result would be. What kept her going when she was in the thick of it? 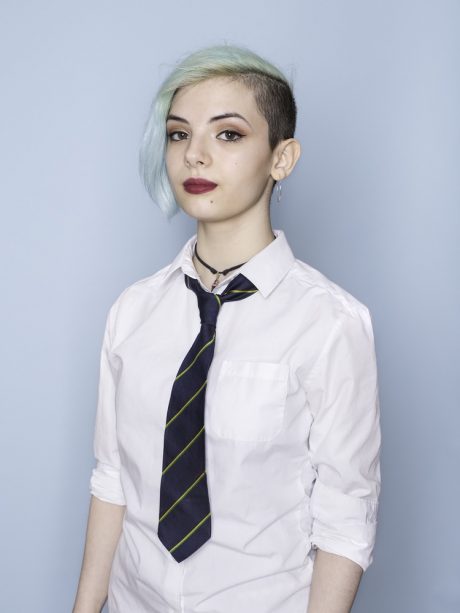 “There’s something about getting the exact portrait. It’s an intangible thing. I don’t know, it makes me happy which sounds daft, but there’s something beautiful in it. And I think the social and political context behind it is so important. The ideas about how we live today are very much ingrained in the work.”

Mandy O’Neill’s residency at Larkin Community College was supported by An Chomhairle Ealaíon/The Arts Council of Ireland’s Young People, Children and Education Bursary Awards, 2017-2019. Mandy O’Neill would also like to acknowledge the support of Larkin Community College, Gaelscoil Bharra, Gallery of Photography and The Digital Hub. This project is also funded by the Government under the North East Inner City Initiative.