Artsdesk – Peter Doyle No Guru, No Method, No Teacher 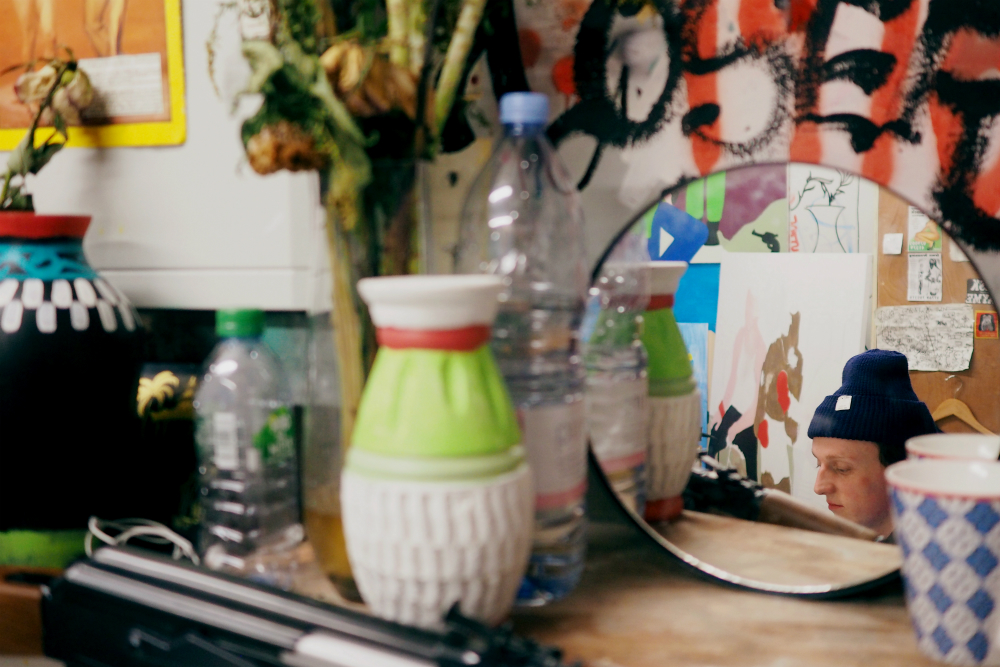 From a modest studio nestled in the shadow of the Smithfield Fruit and Vegetable Market, Peter Doyle is making art. Totally Dublin met him there to get a better sense of the experience of a young artist without formal training, and to gain some direct insight into the work he creates and the process behind it.

On the origins of his interest in pursuing art professionally, Doyle keeps it in the family. “My mam, my dad and my sister were all artists. My mam was a photographer, my dad was a painter, and my sister was the same as him. Art was always something I wanted to do. When I left school I wanted to do graphic design, but I was terrible at it. I just started taking photographs on film, and then I found myself drawing them. Then I was like, ‘they look good – why not put them onto something huge?’ and it started from there. 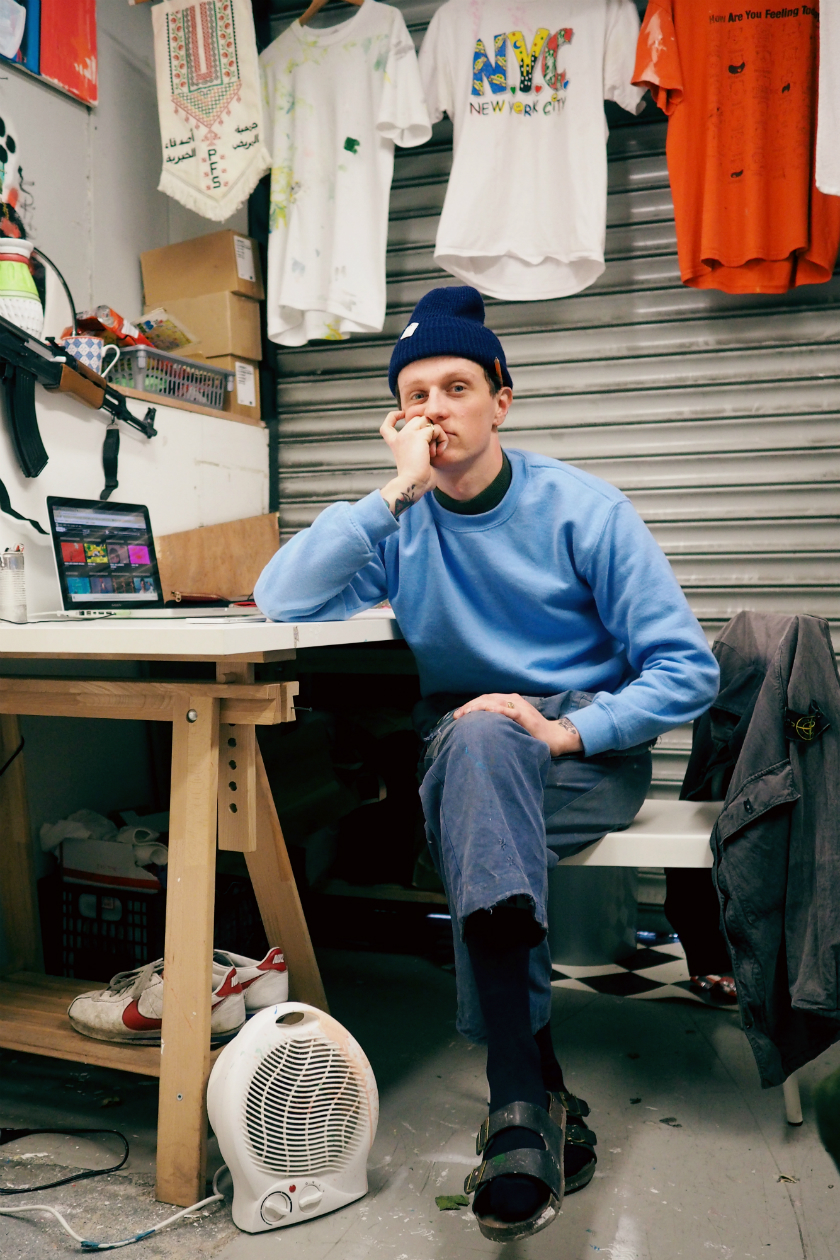 Although he had wanted to attend the NCAD, Doyle never got in. In the context of his own practice, he recognises the benefits of a formal education. “If I went to art college, I know I would be able to conceptualise stuff more and develop a technique, compared to now where I just go to a canvas with a pencil or try to draw something off my phone that I’ve taken a photo of”. That said, he is no longer hung up about not getting in. And although it’s impossible to prove, perhaps he never really needed to. “If I went to college I don’t think I would doing the kind of stuff I’m doing now. I think I would have been brought down a different route. If I learned more stuff, it would probably have taken me in a different direction”. It is impossible to say whether that different direction would offer Doyle the same fulfillment he currently derives from his art, or the same buzz generated around it by his peers. But it might not have. “Hopefully there’s a new wave of people thinking that they don’t have to go to art college. People think it’s the be-all and end-all. I know fucking tens of people who are doing so well and who haven’t gone to art college”. We move to talk about his work.

On immediate inspection, Doyle’s canvases appear charming in their formal naivety. It is only after the viewer’s gaze has been left to linger that something else, a subtle feeling of something slightly askew, becomes more apparent. Closer examination reveals a more or less abstract current of darkness running through each work, betraying the tangibly brilliant and positive colour palette. It is a darkness to be found in an unsettling sense of emptiness or quietness, in a reference to violence, or in Doyle’s population of faceless humanoid figures. It is a surreal and sinister tension. How does Doyle achieve this? “I’m really bad at trying to describe what I do. I imagine a scene, a story – but only I know the story – and try and bring that on to a canvas. And, I want people to have their own interpretation of [it], even if they think it’s stupid. I want people to look at it and go, ‘Oh, it’s so literal’. But you can read whatever you want into it too”.

For someone so quickly dismissive of their own capabilities as a graphic designer, there is an undeniable graphic quality across form and colour in Doyle’s work. “I wouldn’t be classically talented at drawing but I can do a shape, you know? I look at people a lot – how they sit, how they move, their mannerisms. I’ll either take a photograph of them or just look at them long enough so I remember it. I just start from a basic outline before going into it”. And the colour? “[That] just came. I found it so nice to make someone’s skin so vibrantly pink, for example, although it might have this story behind it that actually makes it quite dark. It just appealed to me”. As Doyle continues to practice, however, colour is catching up with content without diminishing the effect of juxtaposition, “I’m starting to simplify them more now. I’m painting a little bit darker but, from the beginning, I wanted to have something quite bright on a potentially sinister story”.

There are people, untrained and trained, who I bring in to the studio and ask what they like or don’t like about a work. My favourite [thing] is getting opinions from people, like me, who are untrained [and say], ‘I like the way this is doing that’ or ‘Why the fuck is that there? Get rid of it’. This is what I would rather hear than some abstract opinion because I don’t always know what I’m doing – I just enjoy it.” And, pending peer approval, is a work ever finished? “There are some that are finished to me, but I do often come back. I’ve had pieces for a long time and would continually return to them. And I scrap a lot of it. I’ve painted over every single one of these”. He gestures to no work in particular. 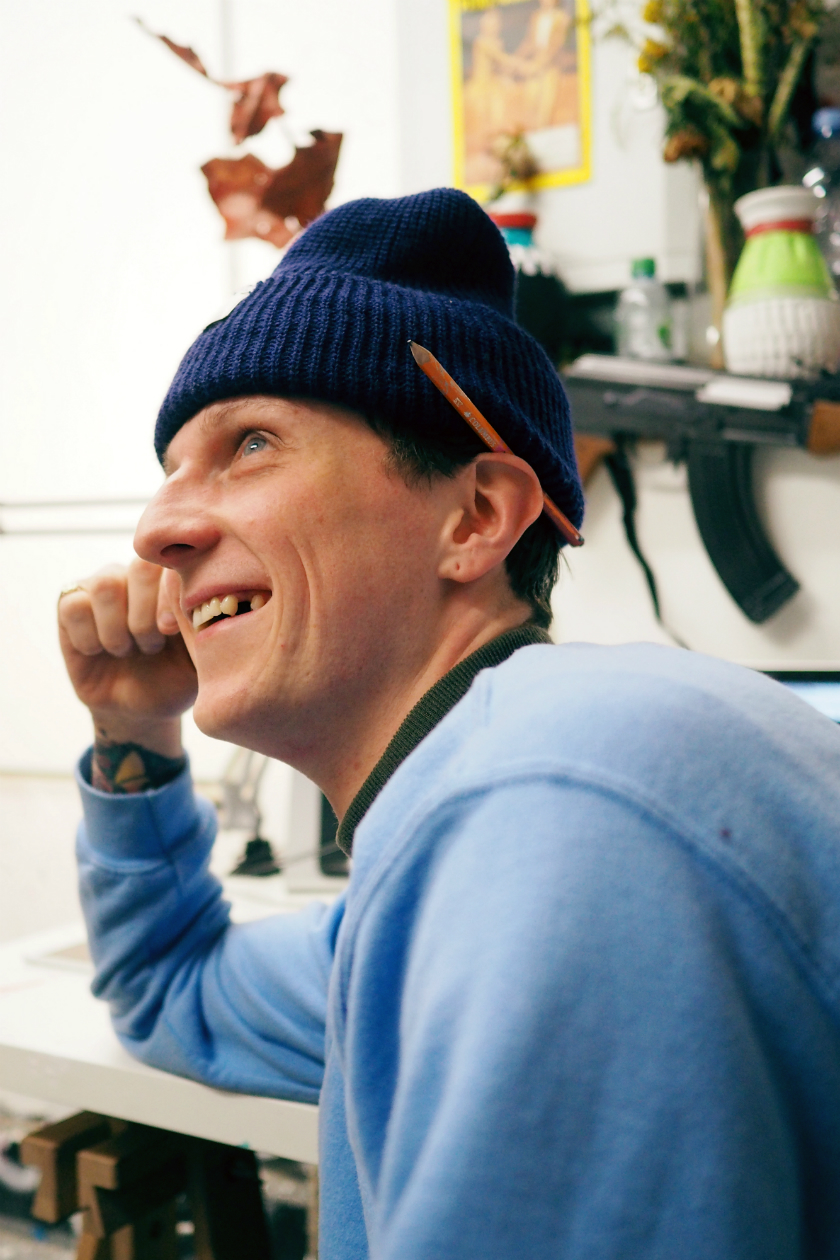 To believe Doyle – and it is very hard not to, such is his sincerity – 2017 will be good to him. He cites interest from commercial galleries in London, and from an unnamed individual in one of this island’s own key art institutions. Doyle is typically low-key about what is, ostensibly, an important development. “I’m not really looking into any of that at the moment. But it’s nice to have people look at you and say, ‘I’m keeping an eye on you’”. In the interim, publicising his work beyond his Instagram account takes priority, with an exhibition in development. Themed, and billed for a time unspecified in February, it will be a collaborative affair with Kevin Flynn, an artist in NCAD. Doyle describes Flynn’s own work as “crazy realistic” and looks forward to seeing how that contrast in approach plays out in situ. It will also be interesting to see the difference, if it can be said to exist at all, between someone with formal training compared to someone without, and what this might mean for how one artist is appraised in light of the other.

Doyle emphasises the importance of this kind of collaboration, particularly amongst those starting out. Arguably it is essential to sustaining Dublin’s creative communities. For Doyle, this coming together is relatively recent, and his insight in this regard seems like a good concluding point. “Dublin, three or four years ago, wasn’t like this. People aren’t trying to outdo each other or undercut each other anymore. They’re on the same wavelength and there’s a lot less negativity towards people – just enjoy it”. For Doyle, who makes art very much on his own terms as he explores his self as an artist, this is precisely what he is doing. And it is paying off.

You can find a selection of Peter’s paintings at @petrdoyle on Instagram.