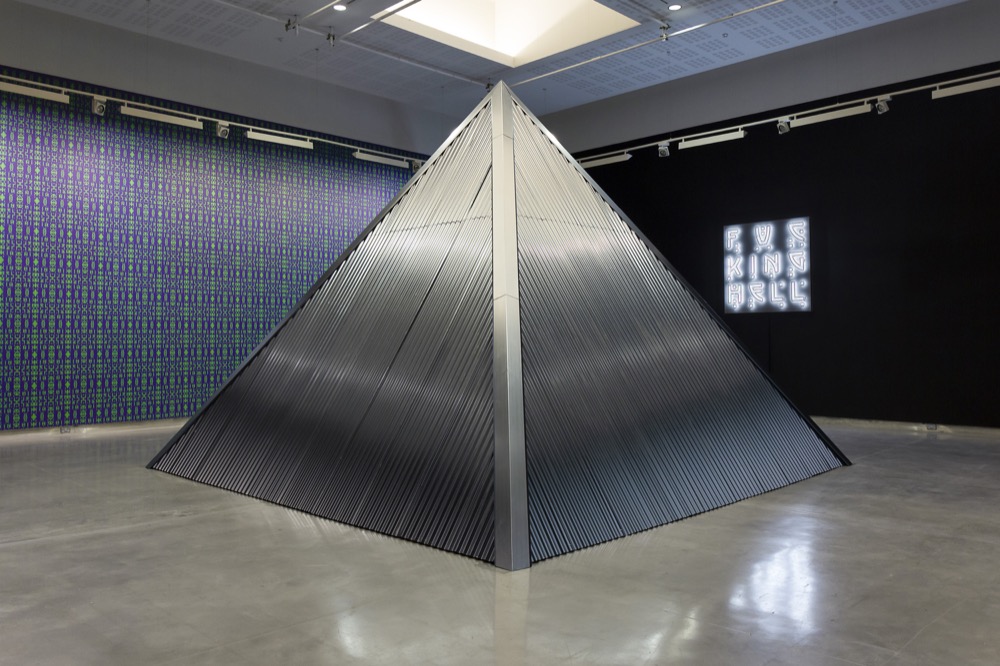 A séance with William Butler Yeats at the Hellfire Club inform the latest work by Kendell Geers.

“A lot of artists have let go. They’ve sold their right to be an artist to the highest bidder. Art has a transformative power, but it’s being used to transform bank accounts rather than transforming consciousness.”

The day I meet Kendell Geers also happens to be the birthday of William Butler Yeats. That’s a fitting coincidence when you consider the inception for Geers’ new exhibition came from a séance he had with the man himself. Of course if you asked Geers, he’d laugh and tell you there’s no such thing as coincidence.

Created in collaboration with a/political and Rua Red, The Second Coming features a huge iron pyramid, green and blue wall paper containing dense hieroglyphics and a white neon sign proclaiming “Fucking Hell”. When you walk into the room for the first time, you can’t help but think something similar.

The exhibition marks the fifth collaboration between a/political and Rua Red in their two year partnership. When South African artist Kendell Geers became available to work on a new exhibition, it was important that he came to Tallaght to consider the local context.

“It’s always been important to us and a/political that the artist spends time here and makes work that relates very much to this place,” says Rua Red’s Executive Director, Maolíosa Boyle. “It’s about spending time with the people, understanding the place and creating a response to that. One of the things we thought Kendell would be interested in was the Hellfire Club.”

Geers has harboured an interest in Magick and the mystic artists since his teenager years, so he leapt at the opportunity to visit the Hellfire Club, a place known for all kinds of debauchery and occult practices in the 18th Century. On the night that he and members of a/political and Rua Red visited Montpellier Hill, he claims to have communicated with Yeats.

“We all have the ability to experience more than three dimensions and five senses,” Geers says. “You basically need to slow down your expectations, your consciousness, to the point where you tune in to another way of seeing and hearing. 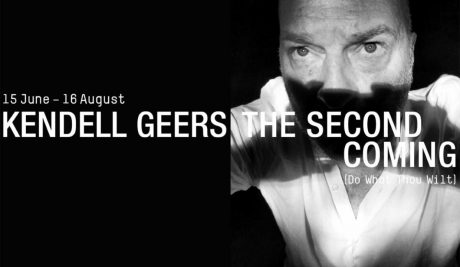 “At some point if you tune in, it’s like a bolt of lightning, it just descends on you,” he continues. “I don’t know how long it was for, but time disappears and it only feels like a second. I came out of the lodge completely disorientated and everyone saw me looking a little disheveled. I just said ‘I can’t talk about it! I need time to digest what just happened!’”

Eventually Geers realised what his experience meant; he needed to set up a new temple, a “second coming” of the Hellfire Club in Tallaght. The exhibition has many layers, but at its core, it is designed to be a symbol of hope that interrogates the basic assumptions we make in our day to day lives.

“The shopping mall has been installed in all these places as centres to give you hope,” he continues. “But this is a false hope, an unsustainable one based on raping the resources around the planet. It’s filled with things that don’t come from this area, but in Chinese sweatshops so we will all look the same.”

Third World Disorder – the pyramid at the centre of the exhibition – is a hierarchal structure, based on the brutalist architecture of the shopping centre across the road from Rua Red. But if you walk around it, there’s an entrance that allows you to travel through the interior until you reach the core, a room covered with mirrors. In the centre of the room stands a single candle, reflected into infinity on either side

If the pyramid represents the structures that make life so simultaneously draining, hopeless and apocalyptic, then the candle represents a hope that breeds untold possibilities in the infinity mirror. Standing in the centre of the pyramid as both the candle’s light and your own image reproduce themselves into infinity is a surprisingly moving and meditative experience.

Beside the pyramid is The Fall, the aforementioned neon sign that’s inspired by the two biblical falls; that of Adam and Eve, and of Lucifer, the rebel angel who was cast out of heaven. Geers considers him the “patron saint” of the exhibition. “Lucifer was the one who dared speak back, who challenged authority. That’s what artists are not doing today.”

“One of the things that’s happened is a lot of artists have let go. They’ve sold their right to be an artist to the highest bidder,” he says. “Art has a transformative power, but it’s being used to transform bank accounts rather than transforming consciousness.”

Throughout the entire exhibition, Geers plays with language and symbols to create multiple, sometimes subconscious interpretations. He wears his influences on his sleeve: Language is a Virus takes its name from a William Burroughs quote. That work, which covers two sides of the gallery, mirrors the phrase “Fucking Hell” four times until it creates new visual archetypes like the Cross of Lorraine or the vagina dentata.

On another side of the room, he’s painted the mirror image of Evil on the wall, spelling livE. It’s not subtle, but it’s effective: Geers wants people to consider whether their lives are contributing to the market forces that are corrupting our planet. 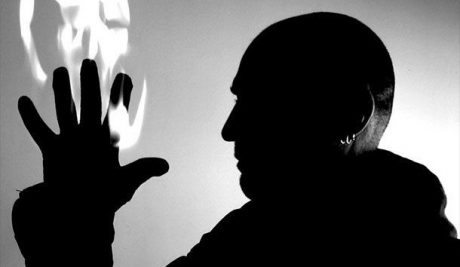 Of course the exhibition is also a visual delight, employing afro-futuristic design to create a wonderful combination of sights that work seamlessly with one another. On its opening night, people are constantly taking pictures, and everyone gets giddy as they take their shoes off to enter the infinity mirror at the heart of the pyramid.

Geers is more than happy with this response, and is excited for his work to create any kind of engagement or dialogue. “I believe everyone has a democratic right to refuse or enter [into the exhibition] at whatever level they want to. So for some people, they’re going to see a shiny pyramid and nice pretty wallpaper, and there’s absolutely nothing wrong with that.

“But if you want, you can go through the layers of initiation and actually have an embodied experience. And that is a very deeply spiritual and profound experience of who you might be.

The Second Coming (Do What Thou Wilt) by Kendell Geers and curated by Sylwia Serafinowicz, a/political run at Rua Red until August 16.