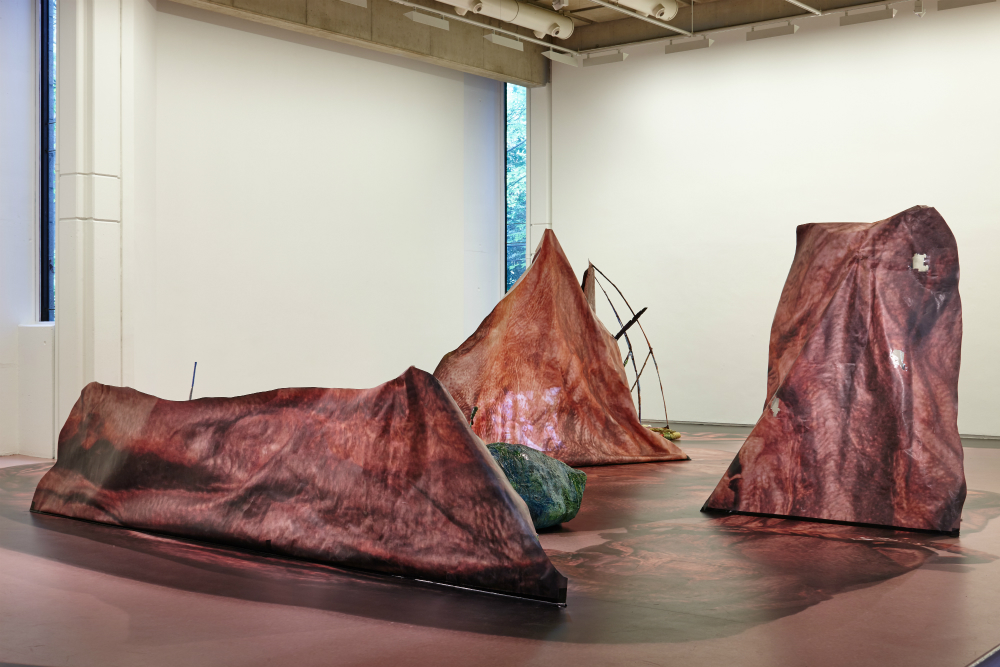 Sam Keogh’s Four Fold refers to an elaboration on the ‘threefold death’ supposedly inflicted on the Croghan man, a ritual sacrifice involving the delivery of three mortal wounds. Perhaps the fourth fold, then, is the exhumation, exhibition and representation of his remains, an idea that Keogh expounds upon in a playful, personal and reflexive way, raising flaps of vinyl skin like half-teepees embellished with image collages and disembodied hands from the hitherto flat print of the Croghan corpse that spans the entire floor of the gallery. Keogh’s idiosyncratic, bricolage style bears sharp contrast with the mottled, almost banal feeling of the archaeological remains, but in this disparity is revealed a truth. The Croghan Man, the Gebelein Man, the Baronstown West Man: these forms are named, examined and exhibited as generalities, or archetypes, a fact made possible by the shrivelling away of the subjective and the absence of memory, in his reassertion of both of which the artist calls into question not just what or how much we learn of our past by looking back, but what we can learn of our present selves in that petrified instant of self-observation.

A performance video, taken by a camera attached to the artist’s chest, is projected onto the lower half of one of the larger sections of skin. Keogh delivers an energetic and fragmented monologue, taking in subjects as diverse as the Galapagos Island turtles (the exhibition also contains a life-size replica of one of their shells, pockmarked, decaying and hot with colour), the Alien franchise, police violence and the Phantom Zone of Superman mythology. His digressions are centred around past experiences in museums of the preserved remains of ancient bodies, in particular the virtual autopsy of the Gebelien Man in the British Museum: an extremely detailed, computer-generated autopsy simulation by which one can rend apart, examine and piece back together a representation of the remains with the use of a touch-screen. The intricate detail of the simulation is owed to computerised tomography (CT) scanning, a magnetic, non-invasive procedure utilised due to the extreme fragility of its object. The remains lie unimpressive and encased in glass, feet away from their on-screen, virtual dissection. The image, Keogh observes, ‘contains more truth than its referent’.

However, it is the image constituted by the entire scene — the showcased corpse, its living observers, those operators of the touch-screen autopsy, the museum setting itself — that is the object of the exhibition’s focus. By the rendering of the simulacrum-corpse quite literally as a site for projection and often incongruous embellishment, the reflexive nature of observation is foregrounded, exposing the dialectic of the gaze that had remained hidden behind the sterile masks of historical anthropology, preservation and posterity. Just as these artefacts have become archetypal repositories for the projections of present day historical interest, as well as virtualised objects of invasion and fragmentation, so too have they perversely been rendered sacred. Keogh recalls being reprimanded as a teenager for trying to take a photo of what remains of the Baronstown West Man (‘like bits of All-Bran at the side of the bowl’), by a security guard who begged ‘respect for the dead’. He was, however, permitted to sketch a picture.

Technology’s role as both mediator and mitigator of violence is of central concern to the artist. However, it is the way in which technology has become a shaping force in our conception of realities both immediate and historical that yields the exhibition’s most provocative questions. In a world where our understanding of humanity and of history is always already mediated by the technological, reduced to the stagnant domain of representation, what are the implications for the image, memory, and the work of art? Keogh stages a dreamlike exhumation and autopsy of exhumation and autopsy themselves, laying bare the primary significance of medium and process in the production of knowledge, and challenging the sterile, scientific gaze to which we continue to subject human life and history, thus reclaiming truth from the realm of certainty.

Four Fold is exhibited in Gallery 1 of the Douglas Hyde Gallery in Trinity College until Wednesday 22nd July.