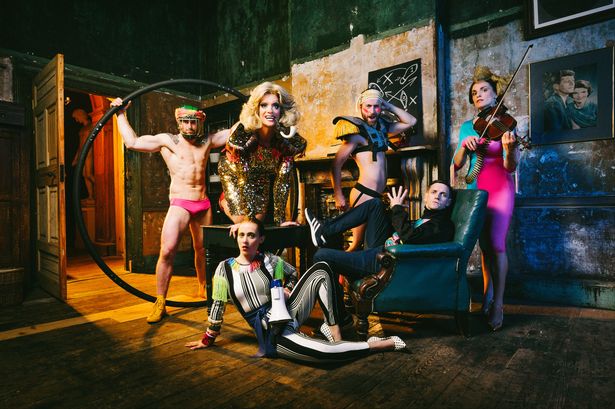 After ten years of dazzling audiences around the world with their explosive blend of theatre, dance, comedy, circus, drag and more, THISISPOPBABY are bringing RIOT, “their most entertaining show to date,” to this year’s Tiger Dublin Fringe.

Co-director of the company, Jenny Jennings, explains that the Fringe show is an extension of the company’s occasional performance and art club WERK. “We wanted to explore what would it look like if we took this impromptu, very powerful but very fun theatrical clubbing, performance art, design explosion and made a show out of it. It was always called RIOT, so the context emerged that it was about the artist as the revolutionary. I guess it’s also our response to the centenary of 1916 as well, just by dint of it actually happening in 2016.”

“It’s about really pushing the variety form as well. I really felt like we could bring something more to the table by doing what we do, which is rooted in theatre. It’s rooted in writing and performance and ideas. It would be some kind of socio-political response to the world around us, which is what the WERKs always were, they were a response to a moment in the city and in the country and in the world. So we talk a lot about bringing the audience on a journey, through resistance, through to dreaming. We’re also very much inspired by the literary and theatrical canon that is ours as Irish people.”

Innovation happens on many levels with THISISPOPBABY. “In terms of form, we’re really breaking up the notion of a kind of on-off performance bit, which is what WERK had and what most variety shows have. So we have lots of ensemble moments, we have pieces overlapping other pieces, and we’re working a lot on the transitions, utilising lots of the space and so on.”

“In terms of content, all the content is really charged. It’s both a rallying cry from an artist’s point of view about the world around us and a kind of manifesto for the future.”

Also taking to the stage are the “outstanding” subversive Irish dance duo, Up & Over It, the “absolutely brilliant’” physical comedy duo Lords of Strut, Ireland’s only Cyr wheel artist Ronan Brady, along with Megan Riordan of Once: The Musical, “a real rising international star,” and THISISPOPBABY favourites Ruth Smith, Adam Matthews, Nicola Kavanagh and Movement Directors Peter Harding and Suzanne Cleary. Each performance will also feature a special guest, about whom Jenny remains tight-lipped. 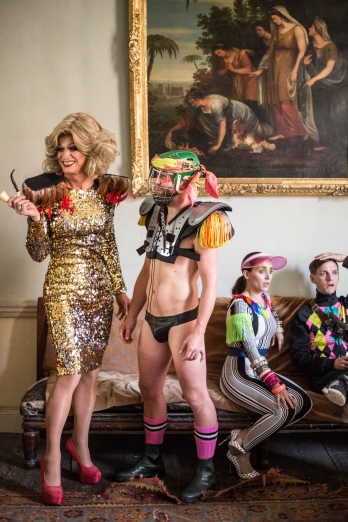 THISISPOPBABY revel in straddling the boundaries of popular culture, counter culture, queer culture and high art. “We’re operating in that space where we are absolutely unashamedly and delightedly pulling from pop culture, as well as pulling from cultures that are more at the fringes. What we mean by high art is that the quality of the forms, the writing, the design, the composition is all excellent. But the delivery is in such a way that it says more to more people, because we’re really determined and passionate about bringing more people to theatre. And getting to the point where people don’t even really feel like they’re going to a theatre show, they just feel like they’re going to a THISISPOPBABY show, and they know they’ll have a good time.”

“There’s a real hunger for the work. I feel like the shift in outdoor music festivals in the past 15 years or so to be these kind of playgrounds and places of communion and arenas where people create instead of just being consumers, has greatly influenced the appetite for work like ours.”

Jenny is confident in the show’s ability to provoke and subvert. “The job I guess is to still prod and poke as well as soothe and entertain. We’re very conscious that there’s been a lot of talk about echo chambers and speaking solely to people who have the same opinions as you. Looking back to the Irish Revival, there was a period when there was a real exchange of ideas. It was people who absolutely disagreed with each other but they were still writing into the papers and the journals, having a conversation about it. And it didn’t always immediately become a polarised conversation. So how to keep the conversation an exchange of ideas is something that we’re interested in as well.”

RIOT is not just a “really good night out.” It’s also deeply engaged with social issues. Jenny picks out Emmet Kirwan’s new piece, Heartbreak, about a teenage mum: “There’re a lot of ideas in there about how we treat women and how we treat mothers, women’s rights and women’s bodies and so on.”

“There’s another piece where something funny may or may not happen to a representation of Jesus, so that’s always something we’re playing around with, this kind of shucking off of organised religion.”

“There’s references to a lot of what’s happening in the world outside us, but we’re kind of honing in on reconnecting with each other and the safe space that art and theatre needs to be and needs to continue to be.” Sitting in the Project Arts Centre the day after the removal of Maser’s Repeal the 8th mural, this mission feels extremely pertinent. “It’s also a rallying cry for freedom of expression and freedom of ideas.”

So what should we be expecting walking into the Spiegeltent? “A really really good night out that maybe sparks conversation and causes you to rethink something. Or maybe causes you to be inspired to make something yourself. Or at the very least, maybe gives you some kind of catharsis in this very very stressful world that we’re living in at the moment.”