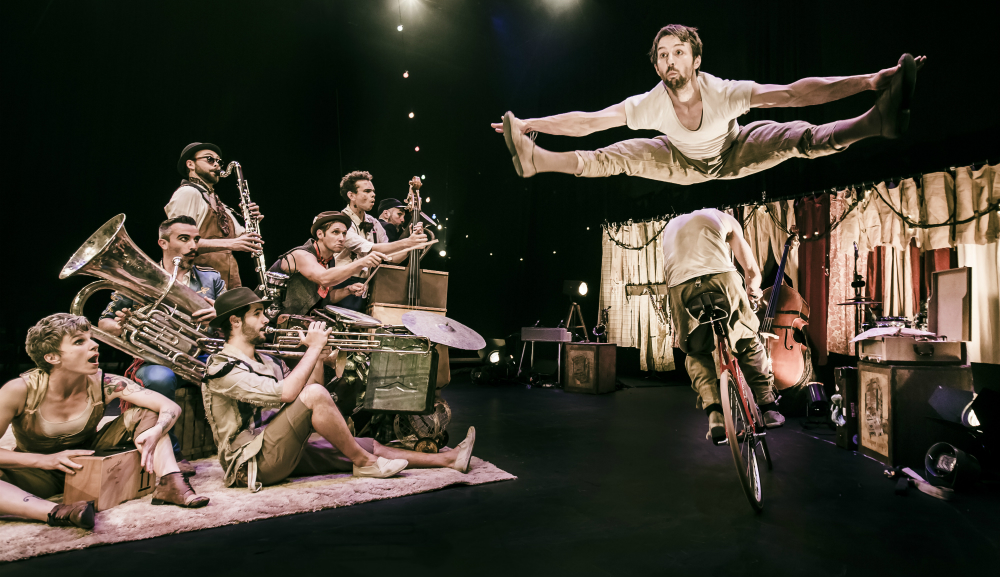 Acrobatics, jazz, old-timey circus tricks, sweat, song and dance: the central show at this year’s edition of Tiger Dublin Fringe, Company 2’s Scotch & Soda, is the kind of high-octane riot that the Spiegeltent was designed for. The infamous travelling venue returns to the Fringe for the first time since 2009 and will set up its stall on Wolfe Tone Square in the heart of the city centre, creating a hub around which the festival atmosphere will simmer throughout its two-week stay, doubtlessly fuelled by the energy provided by this particular extravaganza.

Led by David Carberry and Chelsea McGuffin, Company 2 is an elite gang of many of Australia’s top performing talents, with their backgrounds split between the circus arts, acrobatics (notably, the veteran trapeze artist known only as Mozes) and dance. Company 2 made their name with shows like Cantina and She Would Walk The Sky, each of which have had success across the Irish Sea, but this is the first time their particular blend of performance will reach these shores.

Scotch & Soda sees Company 2 collaborating with brass-band The Crusty Suitcase Band, whose live soundtrack to these feats sounds like the intersection between Rain Dogs-era Tom Waits, the band Beirut and the Pink Panther theme tune. The band, dressed like escapees from the Come On Eileen video, blend genres together with a quartet of brass instruments, over skittering beats conjured by percussionist and composer Ben Walsh from a junk-yard kit.

All of this immaculately controlled chaos takes place in a mash-up of olde worlde aesthetics that’s littered with military jackets, wax-tipped moustaches, fedoras and a fixie. It’s part vaudeville and part Victoriana, part Mad Max and part Bugsy Malone, all adding up to an eye-watering overload of the senses.

Fresh from a lengthy 10-week residency at the London Wonderground festival at the Southbank Centre, as well as previous excursions in Edinburgh and on home soil in Australia, Scotch & Soda will form the backbone of Tiger Dublin Fringe’s programme, with early evening performances taking place each day of the festival (with the exception of each of the two Mondays) before the Spiegeltent is put to use for even more musical highlights including the likes of the Turning Pirate Mixtape (Friday 11th), Booka Brass Band (Saturday 12th), Mx Justin Vivian Bond (Tuesday 15th) and the newly announced Holly Herndon (Thursday 17th) and Christian Löffler and Laser Tom (Saturday 19th).

Considering the pedigree of the performers, the reputations they have garnered for their shows overseas and the melange of voguish arts they combine, this looks set to be one of the most popular productions at the 21st edition of the Fringe. All the signs point to Scotch & Soda being just the tonic to get you into the festival mood, so why not have a sup?

Totally Dublin has a pair of tickets to give away to performances of Scotch & Soda on each of Wednesday 9th, Sunday 13th & Tuesday 15th September. To enter, see go our competition right here: www.totallydublin.ie/more/competitions/scotch-and-soda/