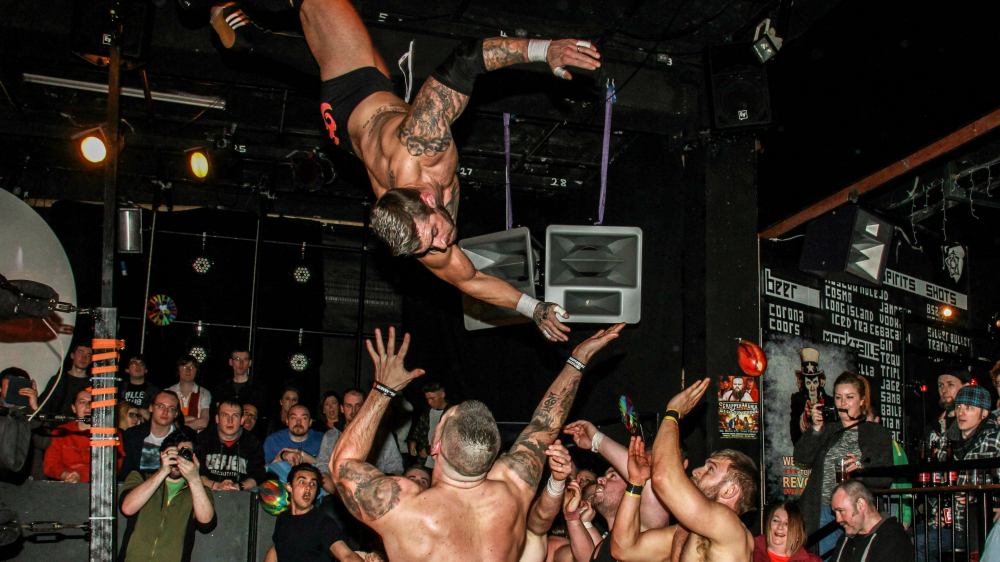 This year, for the very first time in its 21 year history, the Tiger Dublin Fringe festival will be playing host to a wrestling event. Over The Top Wrestling (OTT) is a wrestling promotion organised by Leonard Hanna and Joe Cabray. While promoting wrestling events around Dublin marketed towards children, Hanna noticed that more and more older fans were attending the shows: ‘Not parents, but men and women, 18 to 30 and up who came just because they’re big wrestling fans and enjoy the live atmosphere of an independent show.’ Seeing a gap in the market, Hanna and Cabray decided to launch a completely separate promotion which ‘didn’t have to adhere to the PG guidelines’, and so OTT was born.

OTT has been enjoying a residency of monthly events at the Tivoli Theatre since late 2014. Hanna describes the venue as having ‘high quality production values, yet a dark underground feel.’ In 2008 World Wrestling Entertainment (WWE, the largest televised wrestling promoter on the planet) did away with its colourful displays of blood and cursing in order to adopt a family friendly PG rating. The growing success of global independent wrestling promotion in recent years is likely due to fans seeking elsewhere the gritty ‘dark underground feel’ that defined the brutal golden age of the ‘Attitude’ Era of the ’90s.

With televised wrestling having its corners blunted, the appeal of smaller promotions is obvious: they’re riskier, unpredictable, and uncensored. Hanna’s promise that OTT is ‘unlike anything you may have seen on TV before’ might sound a little exaggerated (considering TV wrestling has included plot lines concluding in the birth of a human hand), but there is definitely something to be said of the infectious power of live entertainment, especially when it channels physicality, drama, and comedy to such extravagant extents as wrestling.

Being included as part of the Tiger Dublin Fringe festival is an honour and a great achievement according to Hanna, who says that ‘wrestling is truly an art form.’ He describes how a good portion of OTT’s regular fans ‘don’t watch wrestling on TV or ever, for that matter’, instead only finding themselves ‘hooked’ after witnessing the live show for themselves. Independent wrestling promotions like OTT seem more attuned to wrestling’s origins as a live form of carnival performance. When asked about how OTT fits in with the typically ‘theatre and arts’ context of the Dublin Tiger Fringe, Hanna confidently said: ‘It’s theatre, circus, sport, melodrama, acrobatics, comedy, comic book violence and much more all rolled into one extreme live entertainment event.’

Professional wrestling has demonstrated its ability to accurately reflect aspects of modern culture, but historically, and contemporarily, it has relied on problematic representations of minorities. Hanna says that OTT attempts to avoid offending people by ‘not featuring any sort of political, sexual, or religious references’, however, the roster features stereotypical characterisations of the travelling community (The Wards are ‘a dysfunctional family of fighting Irish bare-knuckle boxers’) and inner-city Dubliners (The Lads From The Flats). Although Hanna insists that their characters are ‘just parody, for entertainment purposes’, it’s important to note the problems inherent in this kind of stereotyping, which is seemingly an inescapable trope of the genre. Wrestling as a parodic form has the potential to be redemptive and transgressive; it will be interesting to see whether this can be achieved when OTT brings their show of high octane wrestling to the Spiegeltent. Here’s hoping it’s like Fair City, but with piledrivers.

Over The Top Wrestling, with special guest host for the night, Aonghus Óg McAnally, takes place at the Spiegeltent on Wolfe Tone Square on Friday 18th September with doors at 9.15pm. Tickets cost €16.