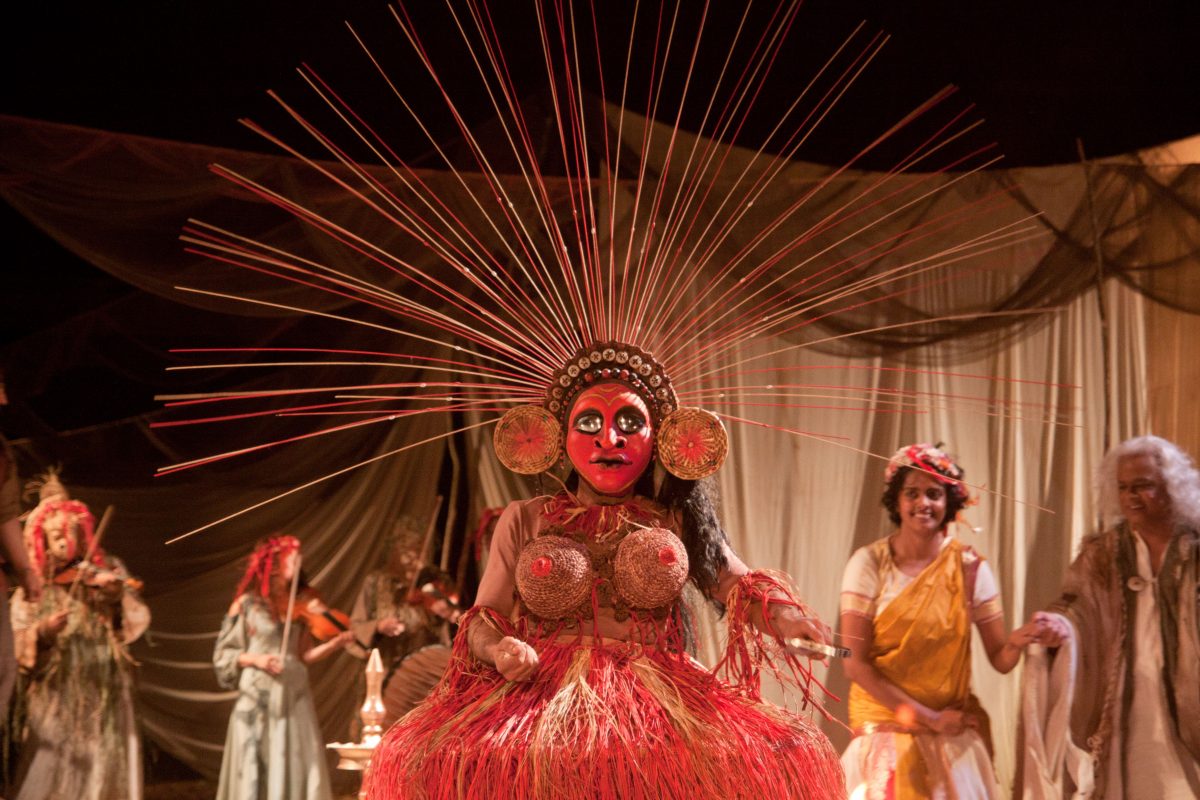 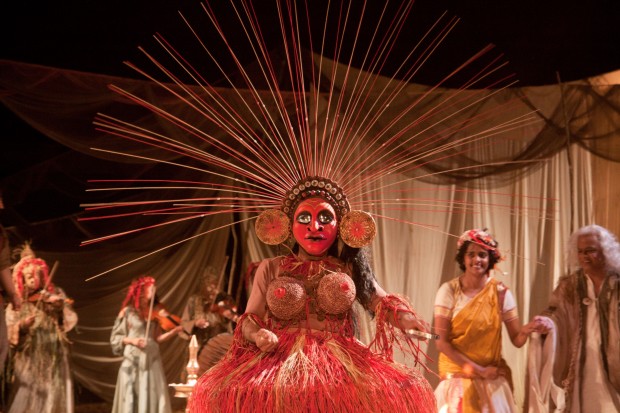 The Tempest, you may well remember from the bizarre films that they made you sit through at school (link below in case you need reminding), is a play well used to eccentric interpretations. To a point, these attempts, it might be argued, no matter how weird or wonderful, are growing a little stale, and as The Indian Tempest’s shipwreck sequence begins you might be forgiven for feeling a little apprehensive. Yet what unfolds is a novel adaptation which for the next two weeks, one can watch against the stunning backdrop of Trinity College’s Front Square. As the sun comes down, the stage lights go up, and the birds circling overhead, along with the not infrequent chimes of the clock tower, only serve to further enchant the audience.

Though it’s Shakespeare’s last play and some are inclined to say that, plot considered, the Bard must have flipped his lid by then, many of the lines may well be some of his most poignant. There may be some unease then, when one learns that large chunks of the play are in a mix of languages. What was really impressive however, was that so skilled the acting, and so enjoyable the music that it did not feel as if one was missing out at all. On the contrary – when Ferdinand sings in a foreign tongue for a long time about his love for Miranda, any ignorance of the language actually just allowed for enjoyment of the melodies.

Music was a central element of the production – and the range of Indian instruments, along with the regular interruptions of some adept violinists really complemented the Kerala style which largely determines the nature of the play. The masks and costumes worn are typical of the region, though they didn’t feel out of place in the context of the far off island the characters find themselves upon. It will be really interesting to see the play’s reception when it takes up a residency in India next year, before returning to Europe for a stint at the Globe. It may well be asked whether The Tempest will work in and Indian style, in for a large part, Indian languages and for an Indian audience, and if the poeticism of the words can be conveyed in a language other than that which it was written in.

Yet perhaps the reason why The Indian Tempest is so successful is that the company set about from the premise that only thirty percent of communication passes through the spoken word. Footsbarn are generally acknowledged to be a company of real integrity, and their intention so they say, is to convey the story through ‘the language of theatre’. Perhaps a soppy sentiment, but an aim that they not only meet, but actually surpass. If you find Shakespeare pretty indecipherable as it is, or just feel that watching the plays demands a lot of effort, you must not be discouraged by the revelation that much of the play isn’t in English, because much of the play isn’t really in language at all. The Kerala theme, though pretty visually spectacular, isn’t a distraction or deviation from the plot, because it actually conveys the goings-on in the play really effectively, and this is compounded by the goosebump-inducing violin riffs that accompany the action. It is rare to see an interpretation of Shakespeare where the language takes such a backseat, and the magic and mysticism of the play takes over, but The Tempest is surely the right play to be adapted in this manner. Such an ethos does, after all echo the sentiments of the characters; ‘You taught me language; and my profit on’t…Is, I know how to curse” hollers Caliban at Prospero.

For the Footsbarn Theatre, such a heart felt opinion from one whom language had so oppressed clearly struck a chord, and thus The Indian Tempest relies on more than Shakespeare’s words. Certainly see it while it’s on at Trinity, the atmosphere may very well send chills down your spine. Fortunate then, that there’s free tea and coffee as an added incentive (as if you needed one!).

The Indian Tempest is on in the Front Square of Trinity College until June 16th, as part of The Dublin Shakespeare Festival. Tickets are €22/20/15. The Totally Dublin guide to the festival can be found here: https://www.totallydublin.ie/theatre/a-guide-to-the-dublin-shakespeare-festival/

And to refresh your memory…