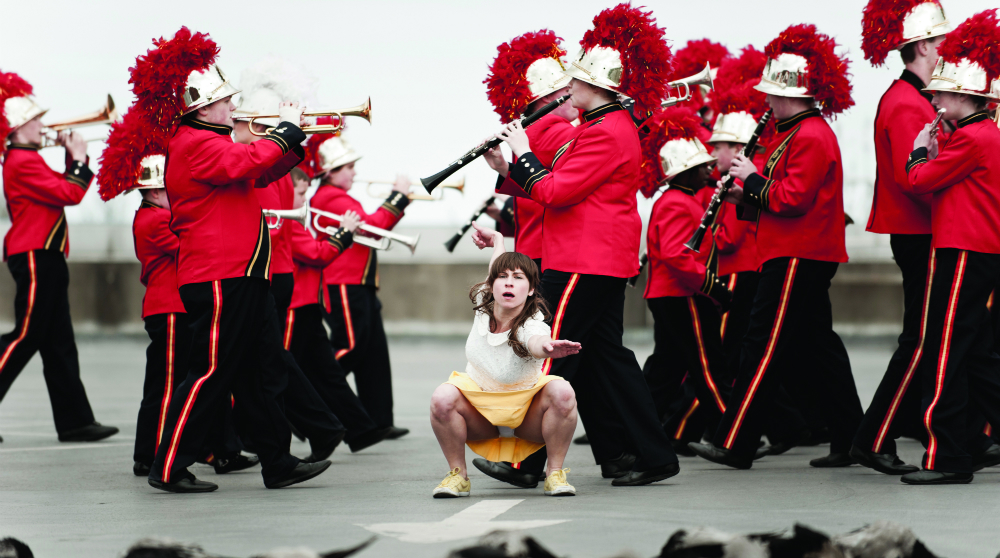 Songs from a Car Park

By Jessica Kennedy and John McIlduff

7.15pm: I leave the house to cycle from Stoneybatter to Tallaght, aiming to arrive before 8pm (when the show is scheduled to start). Time enough to find the venue (a car park) and pick up my ticket.

7.40pm: I’m loving this. The cycle is exhilarating, backdropped by a stunning sunset, bringing me through headily novel Dublin landscapes. Yes, cycling was definitely the way to go.

8.00pm: Arrive at The Square shopping centre in Tallaght, sweaty and panting. No evidence of a show anywhere. I take a lift to the top of a multi-storey car park. The roof is empty. I take the lift back down and ask a security guard for directions.

8.05pm: I scurry around the side of a building and, quite anticlimactically, come upon a trestle table serving as box office at the entrance to a car park. There are a handful of cars (eight or so) arranged in a semi-circle, facing another car parked in isolation a little way away. The show hasn’t yet started, but I’m told there are no car seats left. I regretfully take my place on a stand overlooking the cars. A girl on rollerskates hands me a cone of popcorn as I pass. I’m given headphones tuned to the same frequency as the car radios, over which we’ll listen to Denis Clohessy’s musical score.

8.10pm: The lights go up in the lone car and we see three figures seated on the back seat…

Songs from a Car Park is a collaboration between choreographer Jessica Kennedy and filmmaker John McIlduff, a winsome piece of site-specific dance theatre that grew out of an earlier work for film (Motion Sickness). The setting is quite something – a rooftop car park in Tallaght with the Dublin mountains as backdrop. A fortuitous full moon on the night amps up the atmosphere, casting its milky light over Sarah Jane Shiels and David Fagan’s whimsical and minimal set design, a stand of trees in earth to one side, quaint lamps sprouting up between the trunks.

McIlduff’s influence is apparent as the performers (Eddie Kay and Marine Besnard along with Kennedy herself) weave a show that is distinctly filmic in scope. They use the ample depth of the car park to create changes in perspective that are not possible on a stage, becoming tiny, backdrop figures at some points, while other moments take the principle of a close-up to extremes as Kennedy and Kay clamber in and out of the cars containing the audience, or slam their bodies up against the windows.

The choreography is playful, often recalling schoolyard games and there’s a certain casual, understated aspect to the movement that’s almost offhand. The three performers cycle through a sequence of duets and trios that are discrete vignettes rather than forming a connected whole.

There are some memorable moments (Kay’s tightrope balancing act along the parking lines, Kennedy’s curious final solo sequence, a backwards crawling whirling squat, and the introduction of a marching band), but by the second false ending I’m shifting in my seat. The lines of the show are loftily and imaginatively drawn, but the content is too slight to fill them out.

All told, Songs From A Car Park is a sweet little ditty that might benefit from being a verse or two shorter.