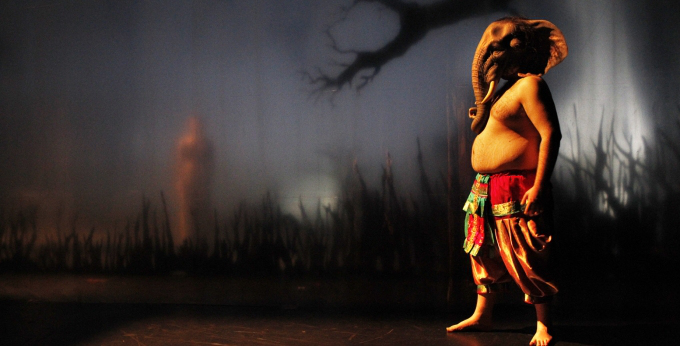 What do Ganesh and Hitler have in common and how did this show come about?

It was developed over a five-year period. We were trying to create a show that didn’t involve acting and just involved drawing, and one of the actors kept drawing images of Ganesh. Another exercise we were doing involved distorting voice, creating reverb and amplification, and one of the actors created a neo-Nazi character out of it. So we had the two images, and then just Googled them. We found a lot of websites that suggested that the Nazis appropriated the Swastika from Hindu culture, which isn’t necessarily true. Then we thought wouldn’t it be fun to have Ganesh go back to Nazi Germany to reclaim the Swastika in a sort of Hollywood spectacular? But we’re a little regional theatre company in Australia, tackling a huge show that involves the Holocaust and an Indian deity, we didn’t feel we had the right to do it. We sat on it for a while and then after some audience comments after one of our shows, we realised there was a huge fascination with how the company makes work, which is predominantly about power issues. So that made us think of putting this autobiographical element in the show, this element about how we make theatre. So you have the big historical drama next to a smaller, more subtle drama about the relationship between a group of actors and a director, which we’ve all seen become abusive.

You questioned your right to stage the play? Why?

Ganesh is not an easy work, although in some ways it is, because it’s really funny. There’s a question about the right to tell other people’s stories, cultural appropriation, and there’s a tension for the audience as they feel complicit. And I mean these actors are at one point discussing their right to even exist, so there’s suggestion of that tragedy that thankfully will never happen again.

The actors in Back To Back have what are perceived as learning disabilities, and you’ve commented before that audiences often react strongly to the combination of this and the work they’re producing. Could you explain why?

At a post-show debate a few years ago one of the audience members questioned the idea that these actors were capable of creating this show, suggesting there was some form of exploitation. One of the actors responded that he had created the show, as had the others, and then asked the audience member to leave. I mean there are interesting questions to raise around the idea of authorship – the work is devised between myself and the actors, and there are nine authors. But it is a collective approach through improv.

How does Back to Back function as a theatre company that hires actors with learning disabilities? How does Ganesh Versus The Third Reich reflect on that, given its autobiographical element?

We’re a theatre company that works around five employed actors with perceived learning disabilities. We don’t have any huge political agenda, any political message that comes out simply comes from us trying to make art. In some ways these actors sit outside the realm of society and are therefore great commentators on everyone else. In a way the company has built a body of work that uses that unique situation. The terminology used in Australia is “intellectually disabled”, but I would watch the work and it was really intellectually robust. In a way Ganesh is a work that is political, that takes place in a difficult time, and that questions the right for these actors to exist at all in society, by referencing Hitler’s T4 program that sought to sterilise and kill people with disabilities. They perform in German, Sanskrit and English, as well as taking on these themes, so it’s a dense piece of work. Ganesh is not an easy work, although in some ways it is because it is really funny.

Ganesh Versus The Third Reich runs from October 1st to 4th at the O’Reilly Theatre, Belvedere College, Denmark Street, Dublin 1. Tickets cost €25 to €30.