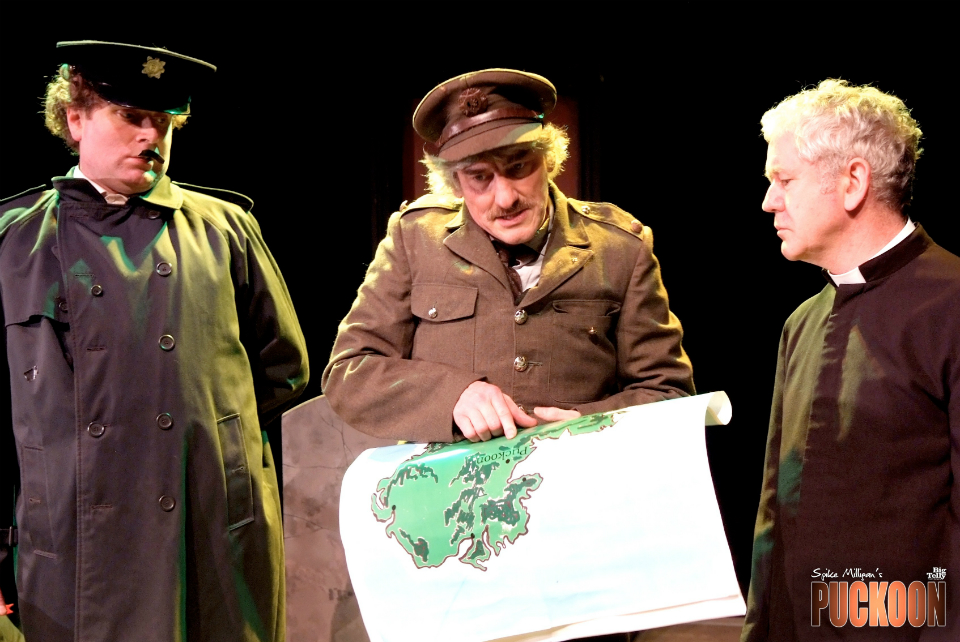 Big Telly Theatre Company returns to Dublin later this month with Puckoon, an adaptation of the novel by Spike Milligan. Set in 1922, the fictional town of Puckoon on the Irish border finds itself partitioned by the Boundary Commission leaving the church and graveyard separated and, graver still, the drinks in one half of the pub costing more than in the other. As the tale unfolds, we become intimately acquainted with the voice of Milligan – at his Goonish best – re-affirming and ridiculing his characters in equal measure along the way.

This is the show’s third outing, and first to visit the UK, following two successful tours of Ireland in 2009 and 2011. This run, however, promises to be all the more informed by some of Big Telly’s more recent, experimental, and socially conscious projects. In the last five years, the company has started taking over shop windows, and the shops themselves, and using them as creative spaces, with a focus on inserting both the company, and a slice culture into the local community. “It’s a way of adding texture and colour to people’s daily life. So while you’re popping into the butchers, to the newsagent, to the postal shop, you see a five minute play. And it’s actually something really exciting for us to consider – that we might be able to consume culture in a different way,” cites Puckoon director and founding member of the company, Zoe Seaton. “I think as a company it’s made us feel so much more connected to the communities we’re working with and because of the shop work, we’ve been working with a lot of traders and looking really carefully at ways to use the arts to make other people’s businesses work better.”

It might seem that in returning to Puckoon, the company are re-formalising their contract with their audience. The innovative direction that Big Telly have taken in recent years has certainly enriched the play’s most recent incarnation, however, and not to the neglect of their community based work. “All the while we’ve been working on these projects, we’ve also been touring theatres. We never stopped that work – we’re just learning all the time. It feels like that dynamic with an audience has become clearer, and it feels, I suppose, that if we’re actually asking people to go out of their way to book a ticket, pay some of their money and come to a venue then we really have to make it worth people’s while. We’ve always been very conscious of that.”

What is it about Puckoon then, that keeps Zoe and the team coming back to reinterpret, and reimagine aspects of the script? “I suppose what really drew us to the material was the framework with its potential for theatricality. For me, that still remains something which a new cast will explore differently; there is always a very ‘alive’ premise to work and a new context to explore and re-explore the material. Although we’re using the same script and three of the cast are the same, it’s going to be a re-invention not a regurgitation I think, because it’s a case of watching each of those people in that room at that moment. The first time, we realised it needed to be quite improvisational, and a product of the people in the room. So whatever script we wrote needed to be a trampoline to bounce off, rather than a real solid thing set in stone. A lot of what is fun about the show is the ad-libbing!”

It’s not the material, improvisational or otherwise, nor the classically Milliganesque wit alone that might draw an audience back. Thematically, Puckoon hints at the repercussions of drawing purely perfunctory borders across a landmass, and though the disparity between the prices of pints seems suitably tongue in cheek, such questions remain pertinent ones, and worth readdressing: “Puckoon absolutely satirises a way of dividing land and what that means in terms of actual points on a map, but it’s entirely relevant today because we’re still arguing about the border, about any number of borders, or say about what might happen if Britain does decide to leave Europe. Repeatedly, there are borders drawn, and we decide where to draw those lines. I’m not saying this is a political piece, but it’s a play that examines what happens when one group of people decide how to divide up a country. And whether we’re European or not European or whether we’re British or whether we’re Irish – that seems really current to me. More current than ever!”

Puckoon is at the Pavilion Theatre, Dún Laoghaire, on the Thursday 7th and Friday 8th April, and returns to the Mermaid Arts Centre, Bray on Friday 3rd June. More details on Big Telly’s ongoing projects can be found at www.big-telly.com