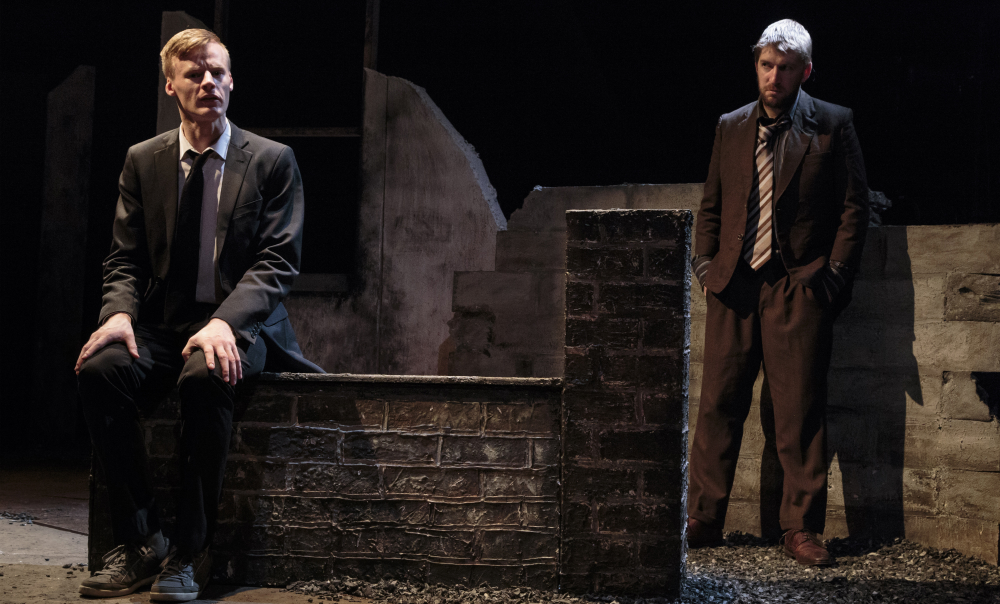 Upon watching the first season of the TV show Utopia recently, I commented to a friend that I preferred my dystopias to have a flicker of hope, rather than be relentlessly draining like the one found in Dennis Kelly’s creation. Dystopian worlds often prove valuable by encouraging a suspense of disbelief that puts our own world at a remove, allowing the audience all the more to analyse, compare, contrast, as well as indulge in an enjoyable bit of make-believe.

Actors Manus Halligan (Jamie McHugh) and John Cronin (Conal McCarthy) convey the dark reality they inhabit in Reckoners through a series of rhythmically interwoven monologues. Each character is relatively close to an archetype and travelling on an understandably short developmental arc themselves, but these were excellently conveyed by the strangled and abbreviated language – often coarse and funny – of the script and the cartoonish delivery of the actors.

The world built for Conal and Jamie is the town of the ‘Stra – for the town is their world – in a neither-past-nor-future alternate rural Ireland, celebrating a vicious feast day that is a cross between Hallowe’en, the bonfires of The Twelfth, the running of the bulls in Pamplona and the last days of Oxegen Festival. As the two men’s tales intertwine further, we’re granted background, snapshots of the factors that have formed them: the families, the town, the women, the cruelty. What is all the more impressive is how, by the end, we’re in possession of such well-rounded impressions of all these elements.

That we do of course, is testament primarily to the script of Ross Dungan which elicits just enough information in the chewed and spat language each character took turns with to paint the picture for us. At one stage, a particularly traumatic scene is conjured with only the fragments that could be witnessed under each flash of fireworks overhead breaking up the otherwise all-encompassing dark. It serves as a microcosm of Reckoners’ minimalist, noir thrill: rhythmic, violent, evocative and engrossing.