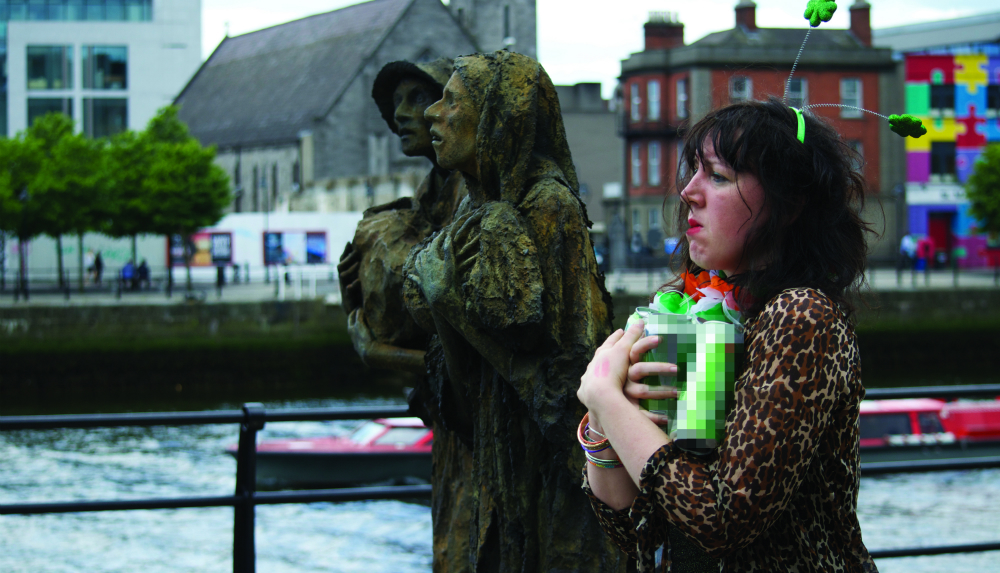 Eleanor Tiernan’s National Therapy Project sees its audience lying prone on a jigsaw of yoga mats, each clutching a complimentary potato, while its host works through a series of personal issues relating to national identity in a tone that is half detached stand-up comedy, half soothing self-help monologue.

During the course of proceedings, using the language of CBT (cognitive behavioural therapy)* and of a more generalised “understanding” and “forgiveness”, Tiernan attempts to narrativise various Irish traumas — British occupation, the reign of Thatcher, the death of the Celtic Tiger, Saipan — in such a way that we might better come to terms with them, let go of our anger, what is characterised here as our shared victims’ mentality, and “embrace a new way of hiberno-living.” The tone is, of course, tongue-in-cheek, but over the course of its 60 minutes, one wonders exactly to what extent, or in precisely what way? In acknowledging and “processing” past miseries Tiernan is reluctant — or unwilling — to provide a social or historical context for the various concessions she invites us to make about them that might in itself then constitute a satisfactory ironic gesture.

What we are left with is a roomful of theatregoers lying prone on their backs listening to new-age instrumental music, being asked to reprocess cultural memory of suffering and oppression as part of the fabric of a shared reactionary sensibility that knows only acceptance and personal readjustment. Our class position, needless to say, enables us to adopt this stance. Indeed, our class position enables us to laugh at ourselves for doing so. Upon exiting, each attendee is given a pre-written, pre-addressed postcard to send to Bertie Ahern, forgiving him for “the lies you told the Mahon tribunal and the neglectful way in which you governed.” Very well for those Patagonia-clad and Pajero-driving amongst us to feel a sense of Zen acceptance about the nation’s ever-widening maw of social and economic inequality (and “oh my gosh, those lies he told the Mahon tribunal!” of all things), but at some point the awful realisation comes that you are literally lying flat on your back on a yoga mat, forgiving Bertie Ahern, and have paid to do so.

That ironic context the show is lacking: this hour-long apologia for the studied self-interest of the rentier classes takes place in the basement of Liberty Hall, our city’s most abiding and visible monument to the betrayal of Irish workers by the Labour-trade unions axis that has historically claimed to represent them. While the National Therapy Project certainly doesn’t mark the apogee of this ongoing tendency (even though at times it certainly feels so), it is undeniably an expression of it. As a piece of theatre, never mind a political gesture, it sticks in the throat. Leon Trotsky, it is said, knew no laughter but of mockery. That laughter echoes here from inside the hollowed-out shell of the workers’ movement, in a subterranean hall named in a mood of deepest irony for Jim Larkin, if you’re inclined to listen.

* CBT is an approach to managing distress popular in contemporary capitalist society, that treats dysfunction as the failure of the individual to respond correctly, or normatively, to the environment or conditions they inhabit, that speaks of deviation and “maladjustment” at the level of the personal, and this at the direct expense of systemic analysis.