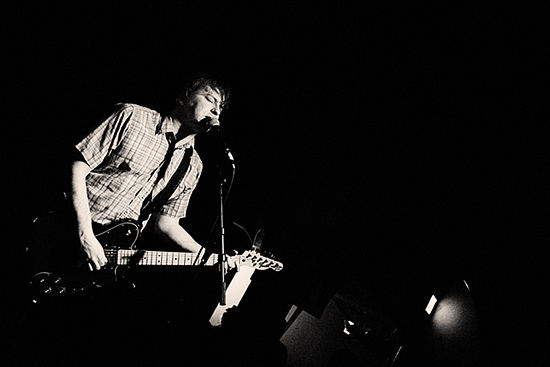 Ben Chasny is the man behind Six Organs Of Admittance, whose discography reads like a free-wheeling journey through the weirder impulses and iterations of folk and psychedelia. Key to it all is Chasny’s unique voice, as well as his droning guitar work. The newest Six Organs release is Ascent, an eight-track blast of damn tasty riffs and powerful drumming. The album sees Chasny rejoined by his old comrades from Comets Of Fire, and together they create the most electrified and physically exciting Six Organs release to date. If you don’t feel like air-guitaring along to opener ‘Waswasa’ then you ought to see a doctor about your chronically low levels of RAWK spirit.

Seriously though, the album marks a bold new chapter in the twisted and brilliant story of Chasny’s work. Another important facet of the Californian’s current musical form is Rangda, the trio where he is joined by Sir Richard Bishop (late of Sun City Girls) and Chris Corsano, continually the most in-demand drummer of the avant-garde. Their collaboration is one of those rare occurrences where the strengths of all three musicians are simultaneously at the fore. Their second album, Formerly Extinct, is just out on Drag City and sees the trio refining and expanding the template set out on their first shows and album back in 2010; twin guitars driving fiercely at the sublime while Corsano’s awesome playing somehow holds it all together. Their increased familiarity with each other is obvious from the get-go and Formerly Extinct shows them pushing each other as much as themselves. Their brief-but-intense touring schedule this Autumn takes in the Supersonic festival in Birmingham, where the three will be performing both together and separately over the course of the weekend.

Where do you find your inspiration as a guitar player? The American Primitive school of playing has been in the spotlight a lot in recent times but your style of playing doesn’t really line up with that. What kinds of things you draw on these days?

Nowadays I don’t find so much inspiration from other players as much. I think when you are younger that happens more often, especially as you are trying to find your way and your sound. You hear some guitarists you relate to and others you reject. At this point I am more inspired by the guitar itself. Sometimes it seems like I can’t do anything new and sometimes it feels like there are still secrets to unlock.

You’ve talked a bit about dreams being an influence on your records as well as needing something to kick-start you into working, a spark of inspiration. Do you find that dreams are a good way to happen across a pure idea? Do they give you a centre or a base to work from?

It does give you an immediate experience to relate to. I don’t use them like they are a resource, but sometimes I will just remember something that happened and it is just inspiring. When you are working with more instrumental music that relies on titles to set the mood of the piece they can be useful because of the over abundance of images they provide. It’s also something you can relate to because you experienced it, no matter how surreal it was.

You’ve moved around a lot right? Does the place you’re living and working have much of an impact on what you do? Do you feel connected to wherever you are at a given time? The west coast especially has a lineage of great psychedelic guitar music, as well as the minimal composers, that a lot of people seem to tap into.

I’ve never felt connected to any place, so no place really has any influence on my music. The exception might be where I grew up in Northern California with its Redwood Forests and fog and Pacific Ocean. I have lived in a different city ever two years for the last 10 years. This year is the first year I’ve made it into a third year living in a town. Of course once I realized that I also realized it’s probably time to move soon.

It feels to me like Six Organs often channels a lot of influences from the late 60s and early 70s – both pop and more rock/psychedelic – and I was wondering what you thought of the way that a lot of AM radio pop and New Age has been used in recent times? Looking at the American “underground” at the moment, it seems like the weirdo hypnagogic pop stuff and the kosmiche synth jammer stuff is everywhere.

Yeah, it is strange. When I was growing up New Age was such an anathema. Same with a lot of pop music from the 80s. I have a friend who used to DJ at bar and his thing was that he would play 80s music that would drive people nuts on purpose. People would get mad and leave the bar and the bartenders would get pissed off at him because he chased the people away. As the years went by more and more kids got into that music and now he says they love it and the only way to make people mad is to play Amon Duul II. So that is really weird.

You recently joined Twitter so I was wondering what you make of it?

I joined because I kept hearing that nobody knew when I was going on tour. I guess nobody looks at the website I have set up. So I did it just to let people know what is going on. I definitely don’t see it as any sort of lasting community or anything like that, though it is nice to see that your friends are still alive, and know that because they just mentioned what colour socks they are wearing.

Finally, I have to ask about the new Rangda album. How different was the approach to making this one, considering you’ve played together an awful lot more than you had when the first album come about? Are the two other guys inspiring people to work with?

The first record was recorded after we had only played together for a few hours and this one was recorded after a couple years of touring together and really getting to know each other. I think you can tell in the music. There are a lot more nasty grooves on this one and weird time signatures. To be honest, right now, the music is a lot harder to play for me. I feel we were really pushing ourselves on this one musically. The other two guys are two of the most inspiring people to work with. Rick plays guitar pretty religiously every day so that rubs off a bit. Chris is just a total work horse and always extremely thoughtful and attentive to each piece. I’ve learned a lot from playing with those guys.

You can find all the details about Supersonic Festival at the official website: http://www.supersonicfestival.com/

Ascent and Formerly Extinct are out now on Drag City. http://www.dragcity.com/artists/six-organs-of-admittance