From Major To Minor: Fangclub 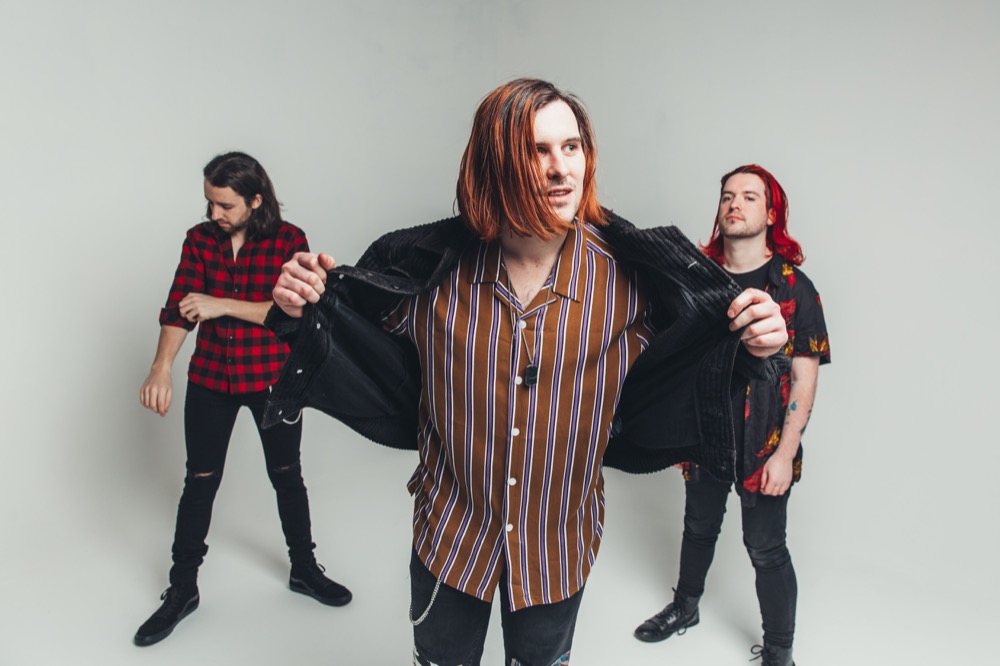 They may be signed to a ‘major’ and produce bombastic rock, but Fangclub are DIY and rather humble about their approach to music.

“I think people can have a false perspective on labels – they think it’s like winning the lottery, but it’s actually like getting a mortgage.”

On rendezvousing with Fangclub there was a degree of apprehension at play. Based on their debut album and the string of EPs that followed, this is a band that places bigness at a paramount. Oftentimes constructing their songs around simple, monumentally fuzzed-out, bass riffs that purposefully lumber toward anthemic choruses, clearly synthesised with a view toward being bellowed by a packed arena. Knowing their penchant for the hallmarks, if not trappings, of big room rock and their recent experience playing to throngs of tens of thousands – it was hard to totally expel the idea that there may be a degree of ego at play over the course of our conversation. Any misgivings are quickly put to bed.

Steven King, Kevin Keane and Dara Coleman, the three men behind Fangclub’s ungodly racket, are total sweethearts. As misplaced as any trepidation was, it’s somewhat fitting that our conversation begins at a point of ill-informed presupposition. Having been signed by Universal in 2015, Fangclub felt immediately annointed for a life beyond the low-ceilinged venues of the domestic rock scene. Alas, the Ying of major label attention comes with the inevitable Yang of suspicion from less “fortunate” musical contemporaries. This, of course, needn’t be bald envy. For many, the mere notion of pursuing (or even worse, gaining!) any widespread recognition for your work smacks of a careerism incompatible with both the ideas of meaningful artistry and just having fun.

“There has always been a fear of signing up to this huge major label machine, but when we met with the label it was very clear that they just loved the band and wanted to help up put out records and grow. We signed to Universal Ireland because the team is so small and they do all the work themselves – they’re like a bigger indie label in that way,” explains frontman Steven King. “In comparison to a lot of indie labels in the UK, they’re actually a lot smaller. So, ‘Major’ might be the banner they have but in terms of the inner workings, it’s pretty much an indie label – it’s crazy,” reaffirms drummer Dara. The North County Dublin trio speak about the business part of “The Music Business” with a novel frankness. Fundamentally, they don’t think the day-to-day workings of Fangclub are that distinct than those of a band operating at a smaller scale. 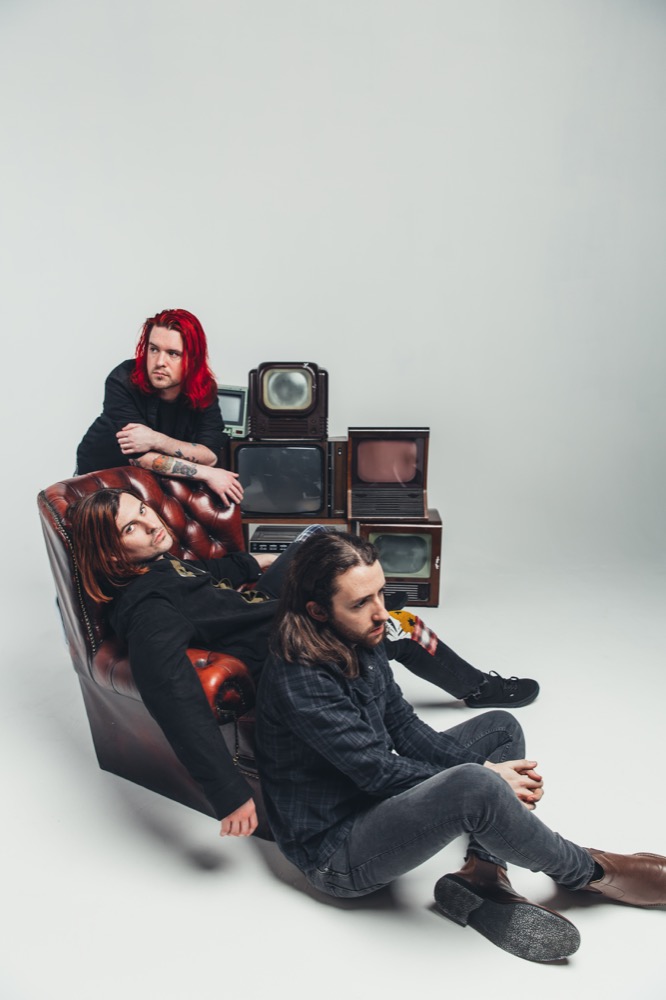 “Everyone thinks that once you’ve signed, that’s when the work is done, but that’s actually when the hard work starts,” continues Coleman. King elaborates, “We’ve always been very DIY and it would be too terrifying to give that up. We wouldn’t know what to do with ourselves if we couldn’t do everything. I do all the artwork, Dara does a lot of tour managing, Kev handles a lot of the on the day stuff like selling merch. It’s kind of always been like that and it never changed when we got on a label. I think people can have a false perspective on labels – they think it’s like winning the lottery, but it’s actually like getting a mortgage.”

An interesting wrinkle to Fangclub’s relationship to the big time is the extent to which it calls to mind the career narrative of their most pronounced influence – Nirvana. It’s no secret that exposure to the Seattle three-piece was a formative experience for a young Steven King. “It was one of those things and I’ve never really experienced anything like it again. I was hanging out with my friend Ronan. We were calling in to see our friend and her older sister was blasting out Territorial Pissings. It was something about the sound of [Cobain’s] voice in that song. It was like a switch going off in my brain that I just couldn’t turn off. All I was thinking was, ‘What was that?? Everything about THIS, I need to know.’ I remember going home to my parents and saying, ‘I love Nirvana now and I need a Nirvana record.’ My mam was always supportive of my interest in music and everything. So, she went straight out and got me a Nirvana record, but it was In Utero. I remember putting it on, sitting there waiting to hear Nevermind and being almost traumatised afterwards. Like, what the hell is this? I was absolutely fixated and blown away by it. I went and got From the Muddy Banks… and Nevermind was actually the last one I ended up getting.”

I wonder, considering their devotion to Cobain and Co, and the regularity with which that band’s sudden fame is framed as a poison chalice, were they hesitant to put pen to paper for fear of making the same mistakes?

“I never really realised the comparisons to the Nirvana thing until much later,” says King. “[Signing with a major] can feel like it’s the dream coming true, but dreams are fucking weird, y’know?  And sometimes, they can be nightmares. There was always this little fear in me because I just didn’t know where this was going. I tried to control a lot, but life has a way of throwing you a curveball. That fear stuff only started to seep in when we’d signed the deal. We were going on tour for two years and putting out an album. Everything in band life was really exciting and incredible, so in my head I was like, ‘Cool, I’m not going to be me anymore, I’m just going to go be a rockstar’ – but that’s not life. I had some family issues, my family was imploding a little bit. So, to have that extreme negative in my personal life and this extreme positive in the band’s life, it was a harsh push and pull thing that kept happening. I think I was 24 or 25 when we were signing the record deal, so I found myself in that cliched position where I was in my mid-twenties and life was absolutely shit and amazing at the same time. It can lead you two ways, you either numb yourself to it or you fight it and I was too tired to fight it. It was that kind of thing.” 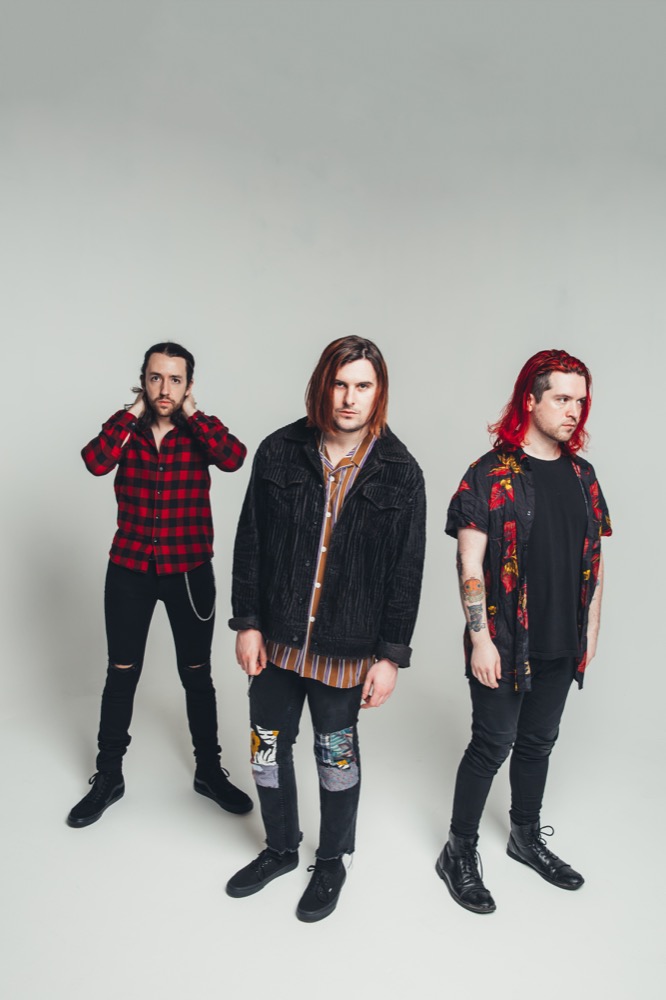 Coleman carries on, “We’ve been able to work it [being signed to a major] because we knew exactly what we wanted and had a strong vision. Once they saw that we knew what we were doing, they saw that it saved them the admin of having to hire someone to do that stuff for us. A lot of people would be given an album cover and say they don’t like it. When they say they don’t want that sleeve and the label ask what they do want, they go ‘ahh, I don’t know, something different.’ Well, that’s not the label’s fault, that’s your fault for not knowing what you want. With us, Steven will do up five different versions of a cover and be like ‘Pick one, motherfuckers!’ The trick is that you have to just make sure that the one you actually want is clearly the best. Trick them into thinking it’s their decision. They get to keep their paycheck, we get the artwork we want, and everyone is happy,” adds Coleman, playfully. I wonder if they’ve ever actively submitted some crummy artwork just to make sure that the cream does indeed rise to the top. All three let out a knowing laugh, “Oh yeah! Sometimes you have to come up with treatments for music videos. Just to make sure they pick the one I like, I’ve given them other options that are just recut scenes from Revenge of the Sith with our song over it and said, ‘I want to do something like this!’ chuckles King.

Confident as the lads are in their own vision, their chosen approach for debuting their sophomore LP must be a little intimidating. They day before its release proper, Fangclub are sitting down for a listening party, where they’ll drop the needle on the record and watch the faces of fans hearing the material for the first time.

“I only really realised that last night. My girlfriend asked me exactly the same question and I was like Oh…shit,” laughs King. “It’s better than Twitter, because at least you can see them talking shit!” Coleman interjects. He continues, “It’s funny, the first song is seven-minutes long. It’s this big slow build up and definitely the most delicate thing we’ve ever released. So, it’ll be a weird one watching the faces when we drop the needle and that plays. They’re going to think we’ve really sold out this time.”

Fangclub’s Vulture Culture is out now on Universal Records. They play the Button Factory on Friday December 13