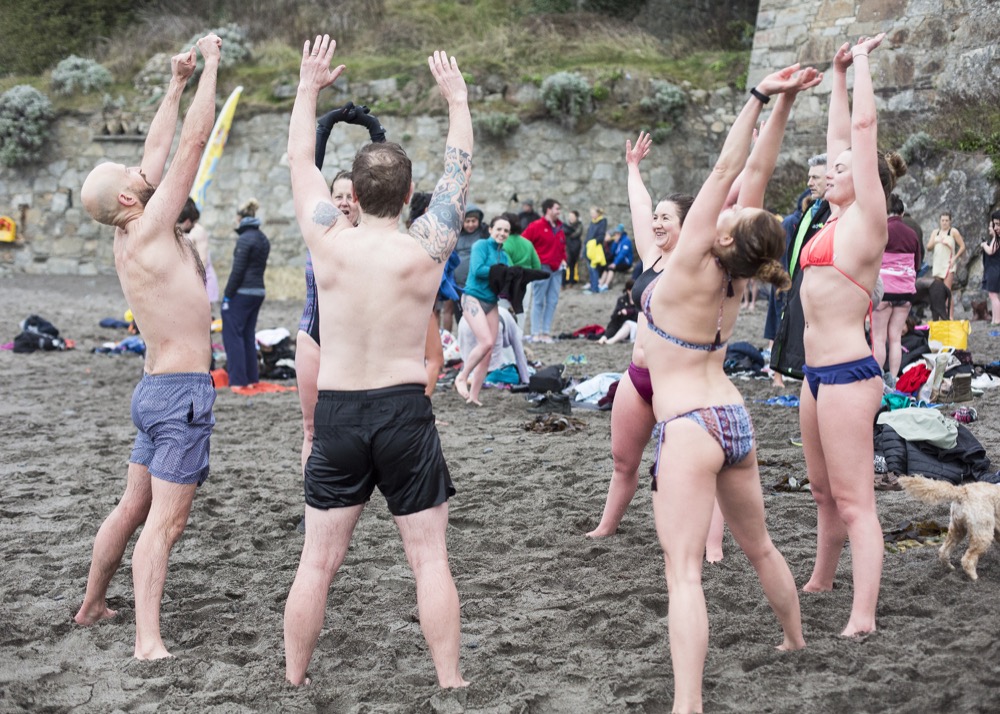 “Initially, I felt a bit woozy. And then I just felt so calm and happy. It changed the whole dynamic of my body”

It’s 7am on a Sunday morning in early March and close to 200 people have gathered on White Rock Beach in Killiney. There are no bleary eyes, just ones emitting nerves and excitement. It’s an overcast morning. Later, Storm Freya will engulf Ireland. Right now, though, it’s mostly calm except for the sea which is wild and menacing. Each wave sounds like a truck thundering up the beach. It’s as if the sea is trying to warn the crowd gathering on the sand to go home. But this crowd are not going anywhere. They’re not the kind of people that scare easily. Even when they are scared of something, they will usually face that fear head on – just like today. 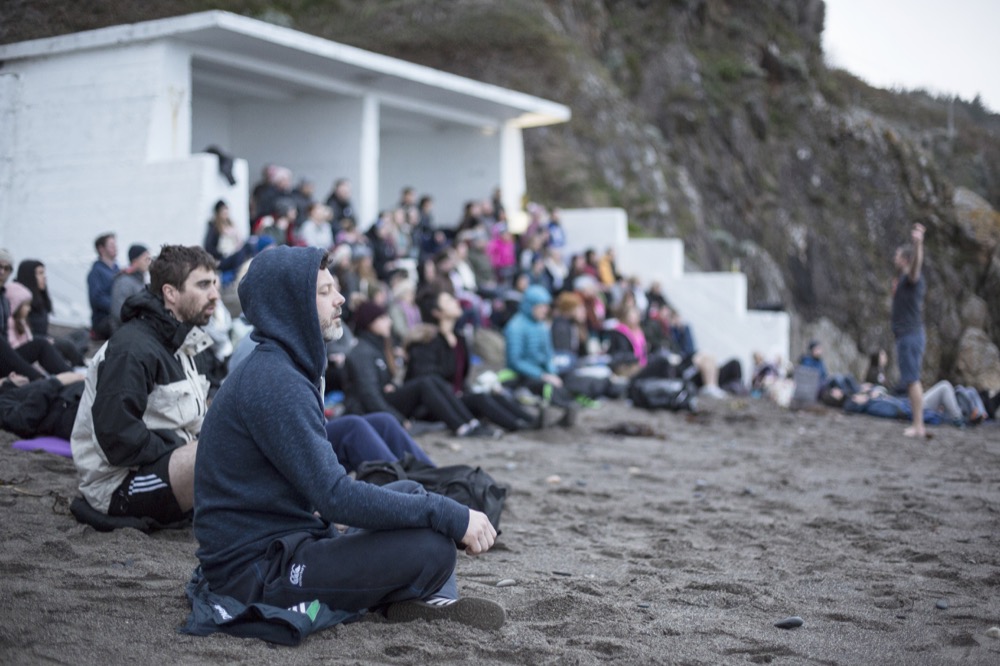 People arrive in ones-and-twos. Some are on their own while others are dragging a friend along for the first time. “I remember you from the last one,” exclaims one person as they greet another on the beach. “This is my friend Martina, it’s her first time.” Martina is beaming. She extends her arm to shake the hand of her new friend. Everyone becomes friends quickly here.

But why are they here?

“I just seen it on Instagram,” says Paul. This is how most people here first heard of Níall Ó Murchú. Niall is the reason why these hardy souls are here at this ungodly hour. They are here for Wim Rise which is named after Wim Hof, a 59-year-old Dutch world record holder, also known as “The Iceman”. Hof is known for his ability to withstand extreme cold. He attributes this ability to a practice of breathing that he has developed over many decades. This practice is known as the Wim Hof method. 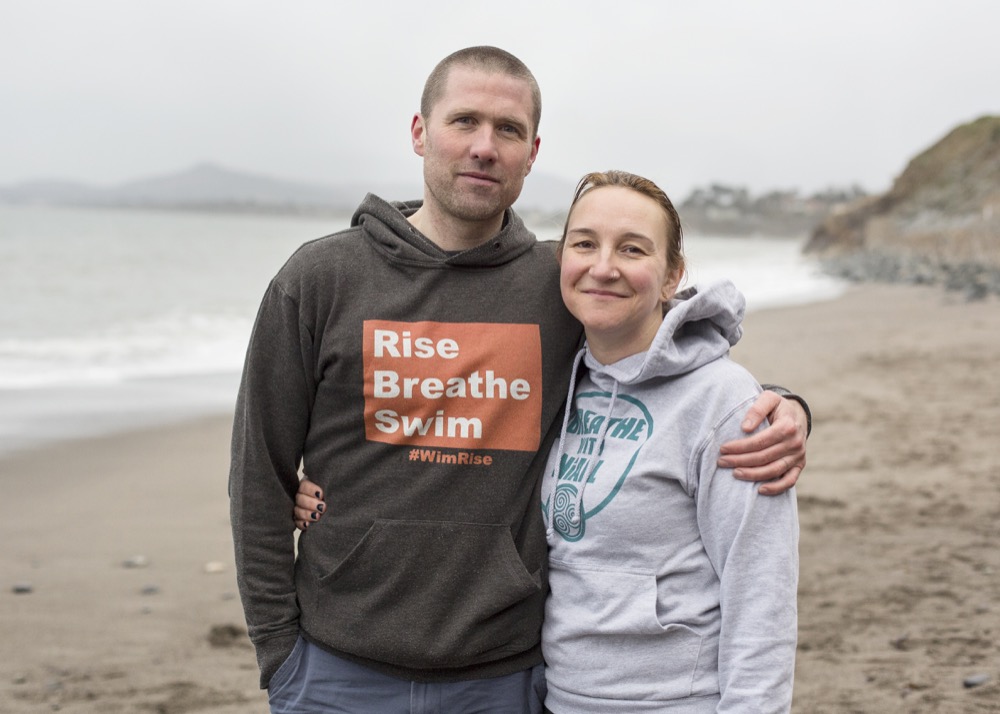 Together with his wife Josie, they run Wim Hof method workshops all over Ireland. And to some extent their involvement in it was born out of tragedy. “In November 2015, my brother sadly died,” says Josie. “So, I was engulfed in grief and sadness and we were just trying to get through the day. I was really looking for something to help me cope with the grief and the stress of day-to-day life.”

Then at the end of October in 2016, the couple heard about Wim Hof through Joe Rogan’s podcast. “We watched a documentary about him, and it just struck a chord. Wim’s message that you could actually heal yourself, through breathing and cold, was incredible.”

This spurred them into action and further online research about it and its attendant benefits. “The benefits that I was really looking for were more energy, a stronger immune system and dealing with stress better,” explains Níall. “And I remember you, Josie, looking over my shoulder reading about it, dealing with grief, trauma and emotional stress. Each of us was looking at it for different reasons. We bought the 10-week course and after watching the first video, I was surprised at how different I felt. That’s when the transformation started to take place.” 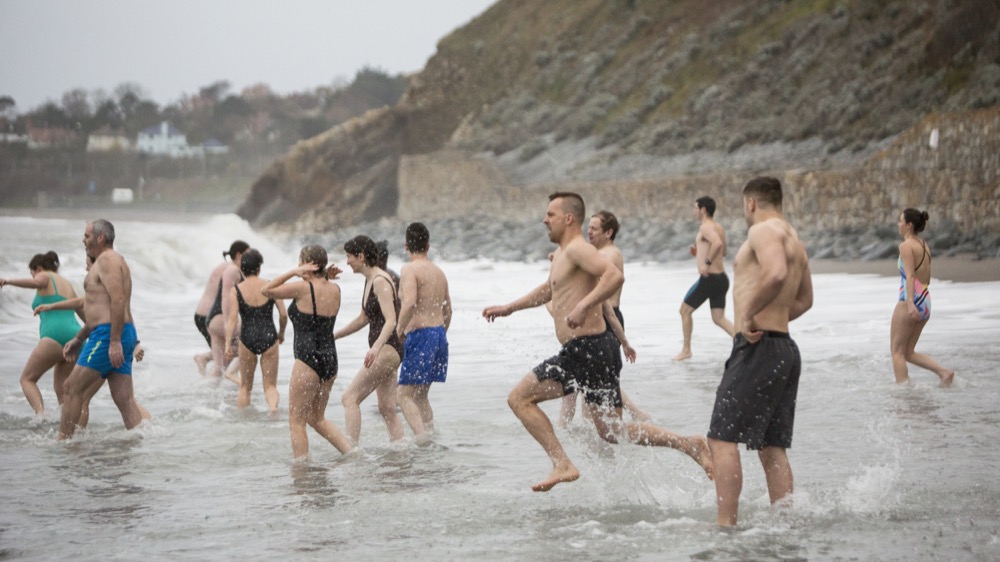 Josie remembers the initial experience like “breathing into my toes and breathing into the ends of my fingertips…it was like there was there was oxygen flying around every bit of my body. Initially, I felt a bit woozy. And then I just felt so calm and happy. It changed the whole dynamic of my body. Then we went into the cold [shower]. I didn’t think I’d be able to do that at all because it was the deep darkness of winter and the thought of getting into a freezing cold shower at ten at night was grim. But we got in and did it and the sense of achievement… It was the most life-changing thing I had ever done.”

“There are all these proven benefits, but then there’s another part of it which is the empowerment you feel,” says Níall. “As you progress through the 10-week course, there’s a point around week five when you have to take a ten-minute cold shower. Even the thought of it now is making me a little bit afraid. When I came out of that I thought, ‘if I can stand in that for 10 minutes, I can do anything.’”

“It’s that idea of putting ourselves through something uncomfortable, something difficult, even just 30 seconds or 10 seconds. It’s that hard thing that makes the rest of life easy. If we only do easy things, life becomes a bit hard but if you push yourself do hard things then life becomes a little easier.” 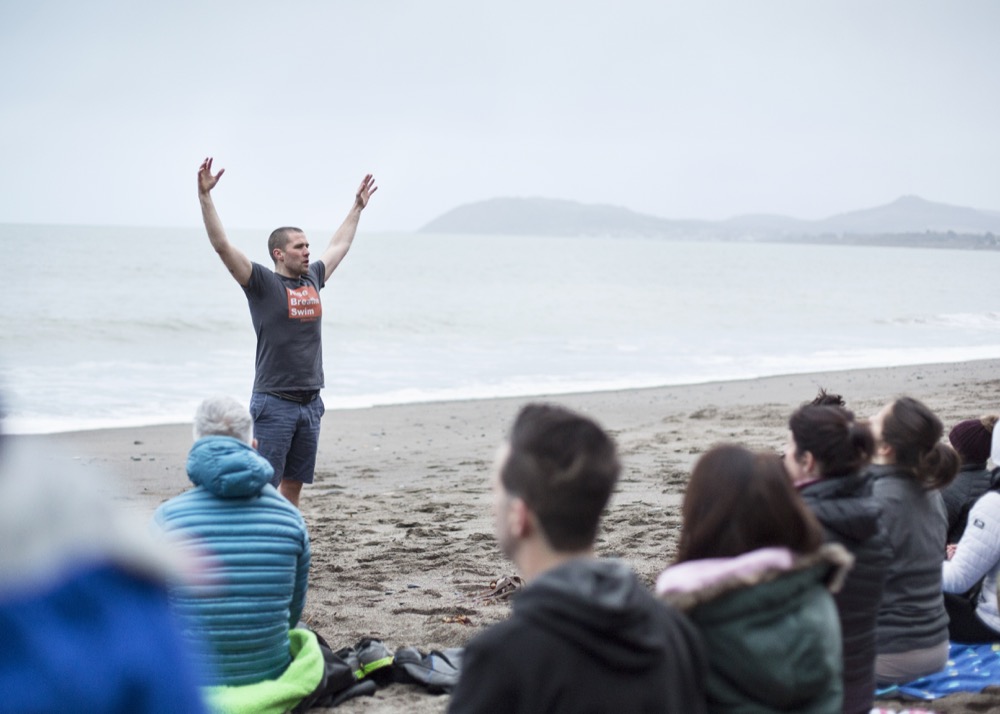 Níall and Josie have even inculcated their four young children into the joys of Wim Hof. “They love it. They really love it,” says Josie. “They love getting into the ice bath. They love doing their breathing. And if they get nervous or if they hurt themselves when we’re in the playground, they say, ‘we’ve got to do our breathing now’.”

“That’s the beauty of it, it’s so practical,” adds Níall. “So when we’re teaching it to adults, we’re helping them deal with the stress of adult life. But for children, the stresses are different. And they know it already, but it’s to remind them, just to breathe. And that’s a tool that they can use for the rest of their lives.”

“I only started swimming a few years ago. I was 37. I only wanted to be able to get into the Forty Foot initially. My friend lent me his wetsuit so I basically had armbands all over me. And I just progressed from there. And I love it now. I absolutely love it. I especially love now getting in at this time of year – I love that bite. This is my second winter of swimming at the Forty Foot. We have noticed a huge increase in the amount of people doing it now every morning. People don’t talk as much now. A few years ago, you’d go down and have random chats with people. You’re bonded by the commonality of getting into the sea and you end up telling complete strangers loads of things. Now that there’s so many people, no one talks as much. More people are vying for their space to get changed.

I started a whatsapp group after the first Wim Rise last August. The people I met through it have been great. There’s 50 of us in the whatsapp now. It’s just so nice and I wanted to keep it doing it throughout the winter. I’m going down to the Forty Foot at least twice a week now. I live in Cabinteely so it’s handy.

It’s definitely becoming a movement. It’s creating a tribe for people. Because we’re all so distant because of social media. No one connects any more. 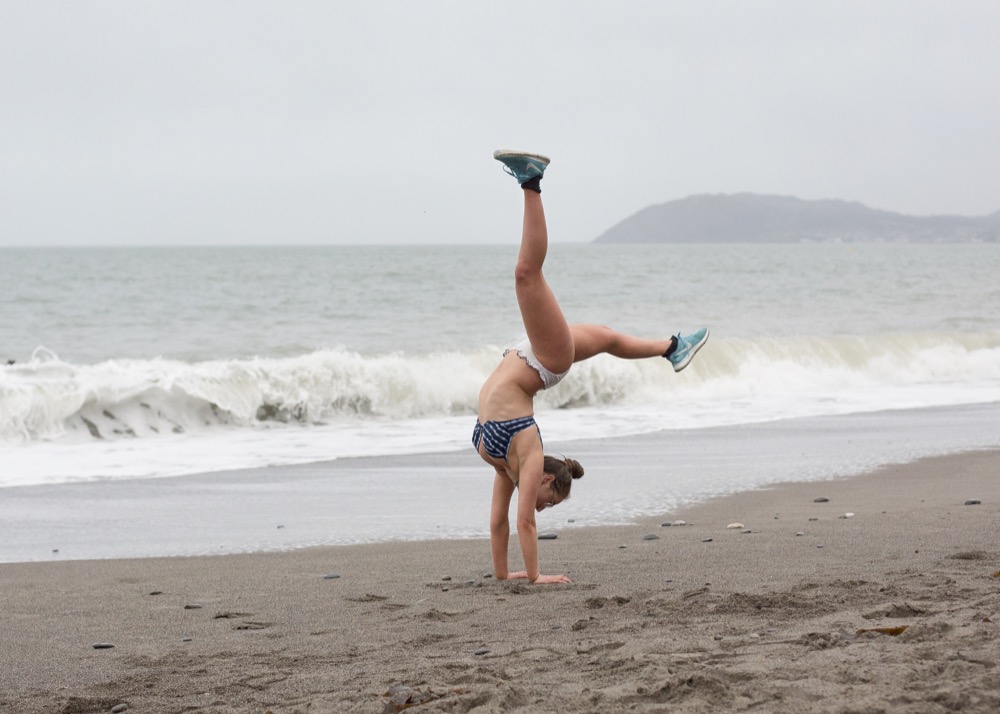 This is the third time I came. The first time I came was in October. I was hooked. I go to a gym and one of the guys I train with has been coming since last Summer, so he said, “why don’t you drop out and have a look and see what you think?”. And I’ve been cold showering ever since. I’ve never felt better. Even in the gym, my performance, I just feel better. You sleep better as well. It’s a very busy world out there and taking a bit of time out to just properly disconnect really helps.

I live in Lahinch and the thing about Lahinch is that it’s so tidal. So, some mornings the sea is way out and the wind is so strong and so cold. And by the time you even get to the water, my mind would be going, “what are you doing Michelle?!”. Once you get in, after a minute and a half it’s nice. The power it gave me just knowing I could do it. It’s just sensational. Over time we started attracting people, and in my local area now there are swims three times a day. There’s a friend of mine Sophie Hellyer and she started the hashtag #risefierce and so there’s a movement now of women all over the world using this hashtag. It’s inspiring women to swim in the sea.

What is the Wim Hof method? 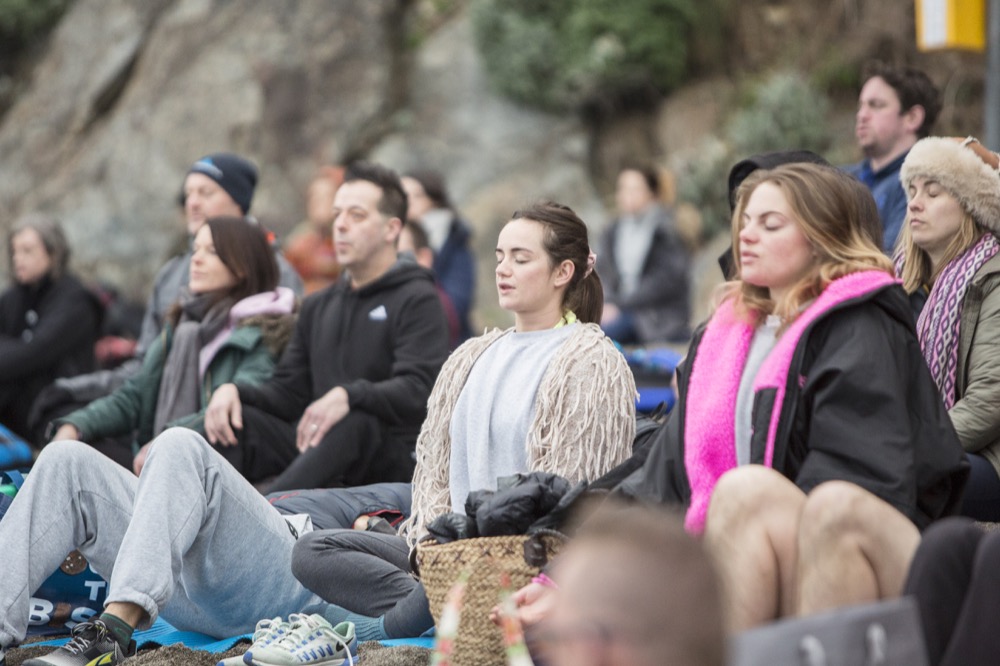 The Wim Hof method consists of three phases. The first phase involves 30 deep breaths – you take a powerful breath in, fully filling the lungs, then “let go” of the exhale. You repeat this cycle at a steady rapid pace thirty times. At this stage, you may feel tingling sensations in your body or slight light headedness. Once you complete the 30 deep breaths, exhale fully to empty all the air out of your lungs. Hold the breath here for as long as you can. When you feel the urge to breath, take a full deep breath in. Hold the breath for 10 seconds, then let it go. The body may experience a normal head-rush sensation. These three phases are usually repeated for three consecutive rounds.