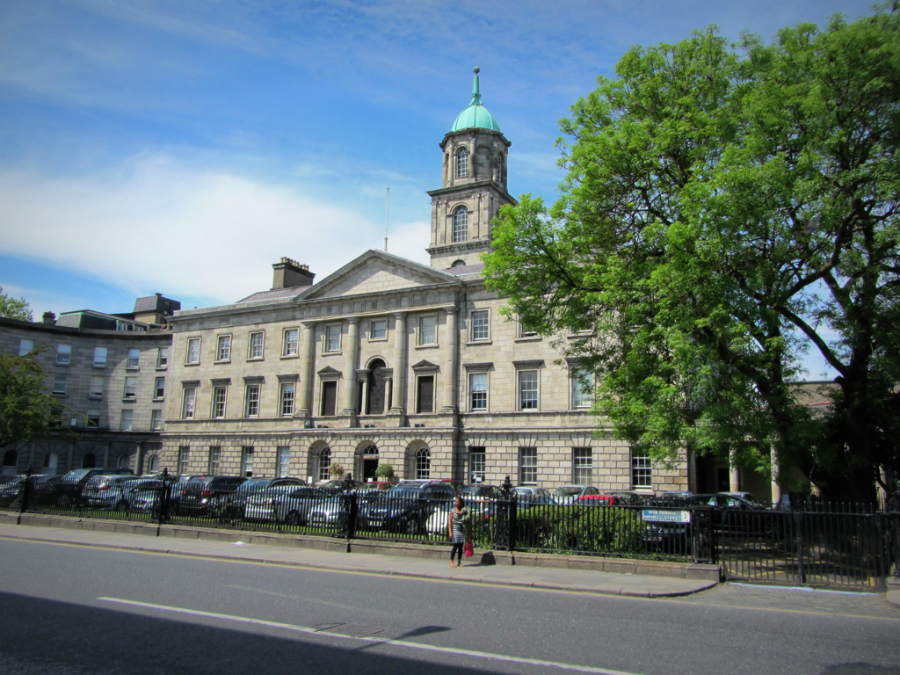 O’Connell Street is the beating heart of Dublin city. We might not even like it that much, but all of life is there. And it hosts lots of beginnings: the (male) statues that punctuate its island mark out the obvious ones but it’s also the street from which tourists and returnees swoop down in to the rest of the city; it hosts the beginning of the protests and marches and strikes that are most important to us and at the very top of the street, amongst a semi circle of buildings that mark out iconic moments in Irish cultural life is the Rotunda Hospital, home to the beginning of all great beginnings and the launch pad for around 9,000 babies a year.

Designed by Richard Cassels, who is also responsible for the grandeur of Leinster House, the Rotunda Hospital was opened on its permanent site by Bartholomew Mosse in 1757 having operated briefly on South Great Georges Street. Mosse witnessed the dire conditions in which Irish women were expected to give birth and committed his life to establishing Dublin’s first ‘lying-in’ hospital. Previously mid-wives were largely untrained, Paris being the closest place in which to learn midwifery and so the Rotunda became the first maternity and training hospital on the two islands. Now it’s the oldest continuously functioning maternity hospital in the world and the most active in Europe – hidden up there at the top of O’Connell Street.

The Rotunda was a beautiful building, built to attract the attention of the moneyed classes and with it their patronage and contributions. The hospital was neatly divided in to a busy hospital and a busy hub of social activity for parties and fund-raisers. The ‘rotunda’ from which it takes its name and which was at the time considered the finest circular building in Britain is now the Ambassador Theatre while the ‘supper rooms’ were ceded to the Gate Theatre. Apparently there’s a secret, tiny chapel nestled amongst the warren of wards that would give the Sistine a run for its money, a rococo vision decorated by Bartholomew Cramillion.

The Rotunda hospital is the apex of an incredible part of the city, lush with history like a microcosm of Irish life. To think of what’s in that square mile – the Rotunda and the Garden of Remembrance – all birth and death, it’s almost mythic. 300,000 babies are thought to have been delivered so far and the Rotunda represents a chapter of reproductive progress of which Ireland can be proud.

Mosse poured a great deal of his personal fortune in to the Rotunda and died penniless at the age 47 when he was buried in an unmarked grave in Donnybrook Cemetery. The Rotunda continues to function as a battle ground at the top of a street where all Irish battles take centre stage, in a part of the city where all of our dramas are played out.