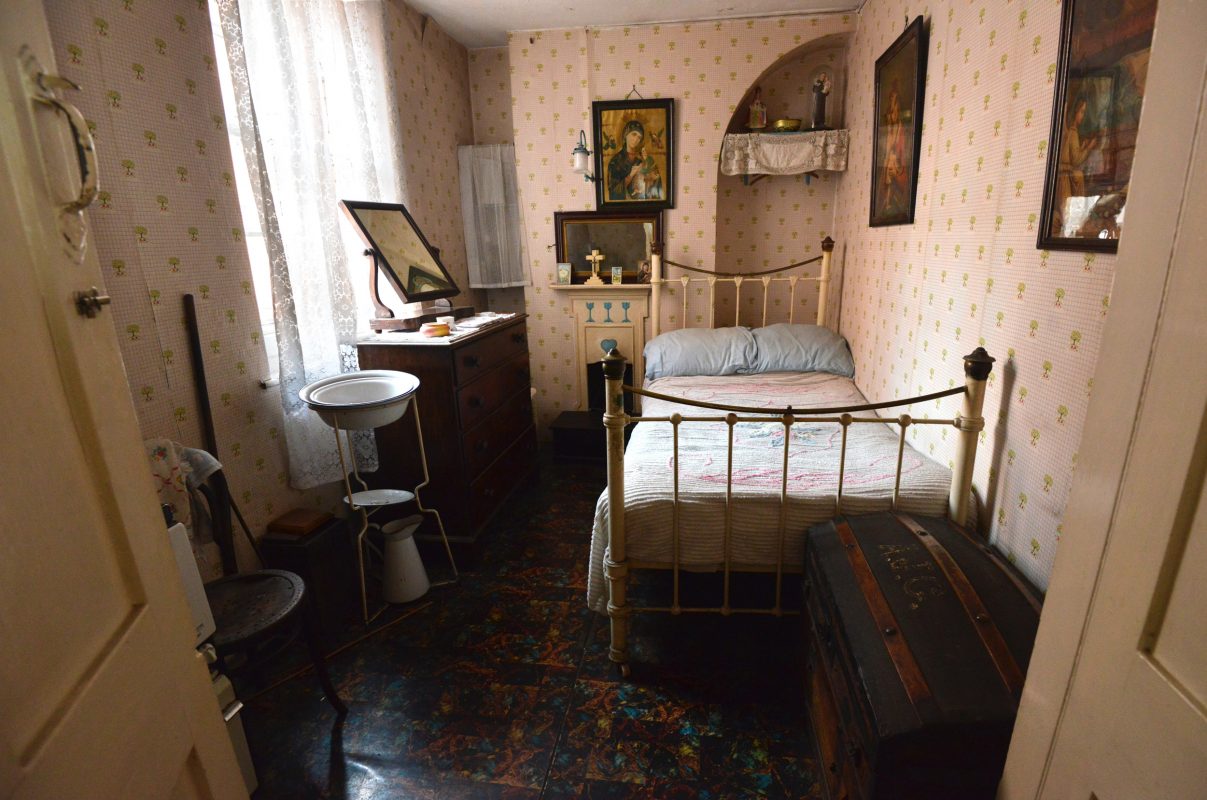 When it comes to ideal gaffs, most people dream big. A country mansion surrounded by Sika deer. A penthouse apartment with toilets by Philippe Starck, perhaps – or a paradise island guarded by sharks with lasers attached to their heads.

Nellie Molloy, however, dreamed small. Beautifully small. No. 3B, a snug flat buried within the Iveagh Trust complex off Patrick Street comprises just three tiny rooms. After her family signed their first tenancy agreement in 1915, Nellie and her four siblings slept in one bedroom (boys and girls separated by a curtain hung from a brass rail) and their parents the other.

Don’t be put off by its size. 3B is small, but it’s perfectly formed.

‘It’s like Narnia in the wardrobe,’ said the man showing me around (the Museum Flat is open to small groups by appointment). He was spot on. Nellie died in 2002 at the age of 95, but throughout her life, she kept the flat almost exactly as it was in 1915.

The details are delicious. At the heart of the sitting room sits old Lambert range, still set with newspaper for kindling. Above it, there is a brass rail for hanging clothes, a tasseled yellow drape hiding stove brushes. Lace curtains veil sash windows; old crockery gathers dust in the cupboards. A stand-up piano in the living room is no ornament – the family loved their hooleys, and wedding breakfasts in the flat were regularly followed by sing-songs.

Catholicism is everywhere, of course. Religious images, crucifixes and various icons like the Infant of Prague are dotted among floral wallpaper and family portraits. One bedroom contains a shrine to the Virgin Mary with a brass skirting fashioned from old artillery shells (it was made by Nellie’s father, Henry). Her own dresser remains peppered with hairclips, perfume and Holy Water. Above it, a little cushion is riddled with clothespins.

The Iveagh Trust tried to modernise 3B several times (there is no bathroom or running water), but Nellie always refused – preferring her space as her family had kept it, and perhaps fearing she might not get it back after any refurbishment. She was clearly spirited: Nellie served as shop steward at a linen company in Harold’s Cross before leaving to look after her aging mother. She never married (though she is said to have declined an offer of marriage from “a disappointed Kilkenny man” in the 1940s).

After her death, the Iveagh Trust purchased the contents of her flat, maintaining it as a museum that grows more magical with every passing year.

Pól Ó Conghaile is the author of Secret Dublin: An Unusual Guide (Jonglez, €17.90).