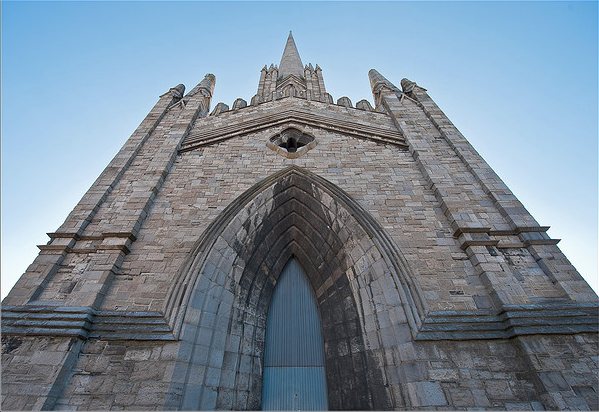 The Black Church is a landmark on Dublin’s northside. It stands in the centre of the road in St. Mary’s Place, just beyond the top of Parnell Square. It gets it’s nickname from the black calp limestone used in its construction, which when wet takes on a particularly dark and funereal appearance. Designed by architect John Semple in 1830 it is typical of Semple’s idiosyncratic architectural style. The Black Church has always held a special place in my affections. As a child I went to school in St. Mary’s Place CBS, which looked out onto it. Because of its brooding gothic appearance it attracted a host of colourful anecdotes. The scariest, as far as we youngsters were concerned, was the assertion that if you walked three times, anti-clockwise, around the Black Church at midnight you would meet the devil. None of us ever tried it. The fact that we weren’t allowed out on the streets at midnight was of course something of a disincentive, but I think children in the 1950’s might anyway have been more awed by superstitions than might be the case today.

The church has an amazingly solid construction, there being no conventional walls or roof, but instead a parabolic vault which served the purpose of both.  The windows are tall, narrow, lancet slits. Maurice Craig, in his book Dublin 1660 – 1860 relates that a story was in circulation at the time of its construction, which might go some way to explaining its excessively sturdy qualities. It was claimed that Archbishop Magee, the Church of Ireland archbishop of Dublin at the time, became more than a little paranoid in his later years and suffered from delusions causing him to refuse consecration to any church which was not capable of being used as a fortress. His great fear seems to have been that the protestant population of Dublin would be massacred while at worship, and that all steps should be taken to ensure that the congregations could, at a moments notice, transform themselves into an armed militia and, in the manner of Rorke’s Drift, withstand siege and drive off the marrauding natives. The Black Church would certainly have served this purpose well.

Today the Black Church stands rather forlornly in the road centre location, with northbound traffic swirling around it. It has long since ceased to be a functioning church and is now used as offices.