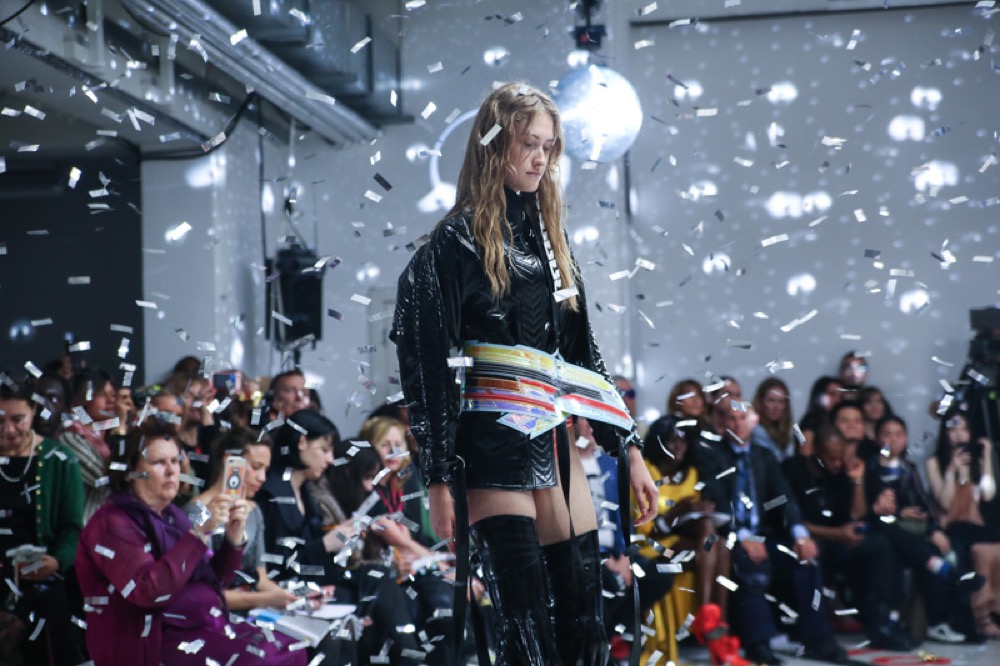 A tapestry of talented Irish designers credit the Royal College of Art in London for their metamorphoses. We speak to them and their head of fashion Zowie Broach.

“It’s funny how, without them researching where they’re from, the spirit of the land courses through them”

Whilst eager in her effusions, make no mistake: Zowie Broach isn’t one to bestow indiscriminate praise. Evidenced from her Boudicca days onwards (an avant-garde fashion label she co-founded with Brian Kirkby, side-stepping sartorial convention since ’97), Broach’s eager eye for talent-spotting is unmistakably sharp. Subsequent strides into fashion education — encompassing stints at the University of Westminster, Parsons, et al — have proven her a consummate champion of students-as-individuals. Five years into her reign as RCA’s Head of Fashion, this stance feels more solid than ever — copy-and-paste course material is swapped for a “cultivation of unique voices,” all of whom comprehending fashion’s core attributes: “craft, identity, expression and storytelling.” So, when she speaks highly of Ireland’s creative essence — citing, in particular, her department’s profusion of Irish design talents — her words are heartfelt, and by no means a handout. “We have a sleuth of the Irish who are doing phenomenally well! It’s funny how, without them researching where they’re from, the spirit of the land courses through them… We’ve gotten these deeply curious, deeply passionate designers who [exhibit] such strength and drive.

There are myriad reasons why RCA and its imaginative Irish are so well-suited. The former has revolutionised design tutelage in recent years, evolving with particular fervour following Broach’s arrival. A penchant for creative cross-pollination has characterised her approach: the college’s studio melds menswear, womenswear and accessories students, their domains traditionally divided, while idiosyncratic projects spawn partnerships with scientists and philosophers. In short, they haven’t so much pushed the fashion-ed envelope as set it aflame. RCA’s Irish clan, meanwhile, embody a “raw, creative energy” that surges through their bloodstream, alongside a natural capability towards craft — but within this acclaimed cohort, comprising MA Fashion students and alumni, no two design identities are remotely the same. Among 2017’s graduates, Michael Stewart displayed a resoundingly-strong vision for “couture, shape, form and fluidity,” while Colin Horgan encased his empowered women in PVC and tech-enhanced textiles. 2018 welcomed the emergence of Sinead O’Dwyer, whose visually-arresting work dismantles the damage of body elitism. As the countdown to 2019’s final-year showcase reaches its home stretch, two freshly-honed talents are on track to debut: Rebecca Marsden (who takes the malleability of knitwear to new heights) and Andrew Bell (who may have just formulated the future of tailoring). 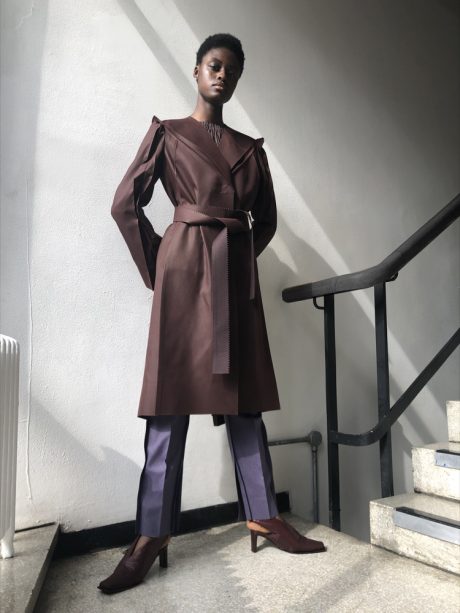 I’ve heard plenty of fearful whispers from fashion’s top-ranking institutions: crying, cruelty and non-constructive criticism seem to make daily appearances on campus. RCA seems remarkably bereft of this, whilst encouraging harder-than-hard graft from its students. In consequence, it is consistently lauded as one of the world’s best fashion schools. Broach wasn’t tempted by Nuclear Wintour tactics when she took over from Wendy Dagworthy in 2014 — she’s never been one to uphold the fashion-industry food chain. Indeed, she regards mentorship as “very much a two-way relationship: I love this idea of putting freedom and wisdom together.” For most RCA students, they enter with one sense of their design direction and, exposed to a cornucopia of resources and workshops, emerge from the MA entirely different. O’Dwyer felt this shift from her first days in the college, recalling “a tutorial with David Kappo, who was adamant that the work I first presented him was not going to be what my later work was about. It pushed me to figure out what I was really interested in,” which led her to spend countless hours in the Resin Studio, honing her (now signature) flair for mould-making and a fibreglass finish. Horgan, moreover, regards the MA course as “a visual and emotional journey of personal research,” wherein students are “stripped away from all the fluffiness of who you think you are — because you make nice jackets with no substance — to make meaningful work. Believe me, the methodology is like a foreign language at the start: when I entered I thought I was just improving what [design aesthetic] I already had, but it’s not so straight-forward. You really have to look in the mirror at yourself and face curiosities head on. While it was extremely challenging, it impacted massively — I think Zowie left me out of a cage the minute I walked in.” 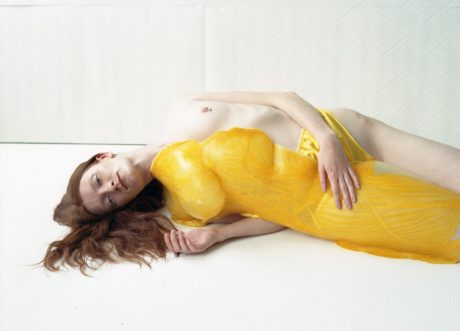 Most Fashion MAs are crammed into one year, allowing little to no space for experimentation. By contrast, RCA’s two-year masters — whilst demanding equal amounts of work — allows students to fully absorb their surroundings, formulate inventive collaborations and engage with unchartered territory in both materials and techniques. “Other MAs are maybe more of a conveyer belt, where you go in and start straight away on something that you already see and know, but RCA centres on the unknown,” affirms Bell. O’Dwyer is adamant that “I couldn’t have developed or learnt any new techniques to the extent that I did without two years, there’s no way,” while both Bell and Marsden took their first year to focus on technical work, skill-building and digital design programmes. By the time they strode into second year, Bell declares, he was already armed with “a toolkit through which I could produce my collection, [equipped with] techniques which took the hallmarks of disposability and re-articulated them to create something desirable.” Both years are peppered with off-the-wall projects and thought-provoking discussions, designed to unlock the untapped zones of students’ potential. Mirror Mirror is a stand-out example. Challenging students to “consolidate exactly who you are into one given moment, item, sound, smell, gesture,” participants prep a quick-fire presentation or performance with only a week’s notice, showcased to the college. 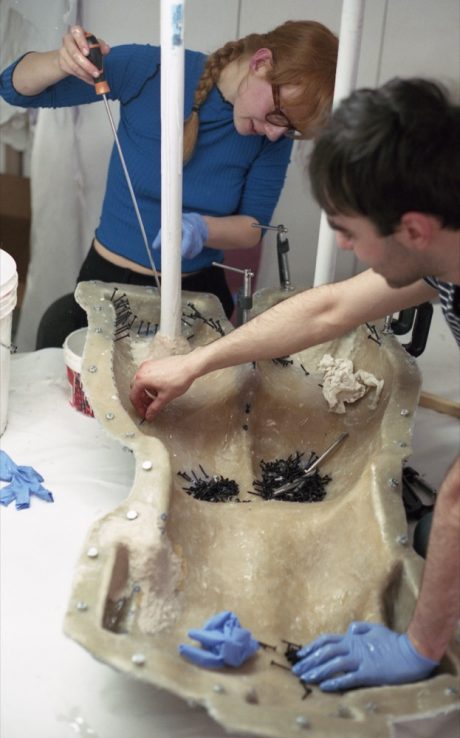 Bell remember it being “a very tough week — she told us to switch off our phones, not read the newspapers the morning of the show… you had to really distil whatever it is that you are.” He considered the project “a real staking of your visual identity… there is no stone that’s left unturned because, as an industry, fashion is no longer just about clothing.” He crafted “these branded, conceptual clips,” which symbolised the manner in which he works — “I don’t bind my portfolio, it’s presented loosely: I [merge] multiple elements of high and low, the luxury and the lo-fi. I presented in RCA’s beautiful, Brutalist elevator, in a space that levitates between high and low, rough and smooth.” During Horgan’s Mirror Mirror week, he had a collaboration project which pulled him to Copenhagen, arriving home the night before his presentation with nothing planned, but “the morning of the presentation, it came to me. I slipped off my runners, put on a pair of heels… Waited for my turn to be called. When the thumping music dropped, I ran out and completely flipped myself into the air, landing onto the heels. I let out a confetti canon while strutting up to all the tutors and students watching. I couldn’t believe the applause I got after. Whatever Zowie had seen in this presentation secured me to close the RCA [graduate] fashion show with techno music, confetti cannons and disco lights! Mad!” 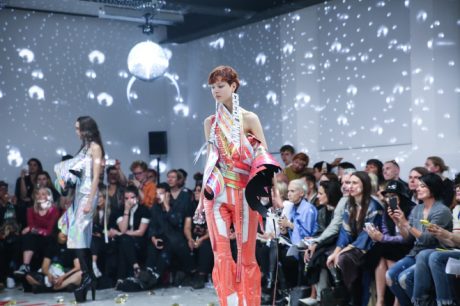 With fashion’s finest gatekeepers primed to attend RCA’s MA show, Marsden and Bell have conjured up some incredibly rousing work. In exploring themes of escape and release, influenced by coastal footage of “great waves of sea foam channeled through limestone,” Marsden has seamlessly melded fashion with performance/sport-luxe wear, pairing “structured, ordered silhouettes” with pieces of “organic fluidity.” Her collection follows two months spent in Shanghai for the Santoni Pioneer Program, which introduces five knitwear and textile designers — sourced across the globe — to sustainable knit innovation. Most of Bell’s clothing is “completely unsewn, instead taped, bound and sealed,” while shoe and perfume projects are woven into his final work. With strong influences from “packaging, disposability and the delocalisation of online shopping,” his designs are flat-collapsed, razor-sharp and sonic-welded; a strong signalling of future aesthetics.

One couldn’t omit Kildare Village’s pivotal role (spearheaded by Aisling Farinella) in fortifying Irish Design’s ties to RCA, a fact testified by the Kildare Village Fashion Scholarship. Starting life as a €15,000 bursary bestowed to Stewart, it was upgraded to a full-fee scholarship when awarded to Bell; their financial needs as conspicuous as their craft skills. Considering the only other scholarship covering this MA hails from Burberry, RCA’s appreciation for Irish creativity (and its rightful place on a world-renowned platform) is crystal clear.  “Yes, we have the language of fashion, the practice of fashion at [the MA]’s core, but we also pull the word fashion apart, look at all the spaces in between,” Broach reiterates. “For me, fashion can weave into science, into philosophy, into the innovation of digital space, into gaming; all those areas. We strive to ask questions, rather than just add in to what exists.”