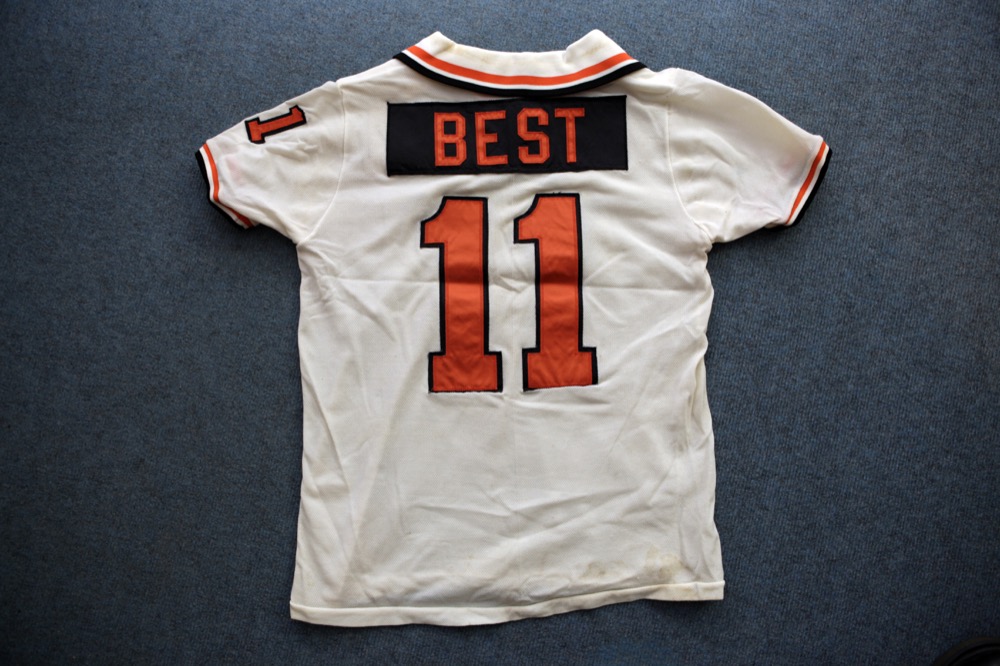 Quiz question:  What do Kelloggs, Northside Shopping Centre, Gateaux, Bass, Dublinbet.com and Des Kelly have in common?  Answer: All had football kit deals with Bohemian F.C.

Graham Keogh answers this in a flash! Graham knows a lot about football shirts – he has hundreds. Not replicas, but actual shirts worn by players including the likes of Best, Cantona and Barnes. Want to see the evolution of the Shamrock Rovers shirt since 1980? You’ll find this in Graham’s collection which is available online at footballshirtcollection.com. But first, let’s check his answers to these questions…

When and how did you start collecting?

The discovery of eBay in the ‘90s rekindled a dormant love affair that hasn’t stopped since! The auction site gave access to shirts all over the world and, at the click of the mouse, I was soon on a downhill slope towards a rather large collection…

How can you prove that a player actually wore a shirt? 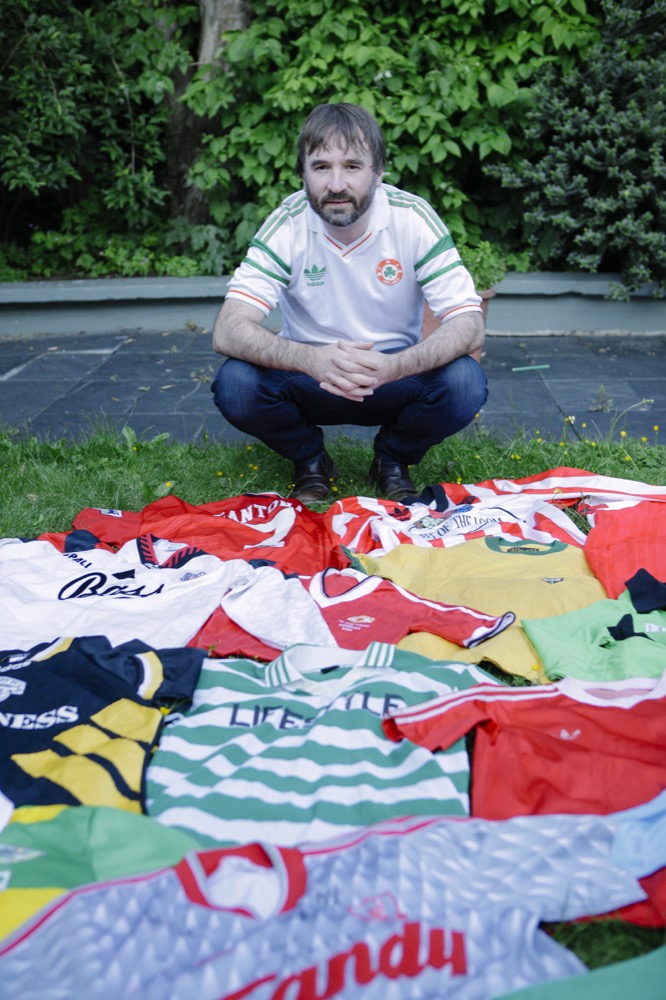 Provenance is a huge part of it. If a player hands you their shirt after a match and it has that wonderful post game smell, it’s fair to say it’s real. Other than that, photo matching, post-match swaps and sourcing it directly from clubs; former players and kit men are trusted ways to ensure it’s genuine. However, it’s always ‘buyer beware’ as there are lots of fakes in this game.

What are you currently searching for?

I’m always on the lookout for any League of Ireland match-worn shirts. They are tough to get as most players are issued a shirt or two for the season. Often, they are auctioned off or given to the players sponsor, so it adds to the challenge. The older ones were often used so much they fell apart, or they ended up in the bin.

Where do you buy them?

Ever hit the jackpot in a charity shop?

A few times, though the oddest was when I picked up a Dundalk F.C. training shirt, initialed with M.C., used years ago by their current general manager Martin Connolly. I wore it once to a game, and while walking past him he gave me the oddest look, as to say where did that come from! So, you never know what you might find out there.

Do you ever sell any of your collection?

I am involved with some other like-minded collectors who come together regularly in The Back Page pub to basically get rid of the way too many shirts we’ve accumulated. It’s a social thing as anything, we’ve done it there for over five years and the demand for the classic shirts has never been higher.

Is there anything that distinguishes your collection from others? 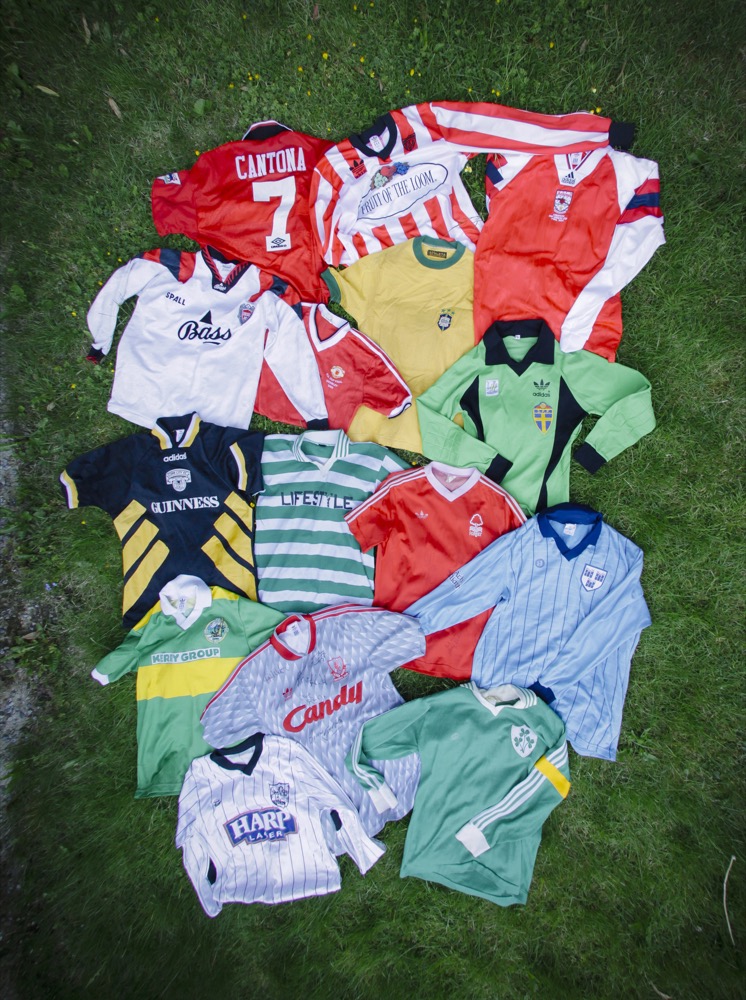 Most collectors will have cross over, and often pick up things that appeal. Mine is very eclectic, from League of Ireland to Irish international, to GAA county shirts to Jordan F1 race suits. I am drawn to quirky pieces as much as anything, so not as focused as others say on one club or team.

It has to be the 1980s, simple classic designs which provided football with some of the most iconic shirts of all time. The Ireland, Dutch and Soviet tops from Euro ’88 are stone cold classics.

And the worst? Why?

I don’t like most modern shirts, they do nothing for my middle-aged physique….

Haha! With aerodynamics dictating modern styles, do you think there will ever be a return of the baggy shirts worn in the 1990s?

Doubt it, I think you could fit three to four modern footballers in an Irish jersey from the ‘90s.

What is the oldest jersey you have?

A 1923 Scotland amateur shirt worn against Ireland. Interestingly, it came with a match photo from the family who sold it, so nice bit of history to go with it.

…and finally, to quote Haircut 100, your favourite shirt? 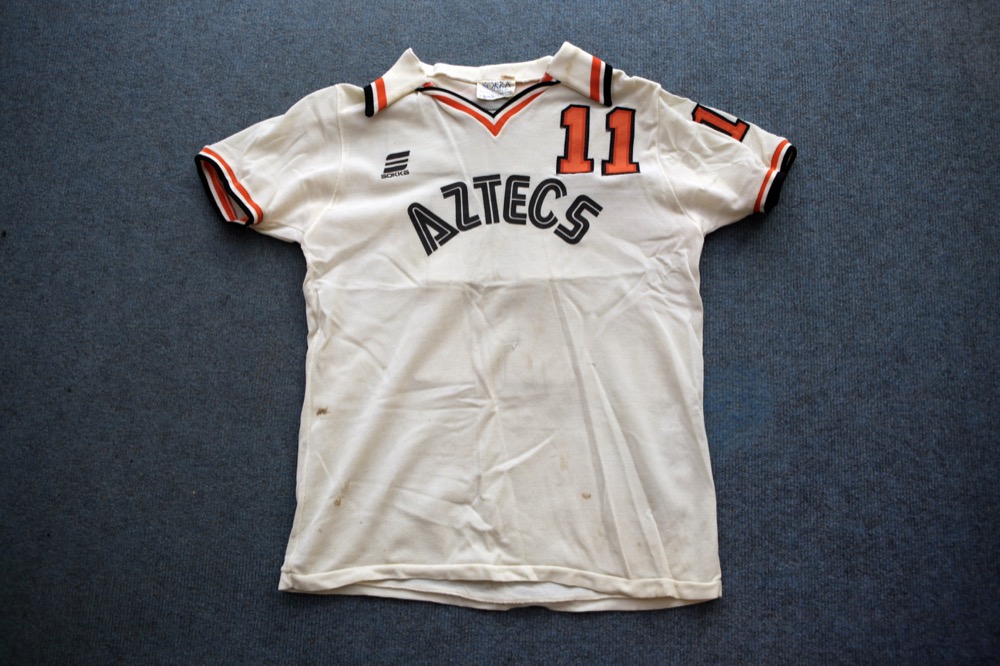 A George Best LA Aztecs shirt from 1977. The Seventies NASL jerseys are rare anyway, but then add the legend of Bestie into the mixer and you have one for the vaults.

All photos by Graham Keogh