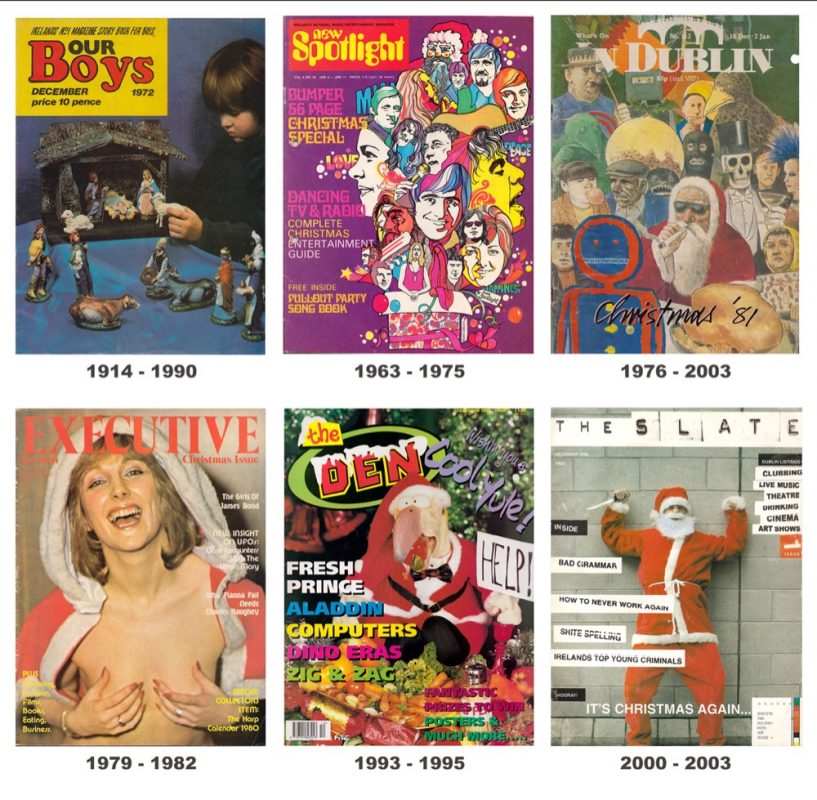 I still expect to find a magazine in my Christmas stocking. A bumper seasonal issue with year-end reviews and best of lists or maybe a niche publication to be slowly savoured over the holiday period. So this month, let’s look back at old Christmas covers from Irish magazines that are all long gone, dead and buried. The ghost issues of Christmas past.

The Christian Brothers edited and published Our Boys promoting it as “wholesome, Catholic and patriotic with enthralling stories, interesting articles, wit and humour, sport, stirring national ballads and Irish language features”. First published in 1914 and every month until 1990, it is the oldest ghost in our selection. And its cover. from 1972, is the only one here without a Santa – but we won’t crib about that.

New Spotlight was the biggest and best Irish pop magazine of the 1960s and covered music, fashion and items of interest to the younger generation. Originally published in Cork as a monthly, it moved to Dublin in 1964 and by 1967 it had a weekly readership of 200,000. The wonderful illustration of Irish showbiz stars on this 1970 cover is by Kevin O’Brien.

In Dublin started out in 1976 as a pocket-sized listings magazine but soon grew in size (to A4 in 1979) and stature. Through the following decades, it established itself as a consistent seller with its counter-culture features and quality writers (Colm Tóibín and Fintan O’Toole to name just two). But by the late 1990s, it was the adverts and not the articles, which attracted the most attention. In 1999, believing some services advertised in the magazine might be reasonably considered prostitution services, the Censorship of Publications Board banned In Dublin for six months. Undeterred, and much to the annoyance of the censor, In Dublin, went ahead and published its next issue but just changed its name to ‘Dublin’. The cover featured here is from Christmas 1981 and is by Brian O’Toole. 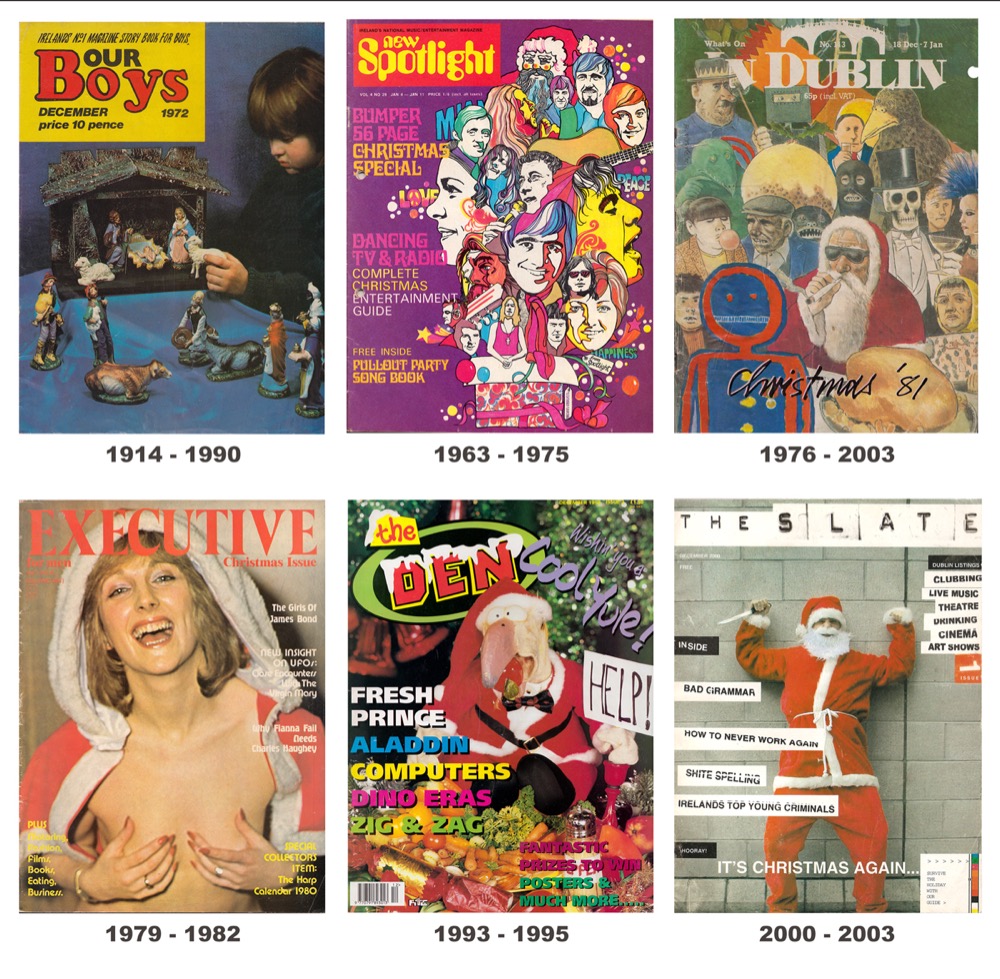 Executive launched in 1979 and described itself as “the most exciting and talked about magazine in Ireland”. Adopting a format similar to Playboy this glossy monthly featured fashion, motors, films, books and, what the magazine called, ‘photographic essays’ (ie pictures of nude women). Not surprisingly, the censor and sections of the public had issues with Executive. In 1980, a man was arrested after throwing flour into their offices as a protest against what he called “the pornographic nature of the publication”. The cover shown here is issue six from December 1979.

The Den was a monthly colourful glossy magazine for boys and girls produced to coincide with the RTE TV programme of the same name.  Ray D’Arcy was editor and it had contributions from Zig & Zag, George Byrne, Don Conroy and Simon Young.  This is issue two from 1993.

The Slate – the only title from our selection which was free – invited its readers to “laugh at all the stupid people in the city and pretend that you aren’t one of them”. The editorial also pledged “to make Dublin better by abandoning any morals we can think of, regularly engaging in blatant hypocrisy and telling anyone who doesn’t like it that they can take a flying fuck.” And over the following 25 monthly issues, that’s exactly what the Slate did. This is the first issue which came out just before Christmas 2000.