Posted 10 months ago in Restaurant Reviews 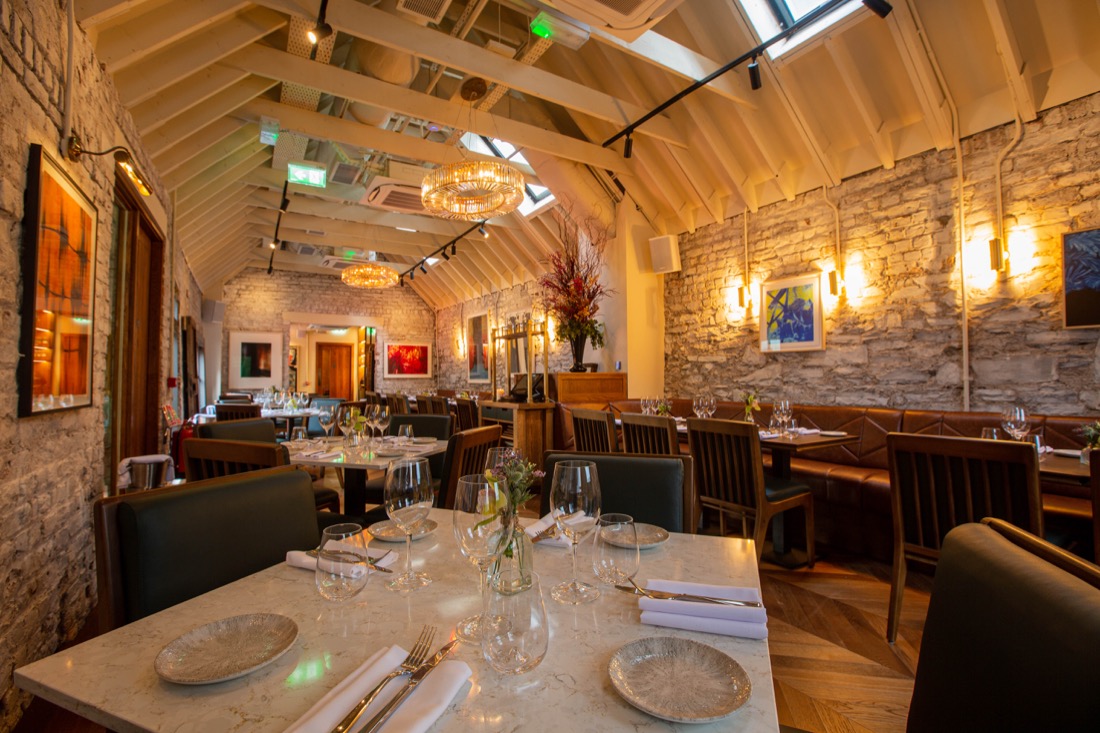 It was the dirty end of Winter and gelid sheets of weather were gusting through the lobes of streetlight as I turned into Lennan’s Yard on a recent Tuesday at about 6.30pm. The only reason to be in a restaurant at 6.30 in the afternoon is with a lunch that has gotten out of hand. That, or you work there. The reason was not a surfeit of enthusiasm either, I’d wrinkled my nose at a suggestion from my editor that I cover this place in December. No, the reason was Resy, or rather that Resy insisted that every decent timeslot for an entire week had been taken. I could take 6.45 on a Tuesday or take my patronage elsewhere. Were it not for the janky gaslines in Luna’s kitchen I would have. Who knew that this place would be so busy right out of the box? More on that later. I’m not going into the brand name narrative involving a saddler named Willian Lennan who, so the story goes, saddled on this very site in days of yore. It sounds believable enough to give me an authentic pain in my arse. Seek out the press release if you’d like to read on.

The venture involves the inevitable cabal of property developers and investment group types, doubtless headed up by the kind of guys who just get shit done, make it happen etc. One of the slides on the powerpoint deck probably ran the term ‘eatery’ up the flagpole. Restaurateur Shane Mitchell (Asador, Prado) is also a key member of the team and majority stakeholder, going forward. Chef Ryan Bell helms the kitchen, having formerly done the same for Shanahan’s (I heard strains of Riverdance as I typed that) and latterly occupied a management position with the Press-Up Group. I’ll just leave that there.

The ground floor bar is empty save for a trio drinking brightly coloured cocktails in the far corner. A young man in a red striped polo shirt is trying to impress a couple of girls by speaking in his outdoor voice. They seem to be picking up what he’s putting down. I imagine that his outdoor voice will be joined by many others when the outdoor drinking areas are opened up in the large central courtyard. Polo shirt types will be all over this place like white on rice. A couple of gin martinis – one with a twist, the other lightly soiled, are well enough put together but plonked unceremoniously onto the bare bar like pints of Fosters at Outback Jack’s. We help ourselves to cocktail napkins. The Sidecar it ain’t.

Our welcome, when we ascend to the dining room is warm but doesn’t really work to dispel the atmosphere vacuum of a near empty, barn-like, restaurant. That will surely change I think when all of those bookings (that I failed to secure) arrive. Money has clearly been spent on the design and fit-out but it’s not to my taste. You can see where the ideas join up and the (hulking, inelegant) chairs look as if they came from a catalogue. Some modern Irish pictures adorn the walls. Others will like the exposed beams and such. More power to them. The menu reads very nicely but as my mother-in-law is fond of saying – paper never refuses ink. A not so thinly veiled indictment of my profession perhaps. 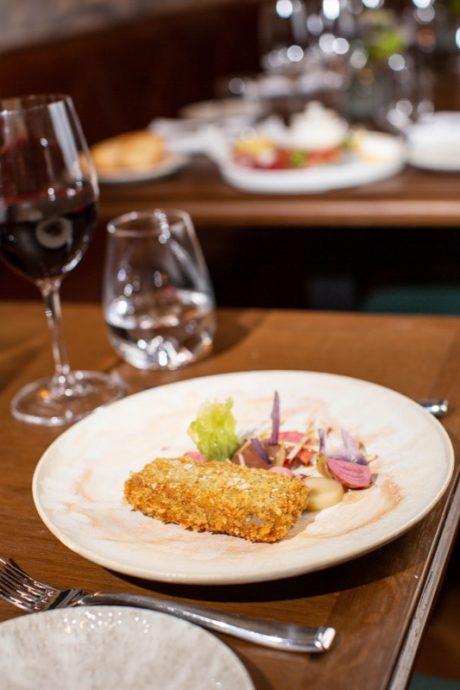 Hogget Scrumpet sounds like an old-timey kink but arrives as an underseasoned, breaded croquette that doesn’t deliver the musky funk that I expect from older sheep-flesh. Tandoori Monkfish is oddly absent that thing I associate with food cooked in this style, viz any evidence that it had been cooked in an actual tandoor, neither is it spiced in a way that I associate with the term ‘Tandoori’. 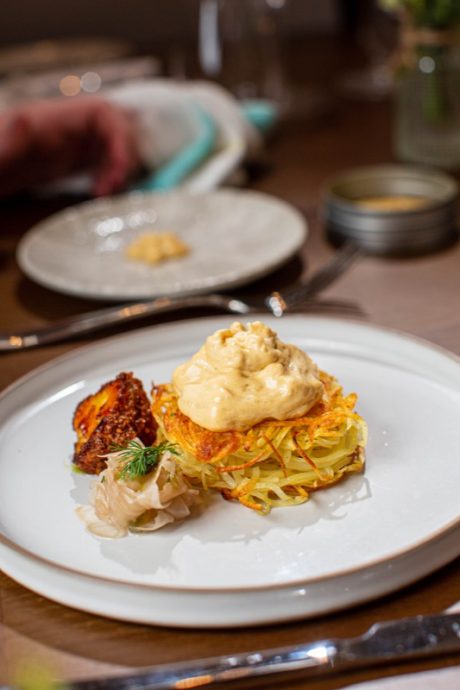 Stranger still is the ‘Salmon Potato’ that joins it on the plate. It manifests as a slightly toothsome rosti stuffed with morsels of salmon and lavishly anointed with a thermidor sauce. Said sauce has apparently been DTF since the messy lobster divorce. It’s a peculiar dish that actually eats quite well.

At this point our young server is warming to the task, making increasing baroque arm flourishes when he places a something on the table or when taking his leave. It’s as if he’s brandishing an invisible bullfighter’s cape, or guiding an aircraft in to land. He’s more entertaining than the food. Determined to turn the evening around I decide to order the fish preparation for two. I never order large format dishes because it gives me one less main course to talk about and I want to fairly account for the menu. I just care too much. I feel, in the moment, however that I can throttle my principles for Poached Wild Turbot with Surf Clams, Smoked Haddock Beignet and Langoustine Bisque. No dice. I’m afraid that dish is off tonight sir. Boo, hiss. 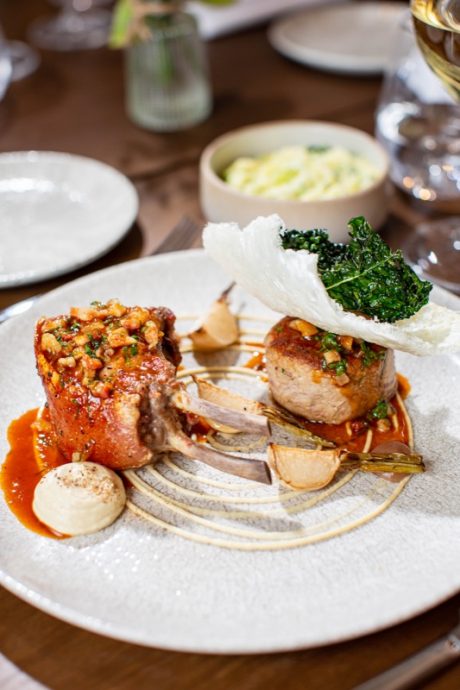 We make do with a competently composed dish of roast suckling pig and a fish special of Stone Bass that you won’t be able to order. It was fine. The menu helpfully points out a fifteen minute wait for the soufflé. We find ourselves waiting for soufflé for considerably longer than that. Thirty minutes or more pass. The seconds slow in an empty dining room. It occurs to me in real time that Waiting for Soufflé sounds like a new-romantic band from 1983. They could have opened for Blancmange. It’s a fine rendition but won’t top many charts.

Service from a number of young floor staff is attentive and eager to please but made slightly silly by the too serious bearing, which I presume was instructed. It’s too stiff, too napkin across the forearm. Upselling brands (more than once) like Whispering Angel when I’ve already stated what I’d like to drink also rankles. After two years of housebound hunger the appetite for restaurant reservations appears to be voracious. Legitimately so, not like the phantom Lennan’s Yard bookings that never arrive. I make no secret of my dislike for such glossy, big-box, restaurants. They tend not to be built from the kitchen out. It’s also possible that it has become virtually impossible to stray from this model if you want to turn a profit. I don’t write about maximising profit in the hospitality sector. Nevertheless, this place right now feels like an investment opportunity with food upstairs, rather than a restaurant that takes pleasure in feeding people well. Dawson Street is the perfect place for it. 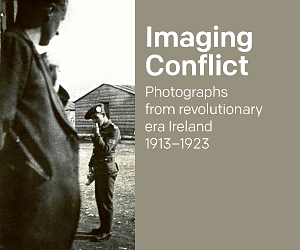 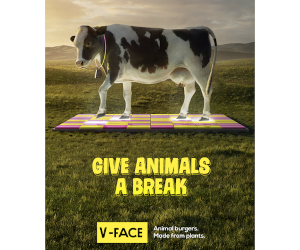