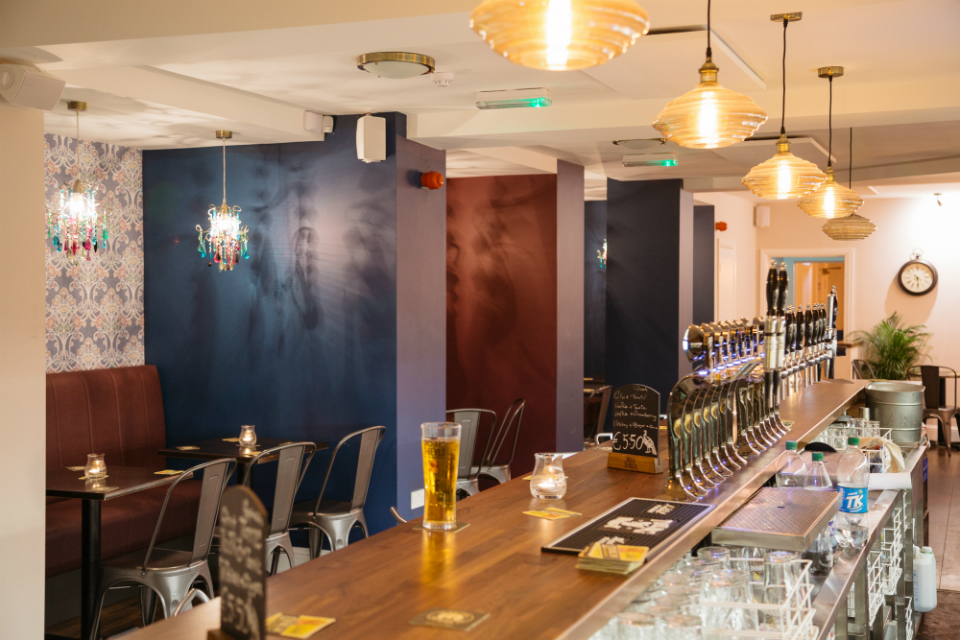 Not to be confused with the Jar, the Jug is a renovation of what once was the Dean Swift on Francis Street, halfway between Thomas Street and the Coombe. I cannot attest to having ever set foot in the Dean Swift, but, like the nearby Liberty Belle, it gave off the distinct vibe of being a local’s pub, though not one with any particular reputation, and that slumming toffs from D6 would probably feel more at home in Fallon’s or the Thomas House, depending on which end of the street suited your purpose.

The Dean Swift’s small, dark stained glass windows and enjoyably off-kilter signage are now gone though, and new, larger front windows allow light to penetrate and fill the place. Indeed the main space inside could hardly be less traditional. The Jug instead has plumped for floral patterned wallpaper, offset against the Bismarck blue walls and a fancy herringbone-tiled main bar. It’s well-lit and the chairs and tables are almost more like those found in a café or restaurant than a bar, which ultimately is sort of what The Jug feels like. The main bar is also appointed with two large televisions showing sport, and judging by The Jug’s social media channels, sport makes up a big part of its draw.

On our visit however, the clash of perpetual La Liga also-rans Valencia and Villarreal is not high on anyone’s priorities. Instead, the bar is populated almost entirely by women in a variety of different sizes of groups, and all seem to be using the spot as a jumping off point for the night, as the attendance and volume swells around 10pm before dissipating drastically. The volume situation is not aided by an unamplified jungfella maintaining the bad name of lads-with-acoustic-guitars everywhere by battering us with a seemingly infinite variety of three chord tricks (one of which sounded suspiciously like ’90s one-hit-wonders Deep Blue Something’s Breakfast At Tiffany’s). It felt like the kind of situation where someone felt obliged to provide entertainment without realising that everyone was already entertaining themselves in conversation.

It’s the only notable misstep of the night though, which included delicious and extremely reasonable (€4.60) pints of Guinness and the always immensely welcome table service. While by no means a hugely remarkable pub just yet, the Jug is indicative of the changing face of this part of the Liberties.